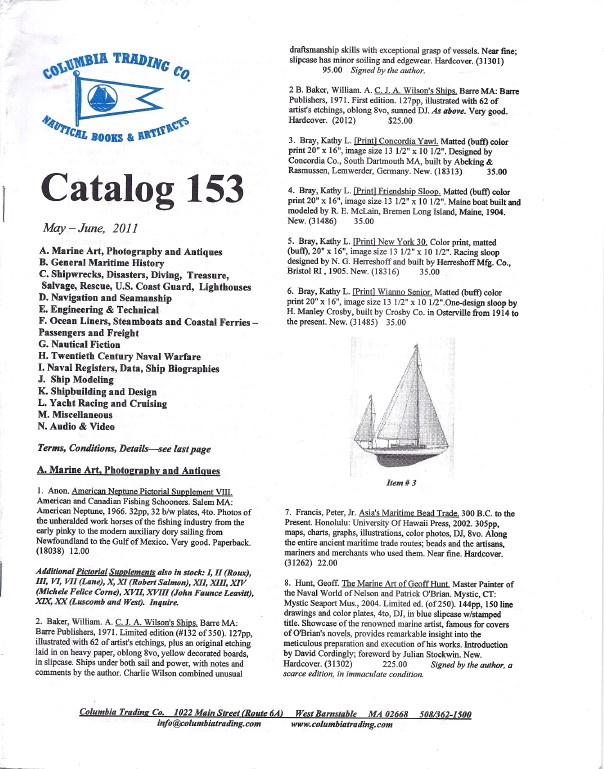 The Columbia Trading Company has released Catalog 153. Columbia features seafaring works, books about boats, sailing, naval battles, shipwrecks, yacht racing, ocean liners, and just about anything related to things that float on water and carry people. This may not be a catalogue for the landlubber, but just about anyone else will find something of interest. Actually, even the landlubber will, as the accounts of shipwrecks will confirm their greatest fears.

There are a few titles that certainly reflect creative writing skills, though I can't vouch for the content. My favorites are She Captains, about women sailors, and Fish and Ships, about fishing. One thing that can definitely be said about this catalogue is there is nothing that will break your budget.  Here, now, are some of the nautical works in the latest catalogue from Columbia Trading.

We are all familiar with the famed mutiny on the Bounty, and the official accounts of the ship's captain, William Bligh. The Bounty was seized by mutineers on its way from Tahiti to the Caribbean, transporting breadfruit trees. The mutineers took the boat back to Tahiti, and eventually on to obscure Pitcairn Island, while Bligh led his loyal sailors on a harrowing, 3,500 mile journey in a small boat back to rescue in Batavia. While awaiting return to England, Bligh sent several letters back home, which were published in facsimile for the first time in 1989 in Awake, Bold Bligh! edited by Paul Brunton. The first letter, to his wife, begins, "Dear Betsy, I have lost the 'Bounty.'" Item 46. Priced at $30.

Item 113 is the official report of the sinking of a ship that led to war:  Message of the President of the United States Transmitting the Report of the Naval Court of Inquiry Upon the Destruction of the United States Battle Ship Maine in Havana Harbor. February 15, 1898… The Maine, sent to Havana harbor to protect U.S. interests when Cubans were revolting against Spain, suddenly exploded, killing most of the men on board. Immediate suspicions were that Spain blew up the ship, but the cause is debated to this day. The Court's inquiry concluded that a mine caused an explosion, which led to a more devastating explosion of ammunition. It could not fix responsibility for the mine. Later examinations have disputed a mine as the cause, blaming it on a coal fire, which led to the explosion of the ammo. These two hypotheses are still debated, the cause yet unclear. Nevertheless, the incident raised great emotion in the United States, where people blamed Spain. The famed battle cry "Remember the Maine," was raised, and its sinking became a major cause of the Spanish-American War. $125.

Item 532 is an account of a somewhat harrowing trip from Nova Scotia to Greenland. The title is Under Sail to Greenland. Being an Account of the Voyage of the Cutter "Direction," Arthur S. Allen, Jr., Captain to Greenland in the Summer of 1929. Allen, Jr., whose father was wealthy, was 22 years old when he and two others embarked on their trip. One of the other two was noted illustrator and writer Rockwell Kent. Twice along the way the ship was nearly wrecked, and after pulling into a cove in Greenland, a storm hit, the Direction was battered into the rocks, and sank. The three scrambled to safety and were rescued. Kent stayed on, eventually writing about his experiences on the trip and in Greenland, where not much happens besides it getting very cold. Allen, who survived the shipwreck, returned home only to die in an automobile accident two weeks later. His father, and others produced this book, using the younger Allen's notes and logs, as a tribute. It was published in an edition of 900 copies in 1931. $175.

If you would like to read a little more about Greenland, item 202 is Red Flannels and Green Ice, by Arthur Pocock, published in 1949. Columbia Trading describes the book thusly:  "Rollicking account of the Coast Guard's WW II Greenland patrol:  pregnant seals, of women and fish, sex life in a deep freeze, woman's place is in the igloo, drunken pigs, and other nonsense." $25.

Item 39 is a 1935 biography by Thomas Boyd:  Poor John Fitch. Inventor of the Steamboat. Fitch was first out of the box, ahead of Fulton and others, but his financial backing was limited. He did develop a steamboat that used oar-like devices rather than a paddlewheel to move, and ran service out of Philadelphia in 1790. However, he lost his monopoly on the routes and was never able to make a go of the business for long. $45.