The Pacific from the Arader Galleries 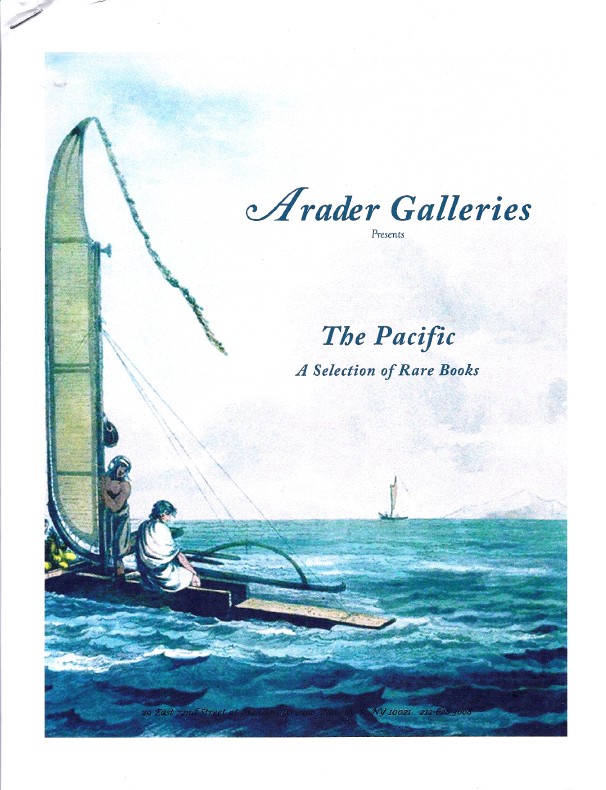 The Pacific from the Arader Galleries.

The Arader Galleries has issued a new catalogue:  The Pacific, A Selection of Rare Books. This is primarily a collection of Pacific voyages, dating from the early 16th century until the 19th. Destinations included Australia, East Asia, the west coast of America, and numerous islands, from the large, such as Japan, to the small atolls that dot the Pacific Ocean. Of course, anyone involved in a circumnavigation of the globe would have to spend some time in the Pacific. These brave explorers risked their lives, a gamble they often lost, to provide their European compatriots with knowledge of the unknown world far from home, be it geographical, natural history, scientific, or anthropological. Here are some of these great works that relate to Pacific exploration.

Shortly before the greatest of all Pacific explorers, James Cook, set sail on his journeys, the French Captain Louis Antoine de Bougainville began what would be the first circumnavigation by a Frenchman. Bougainville was assigned the task of turning over the Falkland Islands to Spain, in accordance with diplomatic agreements. Once that job was complete, he headed through the Straits of Magellan and across the Pacific. He stopped at numerous islands, bringing back detailed information about the natural history and peoples he encountered. The popular tropical flowering vine, the bougainvillea, was named for him. His book, published in 1771, two years after he returned, is entitled Voyage autour du monde… Priced at $14,000.

While Bougainville was still at sea, James Cook began the first of his three voyages. The first was intended to observe the transit of Venus, which would help with the difficult task navigators faced in determining longitude. However, his secondary mission would be to learn more about the Pacific lands, particularly Australia and New Zealand. On his second voyage, Cook would travel far south, so far on water as to disprove the widely held belief that there was a massive continent covering the southern part of the globe. Cook's third journey would take him even farther - up the west coast of North America in an unsuccessful attempt to find a northwest passage. Cook would discover Hawaii, an unfortunate discovery as he would lose his life to a misunderstanding with the natives. Offered is a complete set of first editions of the official accounts of Cook's three journeys, eight text volumes and two atlases. $74,000.

The French would be back in the Pacific in the 1780s with another attempt to circle the globe. This time the leader was Jean Francois de la Perouse. La Perouse sailed in 1785, and his explorations were extensive. His stops included California, Alaska, Hawaii, Japan, Russia, and ultimately, Australia. Just as the French had wanted him to investigate what the Spanish were up to in California, they later wanted to know what the British were doing in Australia. He sailed into Botany Bay, enjoyed a cordial visit with the British, and headed west, never to be seen again. It would be 40 years before his wreckage was finally discovered and the mystery solved. Fortunately, La Perouse sent material back to France at several of his stops, allowing for the publication of his account in 1797, Voyage De La Perouse Autour Du Monde… $52,500.