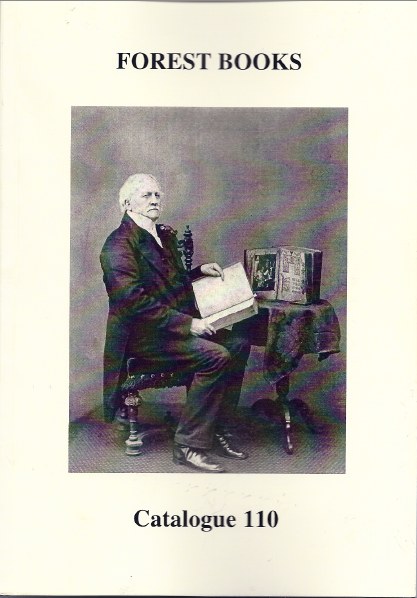 Books for bibliophiles from Forest Books.

Forest Books has published their Catalogue 110. Bibliography, Bookbinding & Reference. This may seem like a niche field, but there are over 600 titles available. While Forest Books is located in England, the selection knows no boundaries. It is international in nature. Among the items offered are numerous catalogues of great collections, some a bibliographical accounting, others prepared for the auctions which dispersed them. What individuals once possessed in their personal libraries, before so much material was scooped up by institutions, is astounding today. Here is a look at some of the material Forest Books is offering for sale.

You may not recognize the individual in the photograph on the cover of this catalogue, but he is perhaps the greatest collector ever. He collected, quite literally, everything. While his book collection was extensive, he is even better known for his manuscript and ephemeral material. Much of it was one of a kind, and he quite literally saved an enormous body of work from extinction. He attempted to obtain a copy of everything, and if no one could ever quite succeed at that, he came closest among private collectors. His library filled not just his shelves, but every room in his house, to the ceiling, leaving little more than alleyways to move around. Indeed, it is odd to see him depicted in such a clean space, just two books and a table, with empty walls and floor space. This could only be Sir Thomas Phillipps, and he is shown here in 1860 at the age of 68. In his hand is a 10th century Horace text, now at Harvard University, while on the table is a 13th century Gospels in Armenian. He had just purchased the manuscripts at the sale of the library of Rev. John Mitford. Item 319. Priced at £695 (British pounds, or approximately $1,129 U.S. dollars).

Speaking of the obsessive collector, item 403 is Phillipps' copy of Straker's Catalogue of a Collection or Oriental Manuscripts, Etc., Etc. William Straker's catalogue was published in 1836, and Phillipps' notations in the copy displays his need to possess everything. He has marked those items he wished to purchase, over 80% of 497 items listed. It came to a total of just over £1,250, an enormous sum of money in those days, particularly for someone like Phillipps who while of significant means, was not a man of great wealth. £225 (US $365).

Item 282 is a catalogue dispersing much of the library of one of the greatest names in the book trade, William Morris of the Kelmscott Press. The title is Catalogue of a Portion of the Valuable Library of Manuscripts, Early Printed Books, &c. of the Late William Morris, of Kelmscott House, Hammersmith. It was published for the 1898 auction of many of the books held by Morris. However, the auction was not conducted by the estate of Morris, who died in 1896. It was held by the eccentric collector Richard Bennett, who had earlier purchased the bulk of Morris' library. Bennett kept what he wanted, then auctioned off the rest. Bennett was in a buying mood at this time, but he had his oddities, such as not wanting any books over 13 inches in size. So those larger folios in Morris' collection were sent out for sale. Two years later, Bennett sold his collection to J. Pierpont Morgan, with the result that this portion of Morris' collection is with the Morgan Library today. Henry Wellcome was the largest buyer at the sale described by this catalogue, so that much of this material is in the Wellcome Institute Library now. £295 (US $479).

Item 19 is a catalogue of publications by a long defunct Edinburgh book collectors club:  Catalogue of the Bannatyne Club Publications, published in 1833. It had been founded a decade earlier by Sir Walter Scott, then a very popular British writer and poet, to print rare Scottish literature, history and poetry. It was named in honor of George Bannatyne, a 16th century Scottish preservationist who created an 800-page manuscript of earlier Scottish poems. This catalogue contains brief descriptions of the 54 works the club had published up to that time, as well as a list of members (membership was limited to 31). The Bannatyne Club would in time print 116 volumes before being dissolved in 1861. £275 (US $446).

Item 122 is a bound collection of around 20 sermons from the first half of the 19th century. There are a few interesting ones here, such as a deliberately provocative sermon in favor of Catholic emancipation by Sydney Smith in front of a Bristol audience not noted for its tolerance. However, this doesn't explain why such a collection is in a catalogue full of bibliographies. The explanation is the presence of a very rare copy of A Sermon Preached in the Church of St. Paul's, Covent Garden, in May 1828, on the Visitation of the Venerable George Owen Cambridge… The sermonizer was Thomas Frognall Dibdin, a reverend in his own right, but better known as the world's greatest bibliophile, or, perhaps, bibliomaniac. Dibdin wrote several books on his passion for book collecting, and later in life, following a depression in market prices, on how underpriced books had become. Many in the trade would agree with those sentiments today. While Dibdin's books on books sold well, his sermons were not so popular, this item having been printed in a run of just 50 copies. It is so inscribed, "Only 50 Copies printed," likely in the author's hand. £1,295 (US $2,104).