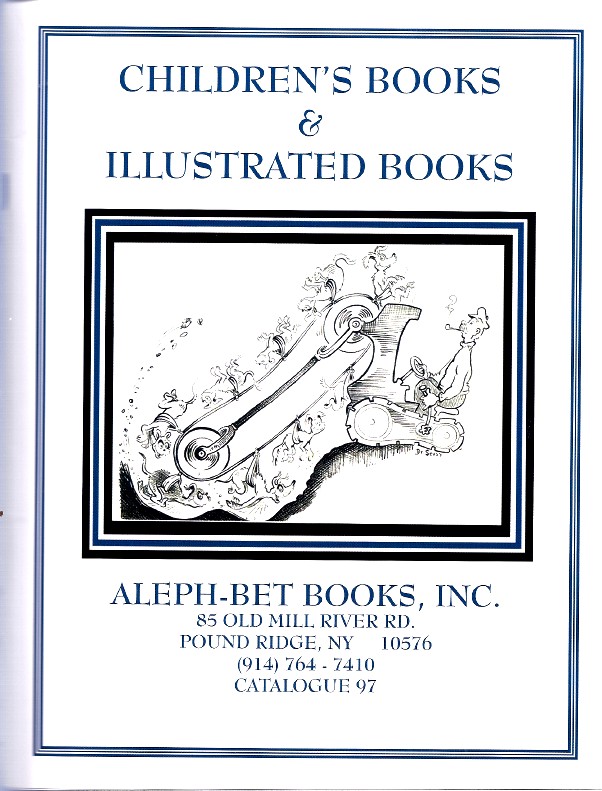 Aleph-Bet Books has published their Catalogue 97 of Children's Books & Illustrated Books. With very few exceptions, most of the material qualifies as both - illustrated children's books. There is not much that can compare to the whimsy and fantasy to be found in these titles. There is an innocence to youth that draws us back to the simple joys of childhood. That is not to say all of these books are innocent. Some carry political and social messages that, at times, can be downright ugly. After all, they were written by adults. Still, the bulk is no more weighty than Peter Rabbit or the Cat in the Hat. Sure, there may be a message about disobedience and theft in Peter's story, but it is hardly the heavy-handed approach we get in the news. These books are fun, which is why they appeal to us to this day. Here are a few samples of the 600 books being offered.

Item 57 is a first/first of a second. That needs clarification. It is a first edition, first issue of the second Oz book, The Marvelous Land of Oz, published in 1904. In some ways, it might be the most important of the Oz books. Author L. Frank Baum scored a major success with The Wonderful Wizard of Oz, published in 1900. However, that was a one-time success. It was not clear where Baum would go from there. Indeed, he would follow up with a couple of non-Oz books. What this second Oz book revealed was that the Wizard was not a one-hit wonder, but a series that could be continued indefinitely. Baum would go on to write 12 more Oz books after this sequel, and others, notably Ruth Plumbly Thompson, would continue the series at least until the 1960s, a minimum of 40 titles. More continue today though there is debate as to whether these titles are "canonical." The Marvelous Land of Oz was the first of the Oz books illustrated by John R. Neill, who would illustrate 35 of the main 40 books, and write three of them in the 1940s. Priced at $15,000.

Speaking of first editions, here is a first edition of Winnie the Pooh that probably most Pooh collectors do not have. It is Winnie-The-Pooh in one volume, published in 1934. While it contains the Pooh text, this edition is missing the classic illustrations by Ernest Shepard. There is good reason. This is the first edition of the Pooh stories in Braille. $1,850.

Item 18 is an odd alphabet book. It is Mother Goose up to date, published circa 1905 by the Glauss Shear Company. It was designed to promote the company's scissors, razor blades, and other such things you would like your children to play with. The letters are introduced though rhymes. For example, for the letter "N":  Needles and pins, / Needles and pins. / When a man marries / his trouble begins. / Needles and pins / and a pair of Glauss shears / All of his trouble / at once disappears. The rhyme does not make clear exactly how the husband is to use his Glauss shears to make the troublesome wife disappear. Item 18. $300.

Here is a book that might have made use of a set of Glauss shears:  Heads, Bodies & Legs. This is "slice book," in which those parts of the human anatomy can be separated from each other. The authors of this 1946 title were Denis Wirth-Miller and the appropriately named Richard Chopping. Actually, this book is not quite so gruesome as it sounds. It is one of those books where the pages are cut into three sections, enabling the head from one picture to be lined up with the body of a second picture and the legs from a third. It's all good fun. Item 368. $300.