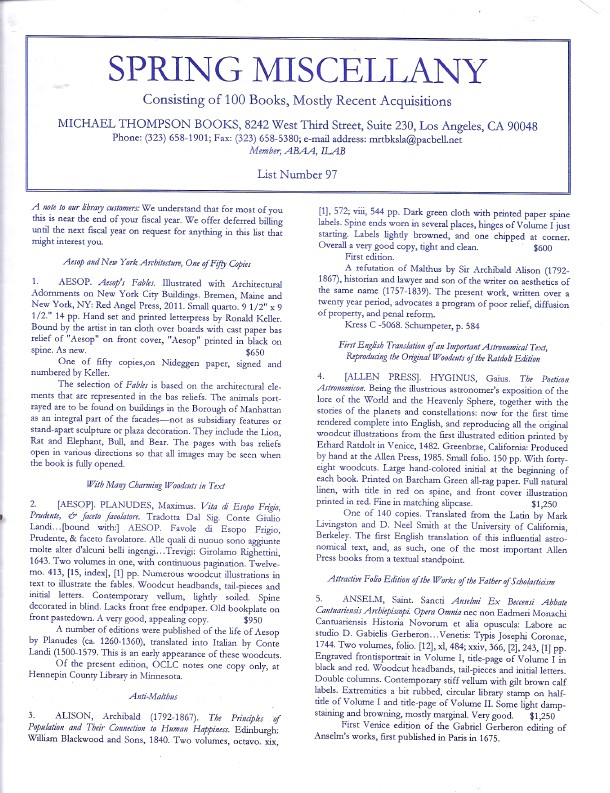 Michael Thompson Books has published a Spring Miscellany. Thompson's miscellanies are appropriately named, as there is a wide range of material to be found. What we find here in particular are antiquarian works, primarily of European origin, and fine press books, generally from the past century. It's not quite that simple as there can be just about anything here, but at least this highlights much of the material to be found. Offered is a collection of 100 books, most of them recent acquisitions. Here are a few.

Item 33 is the first script from a theatrical performance that was once, in its own way, more popular than Shakespeare in old England. It is Punch and Judy, a free-form puppet theater that played on the streets of London for centuries. Punch and Judy made its first appearance in England in 1662, but it was not until 1828 that John Payne Collier first put a dialogue to print. The play never had a set group of lines. The puppeteer would follow a loose script, often at least partly adlibbed, from behind a curtain. It involved Punch and his wife, Judy, their baby, and often a host of other characters. It was puppet slapstick, as the two would get into battles, the result of Punch's foolish behavior. It should be noted that author Collier would later be accused by many of fabricating certain Shakespeare material, though there is no sign he made up the Punch and Judy dialogue. The book was illustrated by George Cruikshank, perhaps the most notable illustrator and caricaturist of his era. It is bound with a scarce 1840s pamphlet entitled Park's Amusing History of Punch & Judy. Offered is a second edition of the main book, published the same year as the first. Priced at $750.

Item 63 is Dris Martini Lutheri colloquia mensalia; or, Dr. Martin Luther's Divine Discourses at his Table. This is a first English edition (1652) of what is better known as Martin Luther's Table Talk. It contains quotes, or at least paraphrases, of comments made by Luther around the table, as compiled by Dr. Antonius Lauterbach. The latter has been described as Luther's Boswell, an admirer who tried to preserve all of significance Luther said, though Luther did not want his unconsidered comments so published. It provides great insight into Luther, both as theologian and man. As man, Luther had his share of warts, and this book can at times be coarse, merciless, and bigoted. Luther had his opinions of Catholics, Jews, and Turks, that were not, to say the least, always kind. Still, Luther was a product of his times, and not one to be terribly concerned about political correctness. $1,500.

Item 54 is the second title printed by the pioneering private press of William Morris - Kelmscott Press. The title is Poems by the Way, which reflects the multi-talents of Morris. Along with being a fine press printer in the last years of his life, he was a novelist, poet, artist, designer, and political socialist. This personal collection was published in a run of 300 copies at Kelmscott in 1891. $2,500.

Item 42 is The History of the Life of the Duke of Espernon, the great favourite of France, by Guillaume Girard. Certainly Jean Louis de Nogaret de La Valette, who lived from 1554 to 1648, was a great favorite of the leaders of France, especially King Henry III. Henry showered La Valette with a series of titles, including this dukedom created specifically on his behalf. The Duke was a contemporary of Henry who worked his way into the King's inner circle. Though Henry died more than a half a century before Espernon, the Duke also managed to ingratiate himself to the following two kings, even though he was suspected of participating in the assassination of one. He would remain an important person in France until finally disgraced in his later years and exiled to a castle in the countryside. This book was "Englished," or as we more commonly say, translated, in 1670 by Charles Cotton, better known as Izaak Walton's fishing buddy. $650.

On June 6, 1944, known to history as "D-Day," President Franklin Roosevelt delivered a message via radio to the American public. The President issued a prayer, asking, "With thy blessing, we shall prevail over the unholy forces of our enemy. Help us to conquer the apostles of greed and racial arrogance.  Lead us to the saving of our country…" Thankfully, his prayer was answered. For Christmas that year, FDR printed up a broadside of his D-Day Prayer. Only 50 copies were printed, and they were given to a few of his closest friends at a White House ceremony. Item 76 is one of those. $17,500.