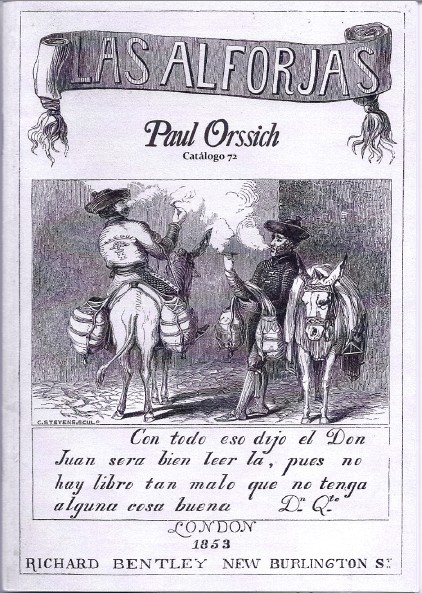 Paul Orssich has released Catalogo 72. Orssich is the London bookseller who specializes in Iberian material, along with works pertaining to the Spanish and Portuguese colonies in the New World. While the material pertains to Spain and Portugal, much of it is written in English, and some in French, as well as the Iberian languages. The catalogue itself is primarily in Spanish. While Portugal, being much smaller than Spain, and having but one American colony (Brazil), often seems like an afterthought in Iberian and South American catalogues, we find a good selection of books pertaining to this nation that was once a major force in global exploration. Here are a few examples of material to be found.

Item 120 is an interesting, contemporary look at the Caliphate of Cordoba. It was, naturally, printed much later as the Caliphate existed five centuries before printing. The title is Historia de los Jueces de Cordoba por Aljoxani. Author El Joxani writes about leading figures and social life in Cordoba during the 10th century. This period was the height of Moorish Spain. The Moors had gained control of the area during the 8th century, but the pinnacle of their rule came during the period of the Caliphate, beginning in 929 when the Emir of Cordoba, Abd-ar-Rahman III, declared himself Caliph (a caliph is a descendant of Muhammad, thus a more prestigious title). At this point the Muslim Moors from North Africa controlled all but the farthest northern part of the Iberian Peninsula, still ruled by scattered Christian tribes. It was a period of prosperity and power for the government in Cordoba. However, after the death of the second Caliph in 976, the Caliphate began a process of disintegration, with it coming to an end in 1031. This would be followed by a slow retreat by the Moors until they were finally pushed out of Iberia entirely by Ferdinand and Isabella in the late 15th century. This account is limited to the Caliphate's best of times, as its author died in 971 while it was at its peak. Offered is the first Spanish translation of El Joxani's Arabic account published in 1914. Priced at £280 (British pounds, which translates to roughly $450 U.S. dollars).

Item 2 is an English tourist's look at Europe from the 19th century:  From the Pyrenees to the Channel in a Dogcart. Actually, the author, Mrs. C.E. Acland-Troyte, was not mushing her huskies through Europe. A horse pulled her dogcart. The book was published in 1887, so she could not have driven an automobile, and Mrs. Acland-Troyte wished to visit some out-of-the-way places not accessible by rail. According to a contemporary review in the Athenaeum, Mrs. Acland-Troyte "writes pleasantly," and "enjoyed her drive immensely," though it cautions that the book is "a great deal too lengthy," and contains "some pieces of distinct padding." Think of it as getting more for your money. £120 ($194).

Item 83 is one of the most thorough studies of the Portuguese people you will ever find:  Etnografia Portuguesa. This detailed study was published in five volumes from 1933-1967, making it difficult to find complete sets. Author Jose Leite de Vasconcellos believed that a people could best be understood by knowing their past. He thereby set about learning everything possible about Portugal's cultural history. As the size of this work attests, he learned a lot. £250 (US $404).

Item 76 is an account of the formation of Portugal's only colony in America - Brazil. While Portugal had but one colony, it should be noted that Brazil far outsizes any other country in South America. Even before the land was first claimed by Portugal, the Pope had set a demarcation line - Spain got everything to the west, Portugal to the east. As it turned out, only Brazil lay to the east, while many more lands were west. However, the Portuguese would succeed in expanding their territory by taking colonies from France and Britain, who ignored the Pope's assignment of territories in the New World. Portugal first claimed Brazil at the start of the 16th century, and remained in control until after the Napoleonic wars. The Portuguese monarchy set up shop in Brazil when forced to flee their homeland ahead of Napoleon's invaders. However, when the monarch returned after Napoleon was defeated, the Brazilian people grew restless of Portuguese control and by the 1820s, the colonial era was over. Item 76 is Historia da Colinizacao Portuguesa do Brasil, published in three volumes from 1921-1926. £180 ($291).