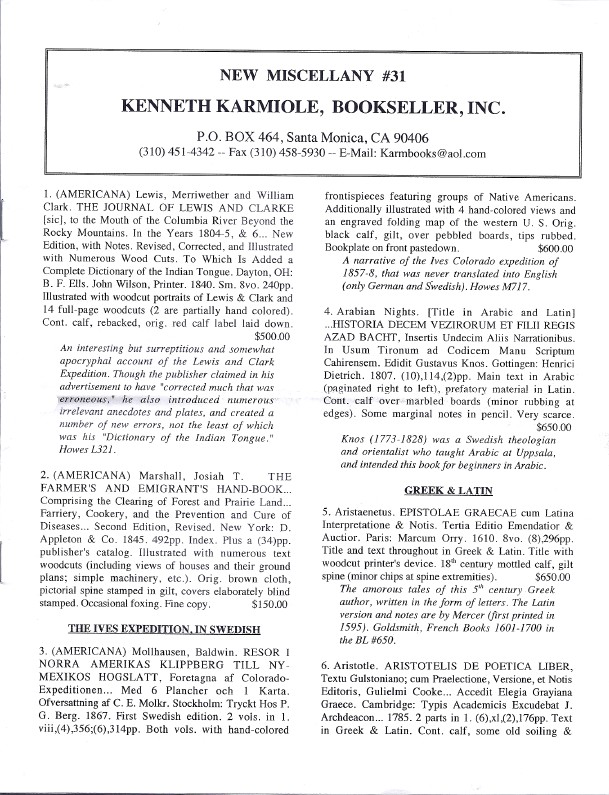 Kenneth Karmiole, Bookseller, has issued another selection of varied material. This one is New Miscellany #31. It contains primarily a mix of very old European works, with old, though not quite as old, American books. The older items are frequently in Latin and continental languages, the less ancient in English. Subjects vary. Here are just a few.

We start with an antiquarian look at ancient history:  Antiquae Romae Topographia, by Bartolomeo Marliani, published in 1534. This consists of seven "books" Marliani wrote about the topography and archeology of ancient Rome. Ancient Rome had been mostly forgotten until the invention of the printing press allowed for publication of research about the ruins that were little understood at the time. The quality of research might be found wanting by today's standards. No one was participating in archeological digs and careful examination at the time. Nonetheless, Marliani was able to bring some basic understanding of the ancient past to his readers. Offered is a first edition of a book that was reprinted numerous times during the 16th century. Item 62. Priced at $2,500.

Item 3 is a report on the Ives expedition up the Colorado River in 1857 by the artist and naturalist Heinrich Balduin (Baldwin) Mollhausen. Mollhausen was a German who befriended the great, now older German explorer of America, Alexander von Humboldt. He had already made two journeys to the American West when Joseph Christmas Ives asked him to participate in his exploration of the Colorado. They began at the mouth of the river and worked their way north as far as the Grand Canyon. Mollhausen's illustrations, some of the earliest of the great canyon, were used in Ives' official report as well as some of Mollhausen's own books. After returning to Germany, Mollhausen became a prolific writer, creating both historical accounts and fiction based on the places he had seen. Item 3 is his Resor I Norra Amerikas Klippberg… This is the first Swedish edition (1867) of a book never translated to English. It was published only in German and Swedish. $600.

Item 68 is the first English translation of a major work on the conquest of Mexico. Author Bernal Diaz de Castillo accompanied the conquistador Hernan Cortes on his mission to conquer Mexico, and destroy the Aztec empire in the process. Diaz kept a detailed narrative of the events, both from his own experiences and interviewing others. However, he never published his manuscript. Diaz died in 1585, but his manuscript languished in a Madrid library until finally published in 1632. This first edition in English, titled The True History of the Conquest of Mexico…Written in the Year 1568, was published in 1800. $1,000.

Item 85 is a work that sounds like it would still be useful today:  The Universal Directory for Taking Alive and Destroying Rats, and all other Kinds of Four-Footed and Winged Vermin… This is a third edition from 1786 by Robert Smith, self-described as "Late Rat-Catcther [sic] to the Princess Amelia." Based on the date and London imprint, this must be the Princess Amelia who was daughter of King George II. Born in 1711, this Amelia died the year this edition was published at the age of 75. She never married, though she was once mentioned as potential wife for the future Prussian King Frederick the Great. His father said no, and Amelia may have suffered a broken heart. At least she didn't suffer from rats. $475.

Item 59 is a long-ago look at linguistics:  Remains of Japhet:  Being Historical Enquiries into the Affinity and Origin of the European Languages. James Parsons' treatise was published in 1767. It was once believed that different languages had descended from the sons of Noah, with the precursor to European languages arising from his son Japheth. $450.

For almost as long as there have been books, there has been somebody trying to stop you from reading them. The Catholic Church particularly went into the banned book business in the 16th century, after the Reformation. It began publishing lists of books that could not be read without dispensation. Item 19 is one of those Index Librorum Prohibitorum, this the first list published during the papacy of Innocent XI (1681). Then, as now, getting on a banned books list was the best way to get your book read. $1,250.