From Popular Culture to Esoterica and More from Brian Cassidy, Bookseller 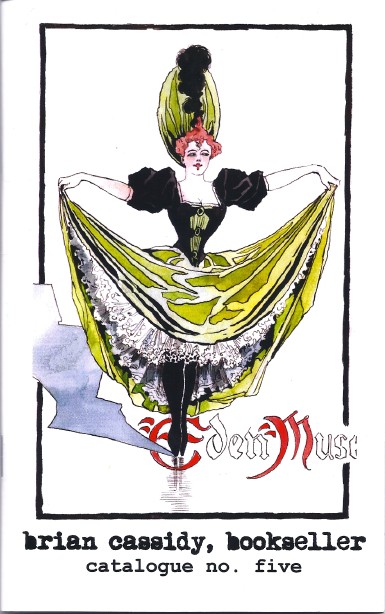 Brian Cassidy, Bookseller, recently published catalogue no. five. Cassidy offers a collection of eclectic works mainly from the 20th century. Specialties are described as, "popular culture, esoterica, modern and contemporary literature, poetry, the avante-garde, little magazines and small press, the Mimeo Revolution, The Beats, the New York School, as well as manuscripts, literary ephemera, Americana, and vernacular."  That should cover most of the material in this catalogue, much of which might also be described as representative of the counterculture. You might also, from the selection of topics, pick out "Americana," though, in Cassidy's case, that means Beat poets, "hippies " and such rather than Washington and Lincoln. This is a good look at American culture, though perhaps on the fringes, during the lifetime of those of us who are not all that young any more.

Item 25 offers an odd combination of artists two generations apart, though perhaps their appeal was similar to their respective generations. It is a spoken word EP record, released in 1992. The title is The "Priest" They Called Him. The words come from Beat poet and writer William S. Burroughs, 78 years old at the time. Burroughs was noted for giving spoken word performances. He is accompanied on guitar by Kurt Cobain, grunge rock pioneer, 53 year his junior. This oddity never made it to a Nirvana's greatest hits compilation. The recording is on only one side of the vinyl disc; the other side having Burroughs' and Cobain's signatures etched into the record (Cobain's intentionally misspelled). The much older Burroughs outlived Cobain, for all the wrong reasons. Priced at $475.

Item 97 is the only separately published piece by a man well known for other things. It is Wingless on Luna:  The 25th Wings Club General Harold R. Harris 'Sight' Lecture, given on May 20, 1988. This is a mostly technical discussion of space flight issues by a man who knew them well - astronaut and first man on the moon Neil Armstrong. It contains an inscription from Armstrong, which Cassidy notes is uncommon as he stopped filling autograph requests in the early 1990s. The piece itself is also quite scarce. $7,500.

Item 70 is a copy of Gerard Malanga's Cristinas World Im(media)cy Poemworks, published in 1970. Malanga is a poet, photographer, and filmmaker who worked with Andy Warhol in the 1960s. This book of poems comes with a long inscription from the author. He notes that it was written near Chadds Ford, Pennsylvania, home to painter Andrew Wyeth. This partly explains the book's title, similar to that of Wyeth's most famous painting, though he left the "h" out of Christina. Malanga writes that Cristina was intimate with the Wyeth children, and "Cristina is very much her own person - singular, heady, beautiful. She turns 24 this month." I am a bit perplexed by this one. Christina Olson, the subject of Wyeth's painting, was unable to walk, and consequently crawled through the fields surrounding her Maine home, explaining the painting. However, she would have been 77 years old at the time of Malanga's letter had she not died a few years earlier. Perhaps there was another Cristina associated with Wyeth, or he is simply referring to the painting, then 22 not 24 years old.  $375.