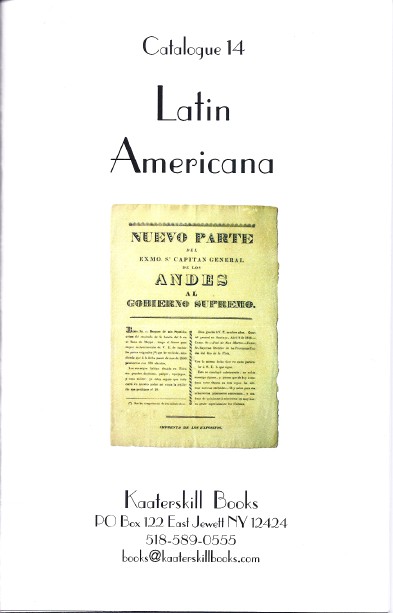 Kaaterskill Books recently published their Catalogue 14 entitled Latin America. Naturally, this includes a selection of books and ephemeral printings relating to the lands from Mexico to Chile. Anything pertaining to these lands is fair game for this catalogue, but we find a great number of works that pertain specifically to the revolutions which overthrew Spanish rule in the early 19th century. The rebellions initially began to appear around 1810, when conquering Napoleon threw the government of Spain into disarray. By the time Napoleon was pushed back, the residents of Latin America were determined not to let the Spanish reassert their authority in the American colonies. Rebellions grew until, by the 1820s, the Spanish were virtually removed from the Western Hemisphere. Here, now, are some of the items Kaaterskill Books is offering.

Item 26 is the first English edition of the founding account of Spanish Mexico:  The Despatches of Hernando Cortes, the Conqueror of Mexico, addressed to the Emperor Charles V. Cortes was a competent writer, but he never wrote a book about his conquest. His account is limited to five letters he wrote back to the King, three of which were translated for the first time into English for this title published in 1843 (one of the other five letters is lost). Cortes provides much valuable information about the Aztec Empire and its conquest, though his description is at least to some extent embellished by Cortes' desire to look good in the King's eyes. Priced at $150.

Item 4 presents an account of one of the earliest attempts at liberation in Spanish America:  The History of Don Francisco de Miranda's attempt to effect a Revolution in South America, in a series of letters. By a Gentleman who was an Officer under that General… The "gentleman" was James Briggs. Francisco de Miranda was an important figure in Venezuelan history. Born to a wealthy family, he traveled to the United States during the 1780s, meeting such luminaries as Washington and Jefferson. Perhaps they inspired him. He moved on to England where he advocated independence for Spain's American colonies. He was not exactly a democrat, advocating a huge empire with hereditary rulers, that would range all the way from the southern tip of South America to what is today the United States' Southwest. Nevertheless, Miranda next turned his attention to France where he fought for liberty. Naturally, as that revolution turned to terror, Miranda was swept up and imprisoned, but managed to avoid execution long enough to survive Robespierre. He later returned to England, and then to the United States, where he attempted to put together a filibustering expedition. It is that period which is described in this book. A few years later, Spain overrun by the French, Venezuela effectively achieved independence, but as the Spanish regained authority, Miranda's once allies turned him over to Spain. He spent the final four years of his life in a Spanish prison, where he died. Offered is a second edition of Briggs' work published in 1809. $100.

Item 91 is the second and conclusive report of General Jose de San Martin after the Battle of Maipu. It was the deciding battle for Chilean independence, a rout of the Spanish that enabled San Martin to quickly liberate Peru as well. The prior year, the Spanish had defeated San Martin in battle, but not conclusively. He regrouped and planned, and on April 5, 1818, he met the Spanish again. This time the results were different. The Spanish suffered 2,000 dead, 3,000 captured as prisoners, and the permanent loss of Chile as a colony. This report was issued as a broadside. $2,000.

Item 29 concerns another filibustering operation, though not one intended to bring freedom to Latin America. William Walker dreamed of heading a state in Central America, one which would welcome likeminded Americans to its territory. In 1853, he attempted to seize northern Mexico, but was repulsed. Undaunted, he brought a small army to Nicaragua, and this time, for a while, succeeded. Inserting himself in local political disputes, he made enough allies to seize power and name himself President in 1856. He then repealed the ban on slavery, hoping to gather immigrants and support from the American South sufficient to remain in power. He was unsuccessful. A coalition of forces from Central America forced him out. Walker returned to the United Sates, but made another attempt the following year. This time, he was arrested by the American Navy. This proved to be a controversial act, as Walker had many supporters, particularly in the South. President Buchanan, always supportive of the South and slavery, had the naval commander who arrested Walker, Hiram Paulding, relieved of duty. Item 29 is a defense of Paulding by Wisconsin Republican Senator James R. Doolittle:  Justification of Commodore Paulding's Arrest of Walker and his Command at Punta Gorda…Delivered…January 21st, 1858. Paulding would later be placed in charge of building up the fleet for the Civil War by President Lincoln. Doolittle would serve two terms in the senate and be a strong Lincoln supporter. And, Walker would make yet another attempt to take over Nicaragua in 1860, be captured by the British in Honduras, turned over to Honduran authorities, who executed him. $200.