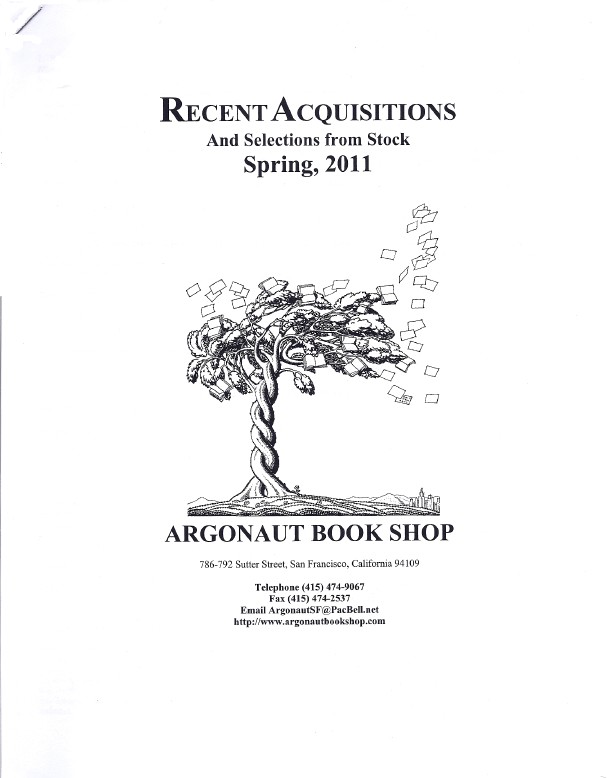 The Argonaut Book Shop of San Francisco issued a catalogue of Recent Acquisitions and Selections from Stock, Spring, 2011. There is no stated limitation to the type of material offered, but we can say that the concentration is heavily in western material, particularly California. And, within California, San Francisco and the gold fields are very well represented. You will find many books concerning the Gold Rush and the overland and sea journeys that brought fortune-seekers to this beautiful land. Fortunately, many travelers kept diaries of their arduous journeys to California, and while most were not published immediately, many came out in the years and decades following, often long after the writers had long departed for the gold fields of the non-earthly world.

As noted, there are a few items not related to California or western America. There is a copy of the first American edition of the "authorized translation" of Trotsky's book about Lenin. It would be hard to figure a connection between this book and the West, other than that long after it was published, Trotsky spent his final years in exile south of the border in Mexico, where Stalin's agents assassinated him. There is a copy of Sir Edward Belcher's The Last of the Arctic Voyages, an 1855 account of an attempt to find the lost Arctic explorer Sir John Franklin, in a land with very little in common with California. There are also a few pieces of important literature and art to be found. Nonetheless, most items do take us to the American West in an earlier, very different time. Here are a few.

Item 69 is the reminiscences of a man who made several journeys through the open west in the middle of the 19th century. William L. Manley crossed the Plains, took a raft down the Green River, and served as a guide for others during the Gold Rush. That led to his most dramatic, and most unpleasant adventure, which serves as the basis for the title of this 1894 book:  Death Valley in '49. He helped to lead a group of gold seekers who wished to follow a map of a new route they had been given, along the base of an east-west mountain range that would provide water and sustenance. Of course, no such range exists. Instead, they traversed dry and barren land in Nevada, before finally reaching a mountain range, half starved and dying of thirst. They thought it was the Sierra Nevada, with their destination on the other side. Instead, on the other side was Death Valley. Now facing enormous danger, the travelers sent Manley and another out to find help or an exit, while they waited by a spring. Somehow, the two scouts did manage to travel 250 miles on foot to reach a settlement, brought back supplies, and took most of the others out alive. Priced at $1,250.

It wasn't only Americans who trekked to the gold fields of California to get rich. There were some who actually traveled east to get there. Item 7 is Gold Fleet for California:  Forty-Niners from Australia and New Zealand, by Charles Bateson, published in 1964. It makes sense. They were farther away, but they had a straight shot by sea, something Americans from the east lacked. Argonaut describes this title as "A detailed and accurate look at the seven thousand Australian and New Zealanders who traveled to the California Gold Rush." $45.