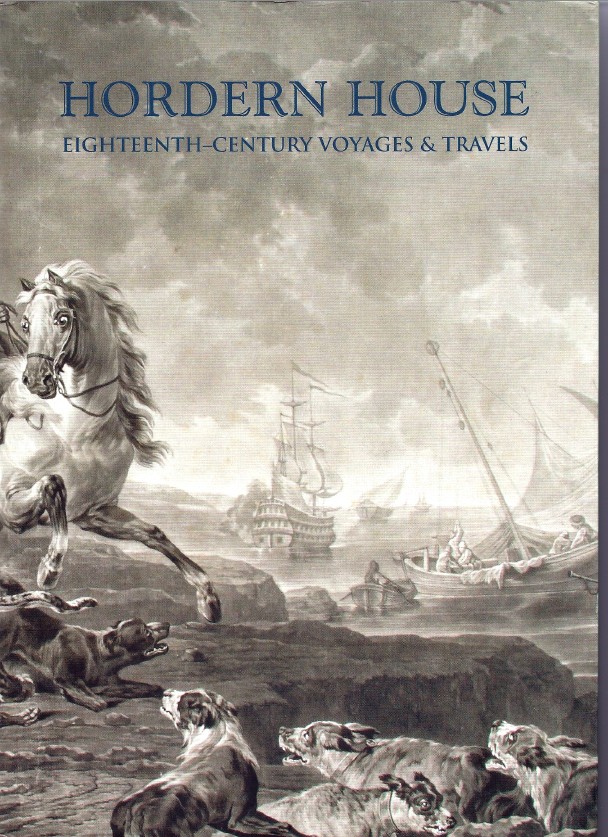 Hordern House has released an extensive catalogue of Eighteenth-Century Voyages & Travels. By the 18th century, European sea exploration was already over two centuries old, and most areas of the world were at least roughly understood. However, this was the period of great learning about the world, as explorers now brought back detailed scientific and social data, describing the natural history and peoples of far off lands. It was also the period in which final misunderstood details of the globe were filled in, including a complete look at Australia, the charting of the west coast of North America, and the debunking of the myth of a giant southern continent. It was the period when the Age of Discovery evolved to an age of understanding.

Hordern House's catalogue is divided into six sections:  Collections of Voyages, Early 18th Century Voyages, Voyages of Captain James Cook, Late 18th Century Voyages, The Pacific, and Imaginary Voyages. It is filled with important material, first and other early, mostly contemporary editions of accounts of important travels. Hordern House is located in Australia, so these voyages primarily reach the Pacific, but interest in these discoveries reaches far beyond that most isolated of continents. Most of the trips emanated from Europe, and the Pacific covers a wide swathe of territory, including the west coast of North and South America, Hawaii and numerous islands, and eastern Asia. Here are a few of the works of 18th century travel being offered by Hordern House.

Perhaps the greatest of all English explorers was James Cook, whose three journeys to the Pacific brought back a wealth of knowledge, particularly about Australia, the American Northwest, and the discovery of Hawaii. It was Cook who disproved the predominant theory that there was a massive southern continent. He disproved if by sailing deep into the territory it was thought to encompass. There are 116 items in this catalogue pertaining specifically to Cook and his discoveries. However, the British Captain made a totally different type of discovery that was of enormous importance to those who embarked on long sea journeys. At the time, the scourge of all sailors was scurvy, a disease caused by lack of vitamin C. It results in various debilitating symptoms, and eventually, death. Fresh fruits, particularly citrus, are the best preventatives, but fresh fruits could not be kept for long periods of time, and voyages those days took months if not years. Cook discovered that sauerkraut and malt did much to prevent scurvy among his men. These may not be as good as lemons and limes, but unlike the latter, it was one of the few pickled foods that lasted long periods of time while retaining some of their vitamin C content. Cook prepared a paper on his findings that was read to the Royal Society by Sir John Pringle, as Cook was off on his third journey by the time the presentation was made. Item 29 is the very rare first printing of Cook's findings, A Discourse upon some Late Improvements in the Health of Mariners, published in 1776. Item 29. Priced at AU $64,000 (Australian dollars, or roughly $68,442 in U.S. dollars).

Alexander Dalrymple was the first hydrographer (chart maker) for the Royal Navy, an expert in geography and navigation. However, he made one major mistake, and suffered one major disappointment, and these came together to produce this rare, vitriolic piece:  A Letter from Mr. Dalrymple to Dr. Hawkesworth, occasioned by Some groundless and illiberal Imputations in his Account of the late Voyages to the South, published in 1773. Dalrymple's major mistake was his belief in the existence of a large southern continent. He was the theory's primary proponent. His major disappointment was not being placed in command of the expeditions that were given to Cook. Dalrymple wanted to be elevated to Captain, the Navy declined, Dalrymple turned down the command, which then went to Cook. Hawkesworth compiled the official account of Cook's first journey, Cook being too busy with preparations for his second trip to prepare it himself. This account implied that there was no southern continent, a claim which enraged Dalrymple. Hawkesworth would later respond that the account was based on Cook's observations, not his own. While Dalrymple's diatribe was directed at Hawkesworth, his resentment was likely really intended more for Cook, who won the job he had wanted. A few years later, Cook would return from his second voyage with the final proof needed to debunk Dalrymple's massive southern continent theory. Item 95. AU $132,500 (US $141,747).