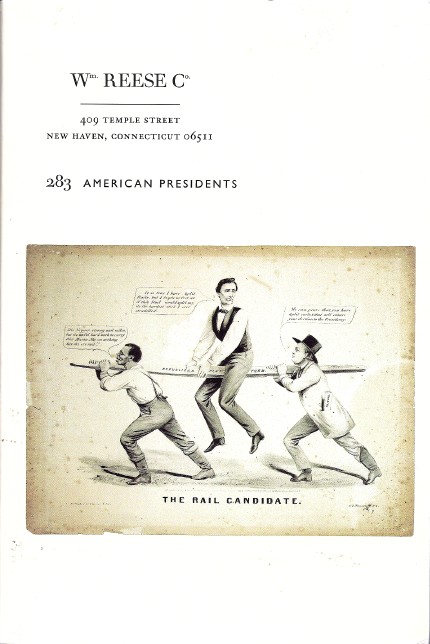 The William Reese Company has issued their 283rd catalogue, and it is a fascinating one for those focused on American politics. The title is American Presidents, and there is material pertaining to most of those illustrious, and not so illustrious individuals, from George Washington all the way to Lyndon Johnson. There is material on election campaigns, important presidential decisions, more routine matters, even personal correspondence, including before, during, and after their years in the nation's highest office. Some personal correspondence is with family members, others with friends, colleagues, or simply constituents. The material is presented in presidential chronological order, with the heaviest concentration relating to the first three presidents, but those who collect our more obscure leaders will find their share of items related to the Harrisons, Tylers, Fillmores, Hardings, and others rarely found on top ten lists of our greatest presidents. Here are a few.

Following the chronological sequencing, the first item is the oldest piece related to the first President. It's in French:  Memoire Contenant le Precis des Faits… compiled by Jacob Moreau and published in 1756 (the rare quarto first edition). This book describes an incident that set off the French and Indian War. British forces under George Washington intercepted French ones under de Jummonville in the back country of the Ohio River valley. The nature of Jummonville's expedition remains in question. The French, and this book, claim Jummonville was approaching Washington on a peaceful, diplomatic mission. Washington believed it was a spying mission. A battle ensued, and Jummonville was killed, possibly during battle, or perhaps after he was captured (and supposedly by an Indian ally). Whatever actually happened that day, the French believed Washington was a murderer. French forces later surrounded Washington and his men and they were forced to surrender. Washington's journal and instructions were seized, sent to France, and printed in this book (after being translated to French). The irony of all this is a few decades later, Washington would be fighting the British and the French would be his ally. Priced at $12,500.

From early in the first President's career we go to the late years of the second President. It ties the American founders to the second generation that would replace them in power by the 1820s. Item 23 includes a copy of a Discourse, Delivered at Plymouth, December 22, 1820, in Commemoration of the First Settlement of New-England, inscribed by author Daniel Webster to Ward Boylston, a cousin of John Adams. The oration was given by Webster, one of the giants of the age of great senators, at the celebration of the 200th anniversary of the Pilgrims' landing. It was an emotional speech, and contained some of Webster's political views, including his opposition to the spread of slavery, recently enshrined in the Missouri Compromise. Included with the pamphlet is a letter by the then 85-year-old former President John Adams, dated December 23, 1821, lauding Webster and his opposition to slavery. There is irony here too, as Webster, long a beloved figure in New England, would see his neighbors turn against him three decades later when he approved of the Compromise of 1850, which allowed for slavery to be instituted in territories where it had been banned by the Missouri Compromise. Still, the 1820 Webster had a profound impact on Adams who wrote, "If there be an American who can read it without tears, I am not that American." $62,500.