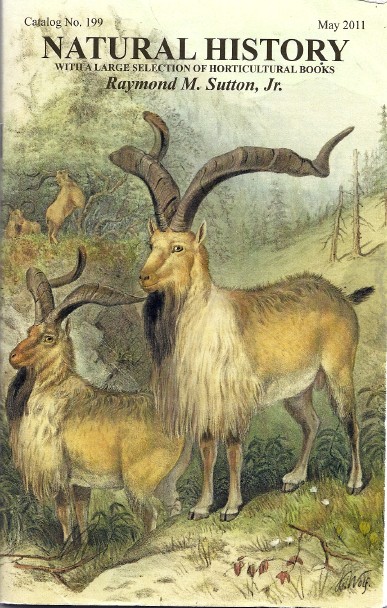 Raymond M. Sutton, Jr., has just released his Catalog No. 199. Natural History. With a Large Selection of Horticultural Books. Actually, the over 400 items in this catalogue have been neatly divided into various classifications:  Fine & Illustrated Works; Botany including Orchids & Cryptogams; Horticulture; Birds; Fishes & Marine Biology; Insects & Other Invertebrates; Mammals, Reptiles & Other Zoology; Geology & Paleontology; and History, Travel & General Biology. The items presented run the gamut from well-known, major scientific works, to tightly woven niches like a particular species, or plant or animal type as found in a particular state or even around a specific community. There truly is something for everyone who collects in the natural history field. Here are some examples.

Lewis and Clark are the most famous explorers to cross the North American continent all the way to the Pacific, but they were not the first. That honor belongs to Canadian Alexander Mackenzie, the first to make it all the way from east to west north of Mexico. His account is entitled Voyages from Montreal, on the River St. Laurence, through the Continent of North America, to the Frozen and Pacific Oceans:  in the Years 1789 and 1793. His explorations were undertaken on behalf of the Northwest Company, seeking to compete in the fur trade against the larger and more established Hudson's Bay Company. On his first journey, he followed the river which now bears his name attempting to reach the Pacific. Instead, he ended up along the Arctic (frozen) Ocean. Undaunted, Mackenzie set out again four years later, following a route that took him along various rivers as well as overland, finally reaching the Bella Coola, which drains into the Pacific from British Columbia. Item 31 is the 1802 first American edition of his account. Priced at $1,000.

Louis Agassiz was one of the great scientists of the 19th century, though the years have diminished and tarnished his reputation. Born in Switzerland in 1807, he studied first fishes and then glaciers. He later expanded to paleontology and other pursuits involving natural history. In the 1840s he came to America and became a professor at Harvard. It was from there he published Contributions to the Natural History of the United States of America, four volumes published 1857-62. It was Darwin's publication of his theory of evolution that would start Agassiz's reputation on a decline. He was perhaps the last major scientist to categorically reject evolution, holding to a creationist theory that held that various species were all created separately. This belief would also lead him to conclude that various human races were created separately, and, as one might expect from a white man, that the Bible (Adam and Eve) was an account of white people, and other races were inferior. In recent years, some edifices named for him have had their names changed as a result of his more repugnant views. Nonetheless, Agassiz was honored in his time, and his friend, poet Henry Wadsworth Longfellow, wrote a piece in honor of his 50th birthday. Item 3 is Longfellow's personal copy of this work, signed twice by the poet. $1,200.

Speaking of Darwin, item 142 is a book by another Darwin, Erasmus. It is the first Dublin edition (1800) of Phytologia:  or the Philosophy of Agriculture and Gardening. It provides an early description of photosynthesis along with much practical advice on gardening. Erasmus Darwin was a physician and scientist who studied natural history and wrote poetry on the subject. This Darwin also developed a theory of evolution, although he believed that organisms somehow had the power to evolve themselves. It would be left to the other Darwin, his grandson Charles, to come up with natural selection as the modus operandi of evolution. $600.

Obtaining printed copies of John James Audubon's illustrations of American birds can be costly. A copy of the folio edition of his Birds of America sold at Sotheby's last December for over $11 million, the highest price ever paid for a printed book at auction. This price is out of reach for most of us. However, Sutton has an alternative that will provide you with the same illustrations. It is The Original Water-color Paintings by John James Audubon for the Birds of America. This is also a folio presentation, including 431 color drawings in two volumes. This edition was published in 1966 and comes at the far more affordable price of $70.