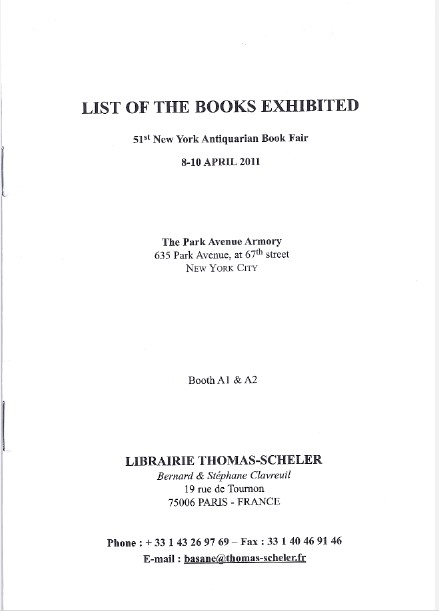 Librairie Thomas Scheler, the Parisian bookselling firm of Bernard and Stephane Clavreuil, printed a List of Books Exhibited at the recent New York Antiquarian Book Fair. The collection includes some major European works, including those of European Americana, particularly suitable for a fair in New York. This is all first tier material appropriate for the best collections. These are some samples.

Item 25 provides one of the earliest looks at what was the Canadian West in the 17th century, or "Upper Canada." In 1623, Gabriel Sagard-Theodat came to America as a French missionary. He spent a year working among the Huron Indians before returning to France. Living conditions weren't easy in the wilderness. His book is a primary authority on that once great tribe, most of which disappeared from disease as the territory was settled by Europeans. It includes information on the natural history of the Great Lakes area, as well as a description of Indian customs and the first printed Huron dictionary. Sagard's book is unusual among early ones as he was a member of the Recollets, whereas most early accounts came from the Jesuits. The first Recollet mission only lasted from 1615-29 before they were forced out, not to return until 1670. The title is Le Grande Voyage du Pays des Hurons… and it was published in 1632. Priced at $30,000.

There were no Europeans in America when this book was written, or even when it was finally printed almost two millennia later. Item 2 is the first printing of Aristotle's Problemata, and one of the earliest printings of any of the Greek philosopher's works, circa 1473. The book contains Aristotle's thoughts on many scientific subjects, such as medicine, meteorology, botany, mathematics, and wine. It is presented in the form of questions and answers. It was translated by Theodorus Gaza, a 15th century Greek scholar who moved to Italy and translated ancient texts into Latin for the Pope. $85,000.

The most famous French book ever written about America would have to be De la Democratie en Amerique, in English "Democracy in America," by Alexis de Tocqueville. De Toqueville was sent by the French government to America in 1831 to study the nation's prison system. However, de Tocqueville did far more. After studying prisons in the more developed coastal states of the East, he traveled west, visiting the frontier states of Tennessee, Kentucky, and Ohio, and to the South to visit Louisiana and Alabama. After that he traveled up the Mississippi, reaching the Great Lakes and Canada. His observations of what he found in America, particularly its democratic institutions, impressed de Tocqueville quite favorably. Offered is a first edition of both volumes, published in 1835 and 1840. Item 29. $28,000.

Item 3 is Les trios livres de la Chrysopee, a work on alchemy by the 15th-16th century Italian scholar Giovanni Augurello. This is the first French edition from 1549 of a work first published in Venice in 1515. This is an alchemical poem on making gold. The book was dedicated to Pope Leo X. I cannot vouch for this, but it is said that when Augurello approached Pope Leo for a reward for his work, the Pope gave him his empty purse, saying that since Augurello could make gold, what he really needed was an empty purse to put it in. $16,500.