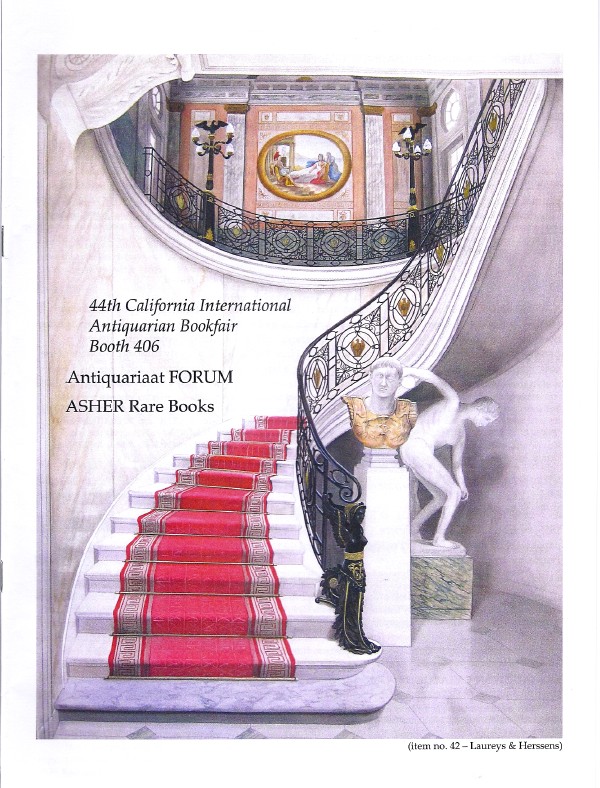 The Antiquariaat Forum and Asher Rare Books recently published a catalogue for the 44th California International Antiquarian Bookfair. The fair may be over but the books are timeless. For those who are wondering what type of books a dealer from Holland would display for an American audience, this catalogue provides an answer. It is a mix of Dutch, English, and other language books one might expect would appeal to an American audience. The subjects are varied, including much in the way of science and travels, topics that generally have universal appeal. Here are some samples of the books that made the trip to the New World.

The voyage of HMS Beagle to the waters around South America remains one of the most important scientific expeditions ever. The reason is that its naturalist, one Charles Darwin, took his observations of similarities and differences among animal species in separated but nearby locations and came up with a theory to explain it. However, that theory was not released until several decades later. Darwin did write about his observations in one of the volumes of the official report, though he ruminated on what they meant for a couple of decades. Three years before even that report, the first account of the expedition was printed in the pages of the Journal of the Royal Geographical Society of London in 1836. The article by John Barrow is titled Sketch of the Surveying Voyages of His Majesty's Ships Adventure and Beagle, 1825-1836. Those ships had embarked on two separate expeditions, with Darwin participating only in the second. Darwin's name is mentioned a few times in the article, though obviously not for what he has become known. At one point Barrow gives Darwin's explanation for the direction of the motion from an earthquake's shock wave. Item 23 are the pages (disbound) from this article and a second one in the same issue regarding the "Himmaleh Mounttains." Priced at $2,000.

Here is a work about another journey to South American waters that was a lot less pleasant:  A voyage to the South Seas, in the years 1740-1. It pertains to one of the ships on George Anson's privateering mission. All but one of Anson's six ships did not make it to the journey's end, and the ship here described was one of the five that did not, the Wager. When the Wager went down, the crew broke into two groups, neither of which had an easy time getting back. The authors of this book, John Bulkeley and John Cummins, managed to make their way back through the Straits of Magellan in a long boat and eventually to Rio. Along the way they had to deal with food shortages and Indians who were not always helpful. Item 13. $4,000.

As long as we are on difficult journeys, item 85 is an account of three of them:  Verhael van de eerste schip-vaert der Hallandsche ende Zeeusche… by Gerrit de Veer, published in 1648.  It is an account of three Dutch voyages in the late 16th century that attempted to find a Northeast Passage over Russia to the Orient. The noted explorer William Barentsz participated in all three (he died on the third trip). Van de Veer traveled on the last two, basing his account on his personal experiences and diary for those volumes, and Barentsz' notes for the first. Naturally, the travelers suffered their share of hardships in the cold, as none of these voyages succeeded in reaching their ultimate goal. Each time the ships eventually were frozen in. Nevertheless, they did bring back much information about these frozen outposts of the world. De Veer was the first to report a phenomenon known as the "Novaya Zemlya effect" after the island where they wintered over. The sun arose one day from the Arctic night two weeks ahead of schedule. The explanation is that under certain atmospheric conditions, light can be bent as it is in a mirage, allowing the sun to appear above the horizon though it is actually below that line. $5,500.

Item 7 is a book of Hebrew fables by Rabbi Barachia Nikdani (or Berechiah ben Natronai, ha-Nakdan, or any number of other spellings). Parabolae Vulpium was published in Prague in 1661, but Nikdani lived around the late 12th to early 13th century, probably in France, maybe for a while in England. He was evidently a scholar who wrote tales to reinforce biblical messages. Some were borrowed from earlier fables, notably Aesop, while others were evidently new ones he created. The protagonist of most of these tales is the fox (the book's title translates to "Parables of the Fox") though other animals also appear. $13,000.