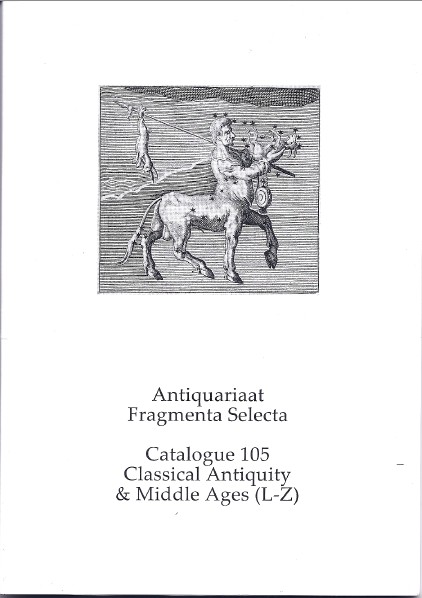 Antiquariaat Fragmenta Selecta has followed their 104th catalogue with Catalogue 105 Classical Antiquity & Middle Ages (L-Z). The previous catalogue contained similar material but from the front half of the alphabet. Once again, they are offering over 1,000 items pertaining to ancient Greece and Rome, plus the Byzantine Empire and Middle Ages. However, Greece and Rome dominate the listings. There are not many expensive books, most items being suitable for research and reading. We will describe some titles in English, but Greek, Latin, and other European languages are represented in this collection. Now, here are a few of those items that take us far, far back in time.

Item 84 takes us back to The Age of Pericles. A History of the Politics and Arts of Greece from the Persian to the Peloponnesian War. This 1875, two-volume title by W.W. Lloyd looks at the height of the city-state of Athens, and with it, ancient Greece. Pericles led Athens in the mid-fifth century B.C. Pericles emerged as the more democratic alternative of potential leaders, one who brought ordinary citizens into what had been a democracy of the privileged. Along with the promotion of greater democracy and the extension of more benefits to poorer citizens, Pericles was a great supporter of the arts and the architectural wonders of ancient Greece. It was Pericles who built the Parthenon and other surviving structures on the Acropolis. He also held together the Athenian empire, tributary states that were allied with and provided financial and other support to Athens. Pericles found himself the leader of numerous wars. He was not a dynamic, offensive strategist such as Alexander the Great. He was more cautious and defensive minded, preserving more than expanding his empire. He understood that Athens' major strength was its navy, and focused on conducting naval attacks, avoiding combat on land wherever possible. In the final years of his life, Athens would go to war with Sparta, a war that would ultimately lead to Athens' defeat and the end of its golden age. However, Pericles was long gone by the time the war turned decidedly bad for Athens. Priced at €68 (euros, or about $98 in U.S. currency).

Not all ancient figures were leaders in politics or the military, though it certainly helped to have friends in power. Item 708 is Moral Essays. With an English Translation by J.W. Basore. This is a three-volume set from 1970-79 of the moral views of Seneca. Seneca was a Roman philosopher who lived in the first century A.D. Seneca had lots of time to philosophize and write, as he was often in exile. However, he was called back to Rome to be the tutor of young Nero by his mother. His mother had married Emperor Claudius and convinced the latter to adopt Nero, thereby placing him in line to be the Emperor's successor. Ultimately, Nero's rule would be good for neither his mother nor Seneca. Nero killed his ambitious mother and forced Seneca to commit suicide. Nero claimed Seneca was involved in a plot to murder him, three years prior to Nero himself committing suicide to avoid execution. It was tough being a powerful figure in ancient Rome. Nonetheless, Seneca has left us with the ideals of his thoughts. €35 (US $50).

Next we turn to a man from the post-Roman period, where the balance of power in the world shifted east. Maximus the Confessor lived in the seventh century. He started out as a government official, but for whatever reason abandoned that field to enter a monastery. He became an important figure in Church circles, an author of many works. For a full accounting of Maximus' writings, item 171 is An annotated date-list of the works of Maximus the Confessor, by P. Sherwood, published in 1952. While Maximus wrote on varied subjects, he is most remembered for his involvement in what is known as the Monothelite controversy (or heresy). The issue was whether Christ, having human and divine natures, also had human and divine will. Today, such a difference would probably lead to theological debate. Back then, being on the wrong side could cost you your life, or at least, your tongue and your right hand. The Church now, and for many centuries, has adhered to the position of dual, though compatible wills. So did Maximus the Confessor. Unfortunately, he came along at just the wrong time, when the Emperor in his hometown of Constantinople held the opposite view, and the Church was forced to bend to political realities. Maximus had his tongue removed so he could no longer speak, and his right hand chopped off so he couldn't write. He was sent into exile and died shortly thereafter. However, the Church soon redeemed him, and within a couple of decades, Maximus was named a saint. €16 (US $23).

The ancient world was always at war with itself. In this way, it is much like the modern world. Item 217 is J.D. Montagu's Battles of the Greek and Roman World. This 2000 book contains a chronological account of 667 battles to the year 31 B.C., taken from the historians of the ancient world. €50 (US $72).