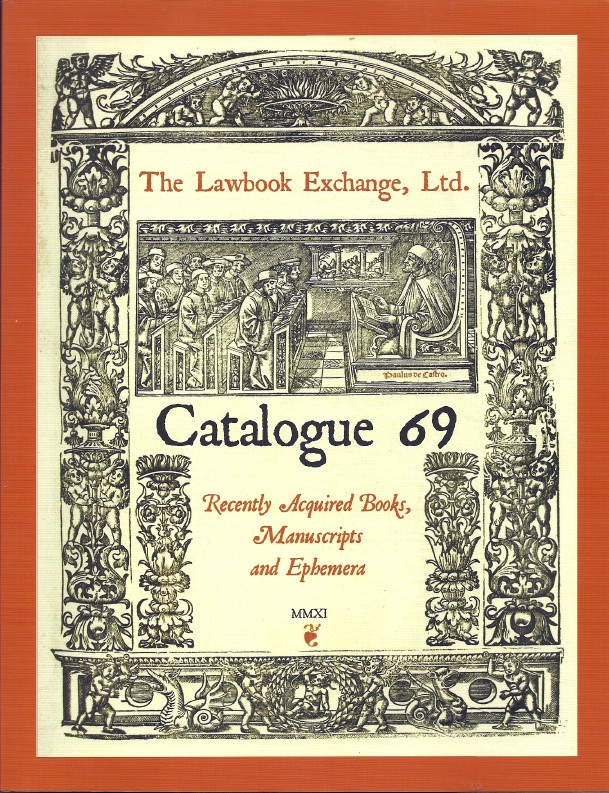 Law books from The Lawbook Exchange.

The Lawbook Exchange has issued Catalogue 69, Recently Acquired Books, Manuscripts and Ephemera. Anything pertaining to the law may be found here. Works range from early treatises on the law dating back to the 16th century, to statements of basic human rights held by American colonists objecting to British rule, to sensational murder trials, to basic texts meant for use by legal practitioners. If, as someone said a long time ago (John Adams?), we are a nation of laws, then this catalogue is a summary of the history of western nations. These are a few samples of what is offered.

Item 3 is one of the earliest enunciations of the sovereign rights of American colonists vis-à-vis their rulers in England. In 1721, Parliament's Board of Trade was seeking to revoke the charters of the New England colonies. The charge was the colonies were not doing enough to defend themselves from the French in Canada. This spirited defense was published by Jeremiah Dummer:  A Defence of the New England Charters. Dummer was an American who settled in London as representative for the colonies of Massachusetts and Connecticut. His argument for the colonists won the day and the charters were not revoked. Offered is a 1721 first edition of a book that would be reprinted in 1765 when Britain and her colonies again bumped heads, this time with far more serious consequences. Priced at $6,000.

The issue of colonial rights would arise again shortly after the French and Indian War when the British would again seek to make the colonists pay more for military needs. James Otis responded with The Rights of the British Colonies Asserted and Proved. It was a forerunner of arguments to be made later and enforced through revolution. Otis was responding to one of the first indignities, the sugar tax. Otis argues on the basis of the colonists' natural rights, including the right to a voice in Parliament. He has been credited with the quote "taxation without representation is tyranny." Item 7 is a first English edition, published in 1764 (same year as the first American). $3,500.

Item 99 is John W. Pitts' Eleven Numbers Against Legislation and Fees at the Bar, published in 1843. Pitts was an unhappy Georgian. He published the first six of his numbers in The Southern Reporter, but that publication refused to print any more. Pitts responded by publishing all 11 essays in this pamphlet. Pitts believed lawyers, who dominated legislatures, made laws unnecessarily complex, thereby forcing people to hire lawyers and pay their fees in order to exercise the rights created. Of course, we now know such charges to be entirely baseless. $850.