New Material from the Old West from Gene W. Baade 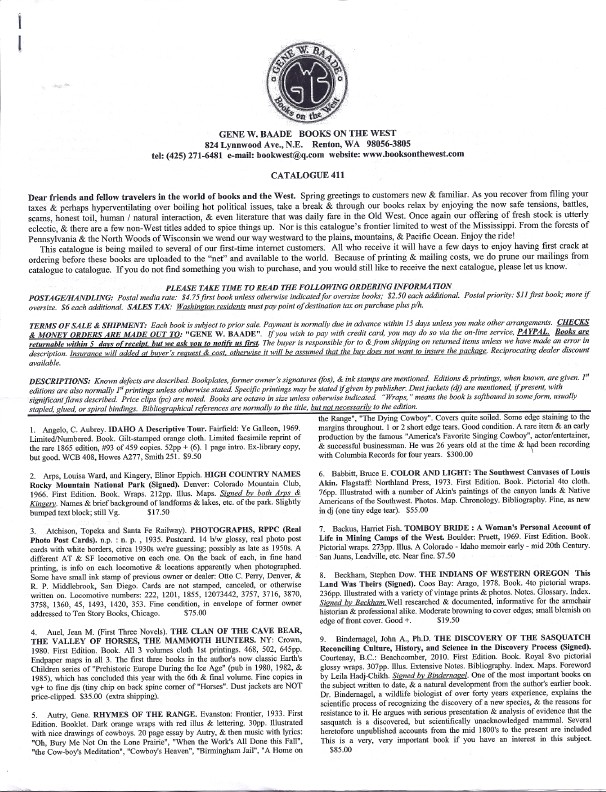 Gene W. Baade Books on the West just sent out their Catalogue 411, this time containing books on the American West and a few more. There are some items relating to the other side of the Mississippi. As Baade notes, most of the items pertain to "the now safe tensions, battles, scams, honest toil, human / natural interaction, & even literature that was daily fare in the Old West." It is better to read about the barrel of a gun then look down it. Here are a few samples from the newest stock being offered in this latest catalogue.

Item 117 is a scientific study of one of "the last ofs," The Medical History of Ishi, by Saxton Pope. Ishi was a member of the Yahi, a division of the Yana Indian tribe of California's Sacramento Valley. In the 19th century, the tribe, once several thousand strong, was virtually hunted down by the waves of settlers seeking their own fortunes and better lives. A massacre in 1865 left the tribe with only 30 members remaining, and at this point the survivors took to the hills, disappearing in the forests and rugged terrain, attempting to avoid annihilation. One by one they died off. By 1911, only Ishi, just six years old at the time of the massacre, was left. Finally, all alone, Ishi emerged. When he did, anthropologists took him to the University of California, both to study and protect him. He lived there until the man known as "the last of the wild Indians" died in 1916. This book about his medical history, including a postmortem examination, was published in 1920 and is quite scarce. The widow of the anthropologist most involved with Ishi published an account of Ishi's life some 40 years later that is more commonly found. Priced at $175.

Item 59 is a compilation of political speeches given by a most fascinating man, F. Augustus Heinze. Heinze was a New Yorker who went to the School of Mines at Columbia University and then west to find his fortune. He became one of the most noted "copper kings" in the mines of Butte, Montana. Competition was fierce, particularly with Amalgamated (now Anaconda). Heinze was known to bend the rules, hire lots of lawyers, maybe pay a few bribes, whatever was necessary to get ahead. Nonetheless, he was very popular with the miners. Heinze was able to garner political power, and friendly judges, by making himself popular with the workers. He instituted an eight-hour workday while his competitors demanded ten. When others cut wages, Heinze held his steady. Item 59 is Heinze's The Political Situation in Montana 1900-1902, privately printed in Butte in 1902. In it, he takes on Amalgamated and Standard Oil, enormously powerful New York trusts headed by Morgans and Rockefellers. Heinze was not afraid. He would later sell out his Butte mining interests when his opponents finally outmaneuvered him, become a financial operator in New York, return to the mines, and then be forced out of the company by its shareholders. He died in 1914 at the age of 44, likely from the affects of too much drinking. $200.

Not sure whether this one pertains to the land west of the Mississippi or east of the Mississippi. In a sense it is both. Item 23 is Riding the Wildman Plains:  The Letters and Diaries of Tom Cole 1923-1943, published in 1993. Cole was a cattleman, drover, horse breaker, buffalo and crocodile hunter. Yes, crocodile hunter, which explains the unexpected location of this tale. Cole was born in England, but migrated to Australia at the age of 17. Along with his exciting activities, Cole wrote several books about Australia and New Guinea. While this book covers the first 20 years that Cole wrote letters back to England after arriving in Australia, he continued to write almost until his death in 1995. This book covers the earlier years of his life in Australia's outback a couple of generations ago. It is a place that made the American West look like populous civilization. $27.50.

This was the American West in the days before expansion into the Louisiana Territory moved the boundary westward. Item 104 is the Gogebic Range Directory 1938. Some of you, I'll bet most, don't know where the Gogebic Range is. The answer is that this directory covers Gogebic and parts of surrounding counties. For those still unsure, Gogebic County is the westernmost county in Michigan, in the Upper Peninsula. The largest city is Ironwood, but it is hardly a metropolis. Not many people live there, despite the beautiful scenery around Lake Superior. Even with its limited population, a rather extensive directory was put together in 1938, and it includes much about its towns, businesses, residents, and government. It also contains numerous local ads. $200.