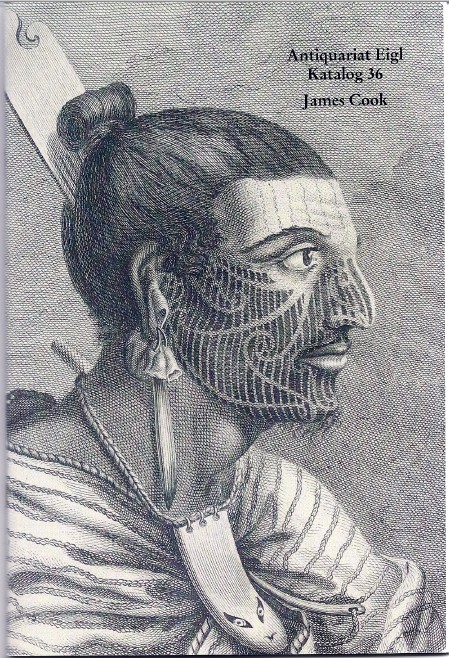 Katalog 36 from German bookseller Antiquariat Eigl has a very English-sounding name, James Cook. James Cook was, of course, the great English explorer from the 1770s. He took three journeys to the South Pacific, and sometimes beyond. His discoveries were numerous, his reputation impeccable. If his connection to Germany was limited, interest in that land in his discoveries and career was not. Many of the works by and about Cook were translated into German, and other works about him were written by German authors. Interest in the unknown is universal.

The first of Cook's voyages ran from 1768-1771. The main stated purpose was to observe the transit of Venus, which would allow for accurate measurement of the distance to the sun. However, the British were happy to have him poking around the area to see what competitor nations were up to. Cook completed the first circumnavigation of New Zealand and the first European exploration of the east coast of Australia. On his second journey, Cook penetrated the Antarctic circle and disproved the widely held belief that there was a massive southern continent. On his third trip, Cook was sent to the Pacific coast of America to try to find a northwest passage. He didn't, but Cook did chart much of the northwest coast of America and discovered Hawaii. The latter was his downfall, as on his return to those islands, Cook was killed by natives.

The perfect place to start a German Captain Cook catalogue is with item #1. This is a set of Cook's three voyages, but rather than being in their original English, these are the German translations. It were published in seven volumes from 1774-1788. The first three volumes contain Cook's account of the first voyage, as edited by John Hawkesworth.  Volumes 4 and 5 are the unofficial account of the second voyage by Georg Forster, who accompanied his father, naturalist Johann Reinhold Forster, on that journey. The final two volumes are the account of the third and final voyage, started by Cook but completed by Captain James King as Cook died on the way home. Priced at €27,000 (euros, or about $38,260 in U.S. currency).

Item 15 is An Historical Collection of the Several Voyages and Discoveries in the South Pacific Ocean, by Alexander Dalrymple, published in two volumes 1770-71. Dalrymple was an expert in geography as well as a chart-maker for the British, who thoroughly studied the various expeditions to the far corners of the world of the preceding centuries. He was expected to get command of the first journey that Cook led, bowing out in something of a fit of pique when the Royal Navy refused to raise him to the level of captain. The result was that command was given to not-yet-Captain Cook. Dalrymple was the leading proponent of the then widely held belief that there was a massive southern continent, far bigger than what we now know as "Antarctica." This collection of voyages not only was designed to provide an account of what had earlier been learned, but to bolster Dalrymple's theory of a southern continent. It was of the utmost irony that his replacement, Captain Cook, on his second journey would disprove Dalrymple's theory by sailing deeply into territory supposed to be part of this massive southern continent. €13,300 (US $18,885).