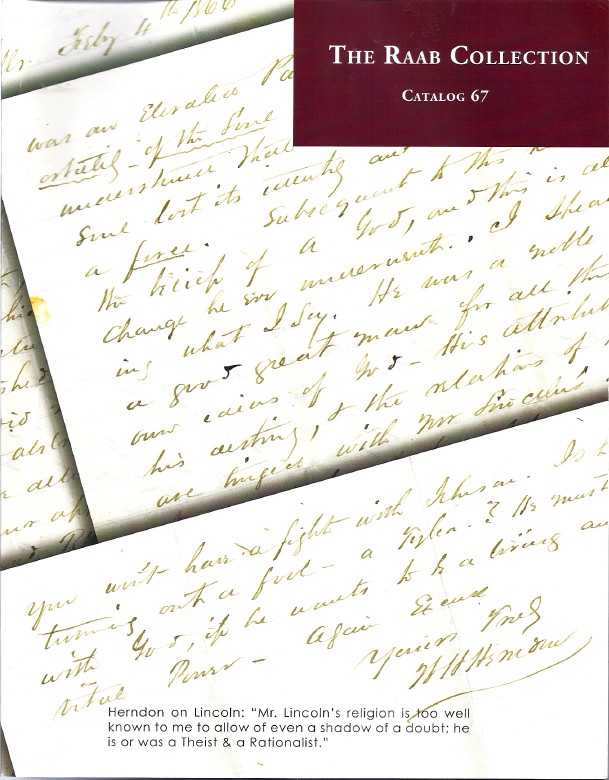 Part of William Herndon's letter on the cover of the Raab Collection catalogue.

The Raab Collection has just published their Catalog 67. It offers a selection of signed documents, mostly American, primarily of political or military significance. Many are very important, pertaining to notable historic events, sometimes presenting great insight into the thinking of some of history's major figures. Raab's catalogues are history lessons along with being a source of highly collectible material. Here are some of the items newly available.

Item 45 is a pre-American involvement in the war letter from President Franklin Roosevelt that reveals the deep belief he held that defeating Germany and the Axis powers was the paramount issue for humanity, even over humanitarian concerns. The letter was written to former Canadian envoy and personal friend James Cromwell, with whom Roosevelt had previously spoken about how to get humanitarian aid to residents of countries occupied by Germany. However, by the time of this letter, March 15, 1941, Roosevelt had managed to get lend-lease through Congress, which provided military aid to the British. This had been a challenge as there were both isolationists and German sympathizers active in America in the days before Pearl Harbor. Now that he had maneuvered America squarely to the side of England, Roosevelt did not want to send any mixed signals, and he feared sending aid to countries occupied by Germany might look like America was supporting that nation. Writes Roosevelt, "Through the enactment of the lease-lend bill the country has now definitely adopted the policy of giving aid to those who are defending themselves against the advance of the conquering forces. In spite of the sympathetic attitude of the American people toward the plight of the distressed and suffering peoples in the conquered territories, I question very much whether any action which might even appear to envisage assistance to the Axis powers would receive the support of the great bulk of American public opinion." Roosevelt would later be accused of turning away from those being sent to Germany's concentration camps by not bombing the rail lines, but here we see his single-minded focus on not doing anything that might interfere with the preeminent goal of defeating Germany, even before America was officially a participant in the war. Priced at $15,000.

You may remember one of the verses from the old spiritual Give Me that Old Time Religion went "It was good for old Abe Lincoln." It turns out that maybe it wasn't. Lincoln's religious beliefs were far more complicated than that simple verse implies. Item 26 is a letter from William Herndon, Lincoln's law partner from Illinois and probably his best friend. It was written to the Clerk of the House of Representatives on February 4, 1866, less than a year after Lincoln died. Herndon states, "Mr. Lincoln's religion is too well known to me to allow of even a shadow of a doubt; he is or was a Theist & a rationalist, denying all extraordinary - supernatural inspiration or revelation." Herndon goes on to say that Lincoln was at one time a pantheist, one who considers God and nature the same, but that "he rose to the belief of a God, and this is all the change he ever underwent." While it is unlikely one can ever know his precise thoughts, or how they evolved as he dealt with the horrors of war, it is clear that theology was not something Lincoln accepted based on someone else's say-so. It was an issue he wrestled with in his own mind, and it is likely he always had more questions than answers. $30,000.