Nautical (and a Few Railroad) Works from Columbia Trading Co. 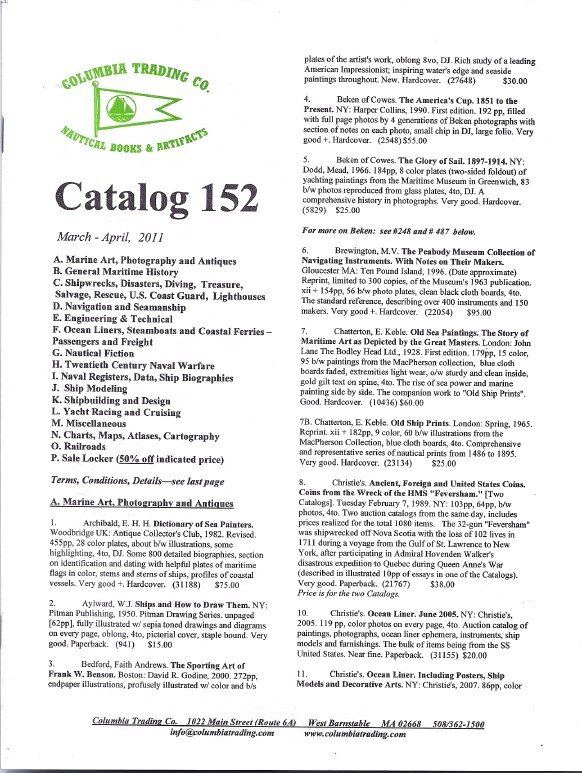 Nautical (and a few railroad) works.

The Columbia Trading Company has issued Catalog 152, a collection of nautical books and artifacts. Columbia Trading regularly offers a large selection, this time 628 items, ranging from antiquarian and collectible to more recent books meant more for reading and learning. The common theme is the sea. However, there is one exception this time - a section on railroads. The rails and the sea don't intersect, but occasionally they do meet, transportation of goods being what brings the two together. Here are a few nautical (and railroad) items from this catalogue.

Here is a company that in many ways shared the same fate as poor General Custer. Custer had a lot of successes in his life, but is remembered almost exclusively for his failure. The White Star Line was the premier ocean liner service of its day. It was formed in the middle of the 19th century and lasted until 1934, when it was taken over by Cunard. Nevertheless, it mainly is remembered for one ship, the Titanic. Item 221 is White Star, by Roy Anderson, published in 1964. It recounts the history of this most notable steamship company. Priced at $95.

Perhaps the sinking of the Titanic wasn't White Star's only mishap. Item 244 is Falling Star. Misadventures of White Star Line Ships. This book contains 256 pages and 125 photographs of setbacks suffered by the shipping line. The authors of this 1990 book are John P. Eaton and Charles A. Haas. $30.

So, in fairness to White Star, other lines had their share of mishaps too. Item 310 is Milton Watson's Disasters at Sea. Every Ocean Passenger Ship Catastrophe Since 1900… That would go up to around 1987, its publication date. Sounds like fun reading. $25.

We know Rockwell Kent mainly for his paintings and illustrations, and maybe for his left-of-center politics. He is not as well known for his writing, but he was quite skilled with the pen as well as the brush. Item 20 is his Salamina, published in 1935. For whatever reason, Kent decided to spend a winter in western Greenland, a place cold in summer, colder still and dark in winter. Most people lived in sod huts, tiny one-room houses crammed with large families. There was not a lot to do during the winter but sit around and wait. Conversation was not exactly free-flowing. What was there to talk about? Nevertheless, Kent found the people to be friendly and helpful. His book was named after his housekeeper/mistress, the widowed Salamina. This copy includes the first issue dust jacket, which displays the attractive Salamina emerging nude from the icy waters. It was soon replaced with a less risqué cover. $275.

Here is a particularly unpleasant story of a ship sinking:  Women and Children Last. The Loss of the Steamship Arctic, by A.C. Brown, published in 1961. The Arctic was the largest and most luxurious passenger ship when it went down off the coast of Newfoundland in 1854. It was the pride of the Collins Line, a major carrier at the time. It collided with a French ship that stayed sufficiently afloat to make it back to port. The title says it all, at least as far as the public was concerned. No women or children survived, though 61 men did, including some of the crew. Some of the men, including the Captain, survived by clinging to pieces of wreckage, but some of the crew escaped by taking the lifeboats. Among those who did not make it were the wife and two children of Collins Line manager Edward Collins. Item 181. $35.

As long as we're on the subject of wrecks, here is one of the railroad items:  Archive of Train Wreck Photographs. This picture book was published anonymously in the 1930s. It includes 66 photographs of railroad disasters with the wire service captions from International News Photos which accompanied them. These include locations, description of event, casualties, causes, and other pertinent data about these mostly American, but occasional Canadian, Mexican, and European disasters. Item 546. $175.

Item 506 is Mary L. Baker's Whales, Dolphins, and Porpoises of the World. One wants to add the word "Unite!" to the end of this title. Overthrow those who would take you for your blubber, oil, or make you perform at Sea World. Alas, this 1987 book is just a description of various species of these ocean mammals. $18.

John Paul Jones was America's first naval hero. His harassment of British ships during the Revolution was both an inspiration and help to America's revolutionary forces. After the war, Jones offered his services to Russia, and eventually made his way to France, where he died in 1792. So, why do we have an official congressional document regarding Jones from 1846? It seems some of his heirs were still fighting for forgone salary and prizes they believed Jones was owed. Item 128 is John Paul Jones - Heirs of. Rep No. 206, 29th Congress, 1st Session. Several of Jones' naval engagements are described, and supporting letters from Franklin and Jefferson are included. $75.