Fine Press Books and Much More from The Kelmscott Bookshop 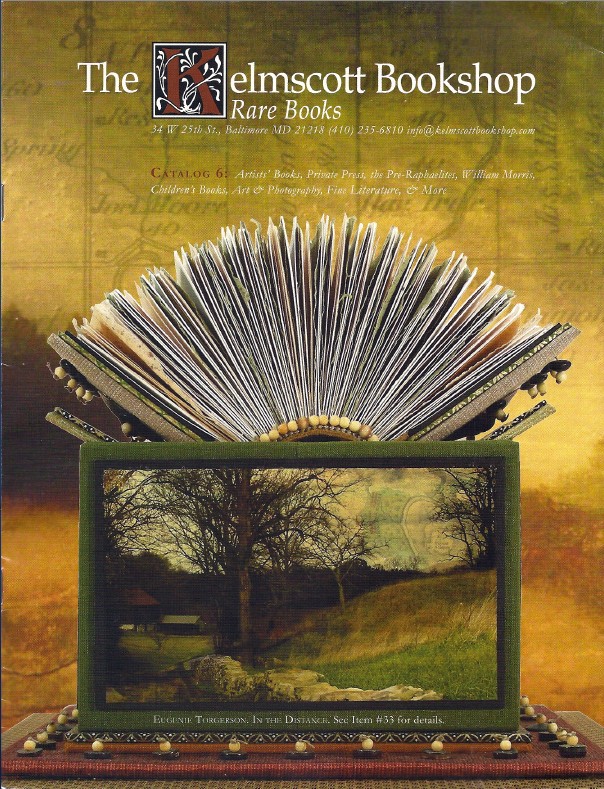 The sixth catalogue from The Kelmscott Bookshop.

The Kelmscott Bookshop Rare Books has issued their Catalog 6. The extended title describes it well:  Artists' Books, Private Press, the Pre-Raphaelites, William Morris, Children's Books, Art & Photography, Fine Literature, & More. Not much more we can say by means of description, so let's just take a look at a few items offered within.

William Morris was a notable artist and writer of the second half of the 19th century, along with being a devoted socialist. However, he may be more remembered as the founder of perhaps the best known of all private presses, the Kelmscott Press (after which this bookseller is named). He only went into fine press printing during the last five years of his life, but the books published by Kelmscott are all highly desirable. Item 55 is a pre-Kelmscott book by Morris, Signs of Change:  Seven Lectures Delivered on Various Occasions, published in 1888. The lectures were on Morris' favorite political issue - socialism. What is particularly interesting about this copy is Morris' inscription - "Georgie from WM." Morris married Jane Burden in 1859, and they remained married until he died in 1896, but for most of those years it was an unhappy marriage. Georgie was Georgiana Burne-Jones, wife of artist and business partner Edward Burne-Jones. Both were in unhappy marriages, so they provided each other with needed comfort and support. Priced at $9,700.

Item 90 is a bound run of The Loiterer, A Periodical Work. Brothers James and Henry Austen had published 60 issues of this periodical from 1789-90 while at Oxford. It consisted of whatever the Austen brothers felt like writing about at the time. After publication ceased, James had the issues bound into volumes and published a few of these. This, however, is the Dublin edition, which is believed to have been pirated. The Austen brothers are not that well remembered, but their younger sister, Jane Austen, is well known for her writing. While it has not been substantiated, Kelmscott notes that many believe an anonymous letter in issue #9, attributed to "Sophia Sentiment," was written by their then 13-year-old sister. The letter chides them for picking the "stupidest" subjects and asks for "sentimental stories about love and honor and all that." $4,000.

A.A. Milne will forever be associated with Winnie-the-Pooh and that series of children's books, but he wrote some serious works too. Item 105 is Milne's Peace With Honour:  An Enquiry into the War Convention, published in 1934. Milne had served in the First World War and came away thinking that war really wasn't a good idea. Offered is a 1935 fourth edition with a handwritten poem by Milne, more the whimsical Milne of his children's stories than the serious author of this war and peace tract. Writes Milne to his friend, playwright and poet John Drinkwater,

The road where I was born.

The bicycle I fell off,

The stockings that were torn.

Ah, little did I think then

That road would come to be

The home of two such famous men

Item 15 is Nikki Thomson's Collapse, published in 2007 by the Deconstructed Artichoke Press. I guess if you deconstruct an artichoke it collapses. It contains poems the author has described as being about "architecture and love gone bad." The deep-red paper, cover and tie-string of this accordion-style foldout book are meant to show heartbreak. This is number 11 of a limited edition of 20 copies. $250.

Item 21 is another accordion book, Party Dress. Artist Catherine Michaelis has created eight cutout dresses, even with the paper tabs to attach them to a paper doll (we don't recommend you actually cut them out). The text is about the artist's mother's pre-party rituals. Published in 25 copies in 2004 by May Day Press. $200.