Classical Antiquity and the Middle Ages from Antiquariaat Fragmenta Selecta 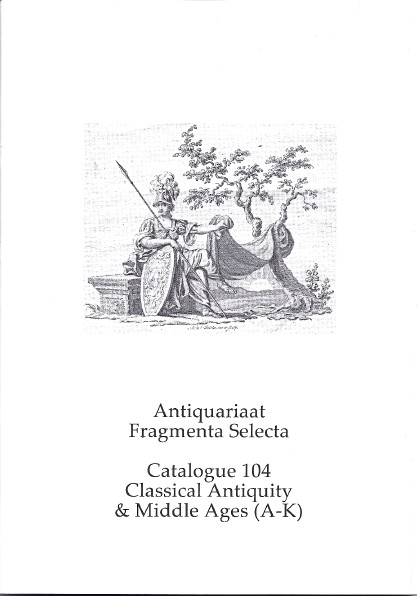 Classical antiquity and the Middle Ages.

Antiquariaat Fragmenta Selecta has issued their Catalogue 104. Classical Antiquity & Middle Ages (A-K). Fragmenta Selecta issues very large catalogues, over a thousand items in each, thus the need to break them down alphabetically. The remainder of the alphabet will be covered in a second catalogue in the near future. The Dutch bookseller focuses on items related to that long period from the beginning of ancient Greece to the dawn of the ages of enlightenment and discovery. Roughly, that would run from around 700 B.C. to 1500 A.D. Naturally, you won't find books printed in that era. These are books copied from ancient manuscripts, translated from ancient works, or books about those old times and the writing then produced. Most are useful for their information, rather than as prized collectibles, and are priced accordingly. They are written in many different European languages, though we will focus on texts that are in English. Those more comfortable with French, Dutch, German, Latin and other tongues will find plenty of items suitable to their needs in this catalogue as well.

In a catalogue starting with the letter "A," you can expect to find much on Aristotle. There are over 100 books pertaining to perhaps the most noted of Greek philosophers. You can learn about his views on logic, metaphysics, biology, friendship, passion, morality, education, politics, culture, body and soul, rhetoric and emotion. You would probably describe Aristotle as the quintessential Renaissance Man if he hadn't been born almost two millennia before the Renaissance. There is even a portrait of him, though I'm not sure how accurate that could be. Of course, Aristotle is just one figure from that period of 2,200 years. There are many more, some well known, others obscure. Here are just a few samples of the types of books to be found among the over 1,300 hundred items offered.

Item 281 is an account of the exploits of Aristotle's most successful student, Alexander the Great. Succeeding his assassinated father as King of Macedon, Alexander expanded the Greek empire all the way through Persia and into Central Asia and India. However, he succumbed to some sort of illness or other before ever returning home, and his expansive empire could not survive without him. Item 281 is a 200-year-old translation of one of the best sources on Alexander's campaigns, Arrian's history of the expedition of Alexander the Great and the conquest of Persia, published in 1812. Arrian was an ethnic Greek, Roman historian who lived some 400 years after Alexander. While this would have put him far past the lives of Alexander's contemporaries, Arrian had access to the works of those closer to those times, some of which are now lost. Arrian's account of Alexander's military actions are particularly well regarded for accuracy. This book is bound together with The expedition of Cyrus into Persia and the retreat of the Ten Thousand Greeks. Priced at €70 (euros, or about $97 U.S. dollars).

Next we will again go back to the fourth century B.C. for an oration against a piece of legislation in ancient Athens. The legislation is known as the law of Leptines, and it did away with exemptions from the tax to support festivals granted to certain privileged individuals. The purpose was evidently to spread the burden more evenly, though some, such as the orator Demosthenes, felt it was going back on promises. Item 720 spells out his objections:  The speech of Demosthenes against the law of Leptines, edited by J.E. Sandys in 1890. Demosthenes had to argue the case against a jury comprised of many poor people, not a favorable audience, so he points out that those with insufficient property are exempt from these obligations anyway, so they will not be harmed. It is unclear what the result was in terms of this law, and not much is known about Leptines, its promoter. It is known that Demosthenes perhaps orated a bit too much for his own good, including against the encroachments of the aforementioned Alexander the Great into Athens. He ultimately chose suicide rather than face the wrath of Alexander. €48 (US $67).

Speaking of suicide, item 1144 is From autothanasia to suicide. Self-killing in classical antiquity. Anton van Hooff looks at numerous instances of people taking their lives in ancient times to better understand the why as well as the how. While ancient Greece was probably 2,000 years ahead of its time, it was still not always a wise idea to get on the wrong side of a power struggle. One thing different about those times is suicide was not looked on so negatively, but rather, as an at times appropriate action. $72.

As we are often told, just as we have been for millennia, we are in end times; the apocalypse is coming. Item 375 is Richard Bauckham's look at apocalyptic predictions, not so much for what will happen to the world, but what will happen to individuals as a result, or to be more blunt, what happens to the dead. His book is The fate of the dead. Studies on the Jewish and Christian Apocalypses. The end is near. €95 (US $132).