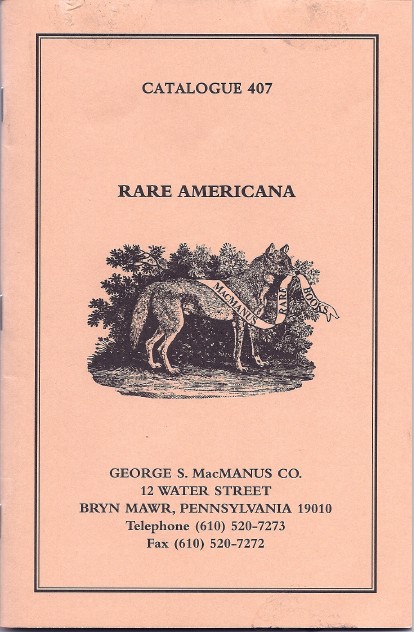 The George S. MacManus Company has issued their Catalogue 407 of Rare Americana. This is a selection filled with important items for collectors of Americana, whether from Colonial, Revolutionary or later times, or for travels, politics, natural history, or just about any subset of the field. This is a catalogue filled with essential pieces for major collections. And, while there are 201 items in this group, we suspect there will be more to come as the authors' names all begin with the letters A through D. Nonetheless, there is plenty to keep your attention from those four letters. Here are some examples.

Not everyone was enthralled with the rebellion that would lead to American independence, particularly back in England.  Item 14 is a sammelband containing 15 tracts from the revolutionary period, all printed in London, mostly critical of what the Americans were up to. The collection was put together by Francis Foliambe, a British MP and book collector. Two of the pamphlets come from the legendary lexicographer and wit Samuel Johnson. He found nothing humorous in the colonists rebellious ways. In 1775 he writes that the Americans should "…be subdued with the least injury possible to their persons and their possessions. When they are reduced to obedience, may that obedience be secured by stricter laws and stronger obligations." Thanks for the advice, Sam. Samuel Seabury, perhaps the most vocal proponent of British rule in the colonies, makes an appearance, as does Joseph Galloway, who competes with Seabury for that honor. One anonymous author claims that John Hancock was "one of the most notorious smugglers in North America" who encouraged the dumping of tea in Boston harbor not out of principle, but to protect his own investments. Priced at $35,000.

Item 49 is a broadside from the loyalist Boston printer John Howe, from June 26, 1775. It came a week after the Battle of Bunker Hill, a Pyrrhic British victory if ever there was one. Howe puts a spin on the outcome, exaggerating the American manpower advantage while stating, "This action has shown the bravery of the King's troops, who under every disadvantage, gained a compleat victory over three times their number, strongly posted, and covered by breastworks. But they fought for their King, their laws and constitution." The British technically won the battle with the aid vastly superior arms, but their "compleat" victory convinced the colonists that, despite the British advantage, they could hold their own, imbuing them with the confidence they would need to rebel for total independence. $25,000.

Item 110 is An Account of the Late Revolution in New England, by Nathaniel Byfield. You might think this referred to the famous American Revolution, but this account was published in 1689, almost a century earlier. Even then, New Englanders were an independent lot, and they were displeased with the imperious ways of their governor, Edmund Andros. After the rebellion which overthrew King James II in England, the colonists responded with one of their own against Andros, who had removed some of their charters, along with other affronts. Andros was captured, some say while attempting to escape dressed in women's clothing, and shipped back to England for trial. Naturally, he was immediately released without trial once he arrived England, and was later sent back to America to be governor Virginia and later Maryland. $8,500.