The American Southwest, Mexico, and Latin America from Almagre Books 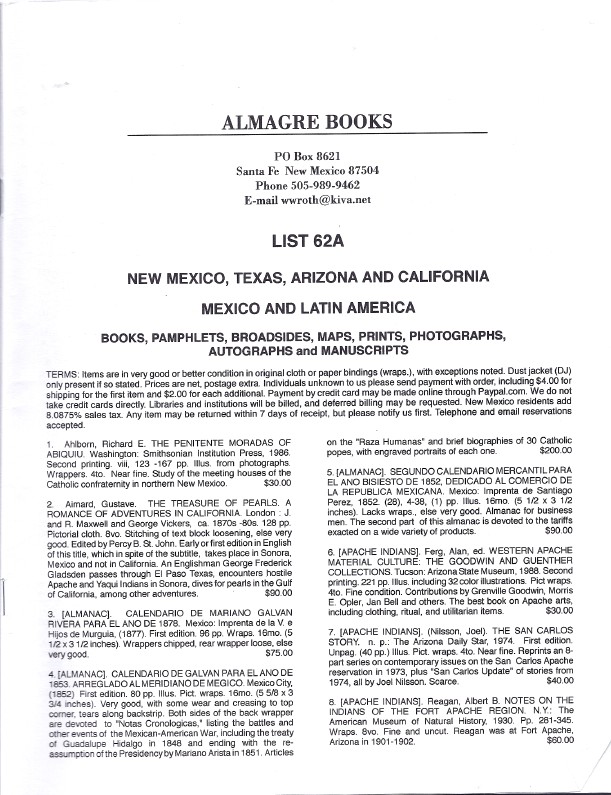 The American Southwest and Latin America from Almagre Books.

Almagre Books of Santa Fe has issued their List 62A, New Mexico, Texas, Arizona and California. Mexico and Latin America. Once upon a time, they could have called this just "Mexico and Latin America." Those states were all part of Mexico until Texas revolted in 1836, and the others were ceded to the United States with the conclusion of the Mexican War in 1848. There are items in this catalogue from both sides of that divide, with many pertaining to the era when these territories moved from one side of the border to the other. Offered is a large selection, 626 items in all. There are some cowboys and Indians, gunslingers and lawmen works here, but this is not a typical "Wild West" catalogue. There is much in the way of art and culture, Indians not linked to cowboys, political and military issues, mining, cattle, and exploration, plus an extensive collection of photographs, letters, and maps. There is much to be found pertaining to the American Southwest, and the lands lying even farther to the south.

Here is an account of the event that opened up the West to America, the Northwest immediately, the Southwest indirectly. Item 87 is Histoire de la Louisiane et de la Cession de Cette Colonie par la France aux Etats-Unis… This roughly translates to the history and cession of Louisiana by France to the United States. The author was Francois de Barbe-Marbois, and his account of what Americans know as the Louisiana Purchase was published in 1829. Barbe-Marbois was a French diplomat who participated in the early negotiations that led to the transfer of this large territory from France to the United States. His book not only provides insight into the negotiations leading up to the transfer, but much about the Louisiana Territory itself, including its history, customs, Indians, settlers, pirates, and even material about Texas, which was not part of Louisiana. Of note is that Barbe-Marbois states that the 110th meridian formed the western edge of the territory. The 110th meridian passes through Montana, Wyoming, Utah and Arizona, but Americans claimed the Louisiana Purchase included lands all the way to the Pacific. What the purchase clearly did not include was the states now considered the American Southwest, this land being south of the then border between Louisiana and Mexico. However, the purchase that led to America obtaining lands to the Pacific farther north eventually led to the doctrine of Manifest Destiny, and the capture of the Southwest from Mexico after a trumped up war. Priced at $1,250.

Item 550 is a Message from the President…Communicating…Information in Regard to Plans to Induce Immigration of Dissatisfied Citizens of the United States into Mexico, and Especially in Regard to the Plans of Dr. William M. Gwin and M.F. Maury, published in 1866. Those "dissatisfied citizens" were former Confederate soldiers and sympathizers looking to get out of America. William Gwin was a former California senator who favored the South, while Matthew Maury was a noted oceanographer and U.S. Navy Commander from Virginia who resigned his commission and became a Confederate diplomat during the Civil War. In 1864, French leader Napoleon III installed the Commander-in-Chief of the Austrian navy as Emperor Maximilian I of Mexico, taking advantage of America's preoccupation with other matters. Gwin sought approval from Napoleon III for a colony of Confederates in the Mexican border state of Sonora. While Napoleon III approved of the idea, Maximilian was hesitant, fearful that an American settlement in a Mexican border state could lead to a repeat of what happened in Texas. Maury's plan, however, met with the Emperor's approval. Maximilian knew and respected Maury from his days as a naval commander, and Maury planned a series of colonies further inland. Maximilian wanted to Europeanize Mexico anyway, and the plan for colonies consisting of former Confederates as well as European immigrants met with his liking. Several colonies were started, but in 1867, the Mexican people overthrew Maximilian, and they had little use for his colonies of Americans and Europeans. The settlements soon disappeared. $125.