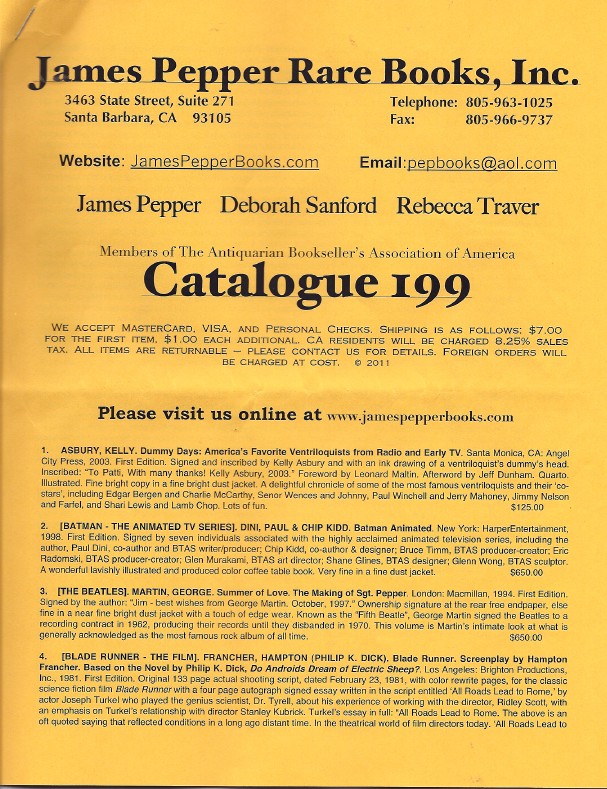 James Pepper Rare Books has released Catalogue 199 in their almost monthly series. The formula is similar, and obviously successful. They offer a mix of material related to film and theater, with literature, science fiction and detective mystery, and a smattering of other fields, such as sports. Here, now, is a look inside number 199.

Item 15 is a look at several of the stars of the 20th century by one of them - Eddie Cantor. Cantor was a comedian, but he was also a singer, songwriter, actor, dancer, and huge radio star of the 1930s and 1940s. Before that (and continuing into that era) his recordings were best sellers. He also starred in early television, but for whatever reason, his enormous popularity and fame ebbed quickly, and he is not as well remembered as are many of his contemporaries. Cantor's book is entitled As I Remember Them, published in 1963, and it has chapters on stars of his era such as W.C. Fields, Al Jolson, Greta Garbo, Groucho Marx, Judy Garland and Will Rogers. However, the one with which this copy is most connected is Cantor's longtime friend Jack Benny. Benny was the master of the pregnant pause, along with the exasperated look and legendary stinginess, all an act. Writing about Benny, Cantor says, "I told him once I'd give him the shirt off my back. 'And do you know what I'd do for you Eddie?' he said. 'I'd wash it, iron it, and charge you only thirty-five cents!'" Cantor has inscribed this copy to Benny, "One of the all-time greats of show business." Priced at $1,250.

Item 130 is Show Business, by Thyra Samter Winslow. Winslow made her way from small-town Arkansas to the big cities via her writing skills. Her name is obscure as most of what she wrote was for magazines, articles long since forgotten, though she did write some books (including compilations of her magazine articles) and at least one screenplay. Her writing about show business evidently brought her in contact with some its biggest names as this copy is inscribed to Florenz Ziegfield of Ziegfield Follies fame and his wife Billie Burke, best remembered as Glinda the Good Witch from the Wizard of Oz. To continue the name-dropping, the book later made its way to the library of Marx Brother Harpo and his wife Susan, an actress and one-time member of Ziegfield's review. $650.

Here's the ultimate "for dummies" book:  Dummy Days:  America's Favorite Ventriloquists from Radio and Early TV, by Kelly Asbury, published in 2003. Probably the most famous ventriloquist/dummy pairing was Edgar Bergen and Charlie McCarthy. Along with the sharp-tongued Charlie, Bergen had other dummies, such as dimwitted Mortimer Snerd. What is something of a mystery is that Bergen and Charlie rose to fame on radio, where the dummy can't be seen, nor the ventriloquist's skills appreciated. The book also looks at other famed pairings, including Paul Winchell and Jerry Mahoney, Shari Lewis and Lamb Chop, and Senor Wences and Johnny. Not to mention Pedro, the head in a box. S'all right? S'all right. S'okay? S'okay. Item 1. $125.

Item 113 is a book about a book. It is Lost on the Titanic - The Story of the Great Omar - A Jeweled Binding of the Rubaiyat of Omar Khayyan bound by Sangorski & Sutcliffe in 1911 That Went Down with the Titanic. Rob Shepherd's account of this tragedy (admittedly, the tragedy of this loss pales in comparison with the human life lost on the Titanic) was published in 2002. Sangorski and Sutcliffe were known for fine, at times extravagant bindings, and this one certainly qualified as taking the art to the extreme. It took two years to make the binding, which contained over 1,000 precious and semi-precious stones. Unfortunately, it sank so soon after being created that there was only one known old black and white photograph of it. However, Shepherd discovered archives about it, which he used to recreate its appearance in color. $375.

Item 19 is an original Herald Pamphlet for London After Midnight, the 1927 silent film starring Lon Chaney. It features Chaney as a vampire in this murder/horror film, though it is impossible to go into great detail. The film is "lost," perhaps the most famous of all the old silent movies for which no copies are known to still exist. $850.

James Pepper Rare Books may be reached at 805-963-1025 or pepbooks@aol.com. Their website is www.jamespepperbooks.com.