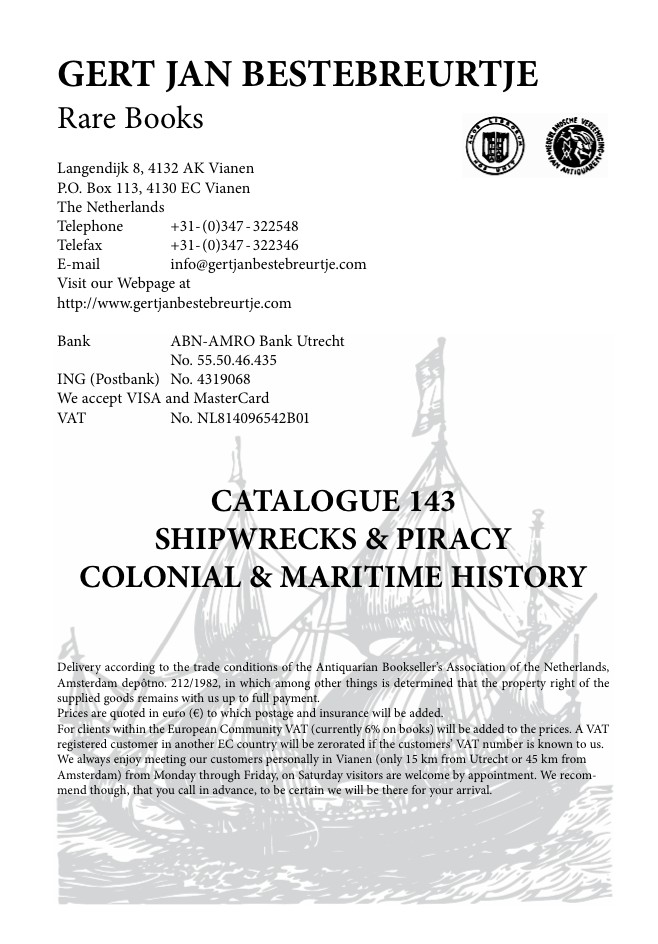 Gert Jan Bestebreurtje Rare Books has issued a new catalogue entitled Shipwrecks & Piracy, Colonial & Maritime History. Bestebreurtje is located in the Netherlands, and the Dutch were leaders in maritime trade, exploration, and colonial development a couple of centuries and longer ago. Not that this catalogue is limited to works by or about Dutch travelers. It includes many books from various countries, and translations of works from one language to another. The catalogue itself is primarily written in English, so it is readily accessible to those who do not speak Dutch. Here is a look inside at some of the works, which range from antiquarian, collectible editions to more recent, inexpensive items intended more for learning than collecting.

Item 65 is the tale of a harrowing voyage in 1808, Shipwreck and Death of Lord Royston, and other persons of distinction; who were passengers from Liebau for Carlscrona, in The Agatha… The Agatha was sailing the icy waters north of the European continent when it began leaking profusely. For a couple of days the crew and passengers pumped and bailed while searching for a harbor where they could land, avoiding the dangerous sea ice. Finally, they made a run for it, but were unsuccessful. The ship sank deeper, and many of the passengers and crew made a run for the lifeboats. Lord Royston and a few others made it to one boat, but were promptly washed away. So were many of those on board. When a lifeboat reached the ship, it found Captain Koop and a few others clinging to the bow. They were rescued, but the Captain had to report all of the others were lost. However, he was not quite right. Several passengers had taken shelter in the ship's round-house, unknown to the Captain. They took turns coming out on deck for brief periods of time to signal to shore that they were still alive. Finally, after several harrowing rescue attempts, they were saved. Priced at €195 (euros, or approximately $265 U.S. dollars).

Item 375 is the Memoir of Sir Henry Keppel, Admiral of the Fleet, by Algernon West, published in 1905 (the year after Keppel died). Keppel served the British navy through most of the 19th century, excepting the early and later parts. As such, there were not a lot of wars in which to be engaged, though he did participate in the Crimean War and the Second Opium War with China. Keppel's long run of service also found him engaged in the interception of slave ships and pirates. €45 (US $61).

Item 497 is Het kultuurstelsel. Zes voorlezingen, six lectures by Nicolaas Pierson published in 1868 on the Cultivation System imposed on the Dutch East Indies from 1830 until the 1870s. The Dutch were losing money on their major colonies at the time this system was imposed. It required farmers to set aside 20% of their land to produce crops that the Dutch could sell in the open market. It brought in bundles of cash to the Dutch and made the colonies quite profitable. The shortcoming was that it placed enormous burdens on the poor Indonesian farmers, who, already struggling to produce enough food to eat were now required to set aside 20% of their production for the benefit of their colonial rulers. Author Pierson was an economist and member of the Liberal Party, which opposed and brought about an end to the hated system. Pierson would later be elected Dutch Prime Minister at the turn of the century. €75 (US $102).

Item 606 is Dutch emigration to North America, 1624-1860, by B.H. Wabeke, published by the Netherlands Information Bureau in 1944. This look at Dutch nationals who helped settle America is bound together with a 1947 memorial souvenir of the centennial celebration conducted in that most Dutch of American towns, Holland, Michigan. €35 (US $47).