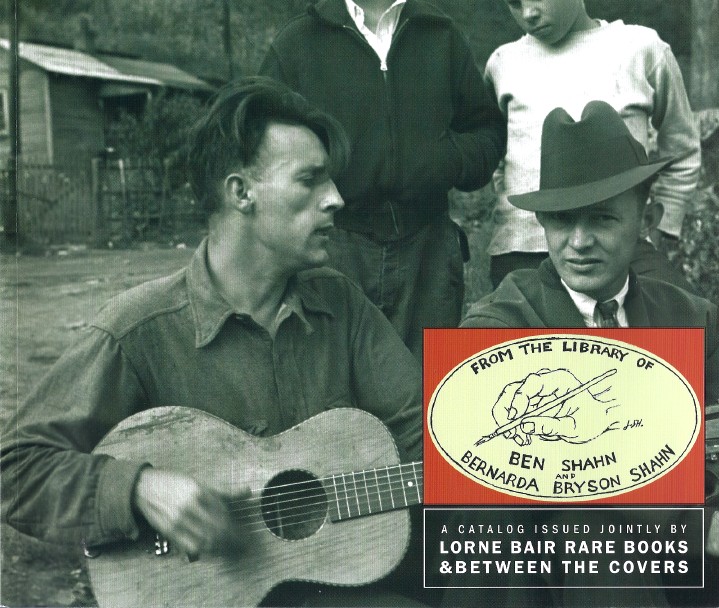 From the library of Ben and Bernarda Shahn.

Lorne Bair Rare Books, together with Between the Covers, has issued a catalogue of 101 Books from the Library of Ben and Bernarda Bryson Shahn. Ben Shahn was one of America's most notable artists of the 20th century. His reputation as a painter was born of the Great Depression. After dabbling in modern art at a younger age, he developed a style of social realism. His paintings were meant to portray the struggles of ordinary people, workers, and others on the lower rungs of the societal ladder. His politics, not surprisingly to the left, directed his art.

During the height of the Depression, Shahn worked for the Farm Security Administration. The FSA was created to help poor farmers through these very difficult times, but as part of its work, perhaps from a publicity standpoint, it hired on a group of photographers to capture the plight of those in rural America. Shahn taught himself photography, thereby becoming both an accomplished painter and photographer.

One of his coworkers at FSA was Bernarda Bryson. She was also a painter, and later became his second wife. Though never gaining the reputation of her husband, she was quite accomplished in her own right. Ben Shahn died in 1969, but Bernarda lived all the way until 2004, when she died at the age of 101. She continued to paint and exhibit well into her nineties.

All of the books in this catalogue come from the Shahns' library. Most were received during their years together, though there are many from the years of Bernarda's widowhood, that being such a long time. A special bookplate has been designed by their son, which is included with each of these books. Here are a few of them.

One of the greatest of Depression-era photographers, and the Shahns' colleague at FSA, was Walker Evans. His photographs of Alabama sharecroppers in the 1930s is perhaps the classic photographic depiction of rural, Depression poverty. Ben Shahn had met Evans a few years earlier when both were developing their interest in connecting art to social concerns. They remained close friends and collaborators for the rest of Shahn's life. Item 27 is Evans' American Photographs, published by the New York Museum of Modern Art in 1961. In contains an inscription from Walker to the Shahns. Priced at $12,500.

Item 28 offers a longer inscription from Evans to Shahn, though it is written in a copy of American Horse-Drawn Vehicles, by Jack D. Rittenhouse. Written on Nov. 22, 1968, Evans begins "Dear Old Dr. Ben," making light of both of their having honorary degrees, and notes how both were getting old. Evans also speaks of a planned visit, though Bair notes it's unclear whether that ever took place as Shahn, who died the following March, was already quite ill. $1,800.

Here is a book documenting the work of the FSA photographers:  Home Town. Photographs by Farm Security Photographers. This 1940 book was edited by Edwin Rosskam, with text by Sherwood Anderson. At least 17 of the photographs within were taken by Shahn. This was his personal copy, and does show signs of use (condition is good only). It was inscribed to Shahn by Rosskam. Item 1. $2,500.