Old and Rare Books about Books from Knuf Rare Books 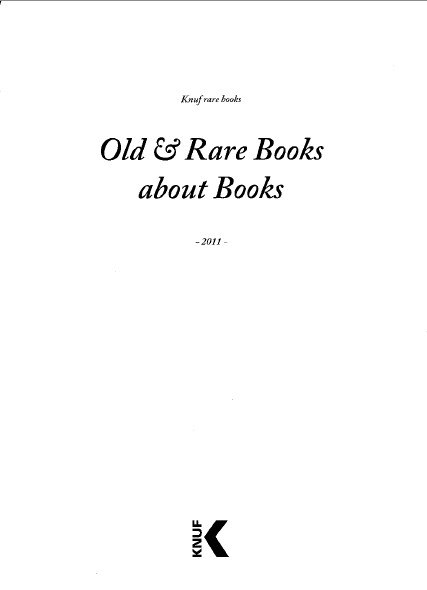 Old and rare books about books from Knuf Rare Books.

Knuf Rare Books has issued a catalogue of Old & Rare Books about Books. Knuf Rare Books is located in Vendome, France, so not surprisingly, most books are from France. However, the catalogue itself is in English, so it will provide no obstacles to American or British collectors. In it you will find all types of books about books, covering such topics as printing, binding, typography, libraries, and lists of books from booksellers, auction houses, even those of prohibited reading. This is a fascinating look at books from the pre-television and internet days when the medium had little competition as a source for information and entertainment. These are a few of the 101 items Knuf has described in this latest catalogue.

Item 31 is an important work in the history of French printing:  La Science pratique de l'Imprimerie contenant des Instructions tres faciles pour se perfectionner dans cet Art. Printed in 1723, Martin Dominique Fertel's first edition guide is the first French printing manual, and the only one published prior to the Revolution. Fertel ran a print shop in St. Omer during the first half of the 18th century, and did quite a bit of traveling around Europe. Unable to find a printing manual anywhere, he decided to produce his own. It covers composition, press correction, accentuated letters and punctuation, and press work. It is reported to be an excellent guide, though I'm not sure that the instructions for running a press are quite as easy to follow as the title claims. Priced at €4,500 (euros, or approximately US $6,131).

Item 64 is the Bibliotheque de Madame la Dauphine. No. 1, by Jacob Nicolas Moreau, published in 1770. The Dauphine, or Princess, was Marie Antoinette, just 15 years old but already the wife of the Dauphin, the future King Louis XVI. Marie Antoinette had recently arrived from Austria, specifically to marry the future French King and cement relations between the nations. It was now time to educate her in the history of France. This title lists the 166 books in the library that was prepared for her and includes an essay on the importance of studying the past. Moreau became her librarian as well as France's royal historiographer. He planned to produce a series books, but this No. 1 was the only one to make it to print. As for Marie Antoinette, she became an avid reader and bibliophile, but her French history lessons never made her very adept at French politics, and ultimately she had a most unfortunate run-in with a guillotine during the French Revolution. €800 (US $1,088).

Item 44 is Cum Regulis confectis per Patres a Tridentina Synodo Delectos, the index of prohibited books from 1593. This was a list of books Catholics were prohibited from reading without dispensation. There was little need for such lists for the Church's first millennium and one-half, but with the invention of printing, heretical thoughts could be mass-produced. Still, it took the Reformation to sufficiently upset the Church to the point where it began publishing such lists, the first to come in 1557. In time, the list would expand to other types of heresies, such as disputes within the Church or salacious materials. As might be expected of censured books, eventually their appearances on these lists only served to make them more popular, leading to an end to the indexes. €1,800 (US $2,448).