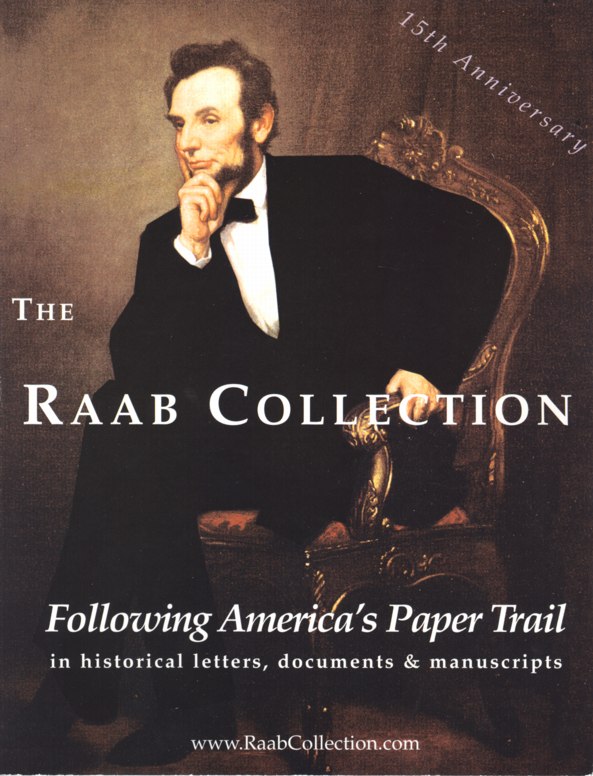 The Raab Collection (formerly Steven Raab Autographs), a dealer in primarily American historical autographs, has issued its 15th anniversary catalogue, "Following America's Paper Trail in historical letters, documents & manuscripts." This is not a typical autograph catalogue. It is a catalogue of signed historical documents of great importance.

There is Andrew Jackson's appointment which challenged the assumption that the President could not fire cabinet or other officials he appointed which required congressional approval. There is Lincoln ordering the blockade of the South which started the Civil War. Raab even offers Theodore Roosevelt's letter in which he coined, no borrowed, the expression "speak softly and carry a big stick." We will get to these in due course, but for this review, we will start a bit earlier. The catalogue is in chronological order, so we will follow the same.

In 1792, John Adams served as Vice-President of the United States, but also as President of the Senate. In that capacity, it was his job to collect the electoral vote for that year's election. George Washington, already recognizing the growing split that would lead to the two-party system, ran for re-election as a unifier. It worked this time, but other than Monroe's re-election in 1820, the country would never see such unity again. However, at the vice-presidential level, the divisions became more pronounced, and Adams had to hold off a challenge from George Clinton. This document is Adams acknowledgement as Senate President of receiving the votes from Connecticut, which supported his vice-presidential candidacy. Priced at $75,000.

As mentioned, the election of 1820 would be the only other when the nation was so united. It was the "Era of Good Feeling." In 1819, President James Monroe took a trip around the country, and was warmly received wherever he went. Returning to Washington, he wrote this letter to the Mayor and City Council. He speaks of finding "a people virtuous and intelligent, attached to their free institutions, and firmly resolved to support them..." With regard to the Native Americans, Monroe says, "To the conditions of the Indians I have always paid attention, and shall feel happy in giving effect, as far as I may be able, to the wise & salutary laws of Congress calculated to promote their civilization and happiness." In a particularly significant point, he states, "I have endeavored to examine with care the dependence and connection of various parts of our Union on each other, and have observed with great satisfaction the eminent advantages which they respectively derive from the intercourse existing between them." This speaks to the slave/non-slave state divisions which would eventually split the nation, but in the following year, the Missouri Compromise would put even this issue on hold.