Water in the American West from Marc Selvaggio 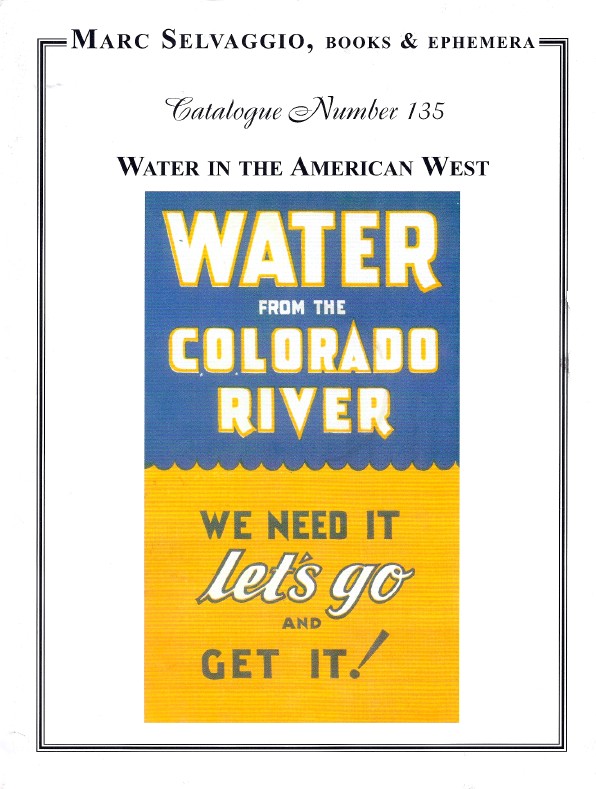 Water is the lifeblood of the West.

Marc Selvaggio, Books & Ephemera (or as he has restyled his name for this catalogue, Marc Selvaggio, Bibliohydrologist) has issued a catalogue on Water in the American West. National security, energy, the economy are all more important issues in much of the country, but the West lives or dies based on access to water. Most of it is naturally dry, too dry for the farming that enabled it to grow, too dry to meet the needs of its growing population without human intervention. For some reason, water issues seem to be in the background, of lesser concern than what is going on overseas. In time, a change will be forced upon us, and if we don't figure out ways to either increase the water supply, or better conserve what we have, the prosperity and growth the West has long enjoyed will come to a crashing halt.

The works in this catalogue generally explore the way water needs were handled in earlier times. Then, with needs not as great, and rivers not yet diverted, the answer was generally more and bigger dams and reservoirs. These allowed the West to grow from barren wasteland to a region both inhabited and farmed. We will now take a look back at some of yesterday's projects, ever mindful that yesterday's solutions will not likely meet tomorrow's needs, that new solutions will need to be found.

That brochure you see on the cover of this catalogue dates to the days when larger cities were making their claims on water resources in rural areas. It was published in 1931 by the Citizens Colorado River Water Committee out of Los Angeles. It encourages residents of the 15 cities in the Metropolitan Water District to back the project that would transport water from Boulder (now Hoover) Dam to the communities of southern California. As the brochure notes, "We need it. Let's go and get it!" Item 247. $20.

A similar, and highly controversial water project began in 1913 in Yosemite National Park. San Francisco, needing water to feed its growth, began construction on a dam in the Hetch Hetchy Valley. An earlier generation of environmentalists fought the project, but to no avail. The O'Shaughnessy Dam was built on the Tuolumne River, with water transported from the new reservoir to San Francisco via aqueduct. Item 133 is an account of its construction by the man for whom the dam is named, M.M. O'Shaughnessy (costs led people to say the M.M. stood for "More Money," rather than Michael Maurice). Obviously, O'Shaughnessy's book is pro-dam, and he dismissively refers to opponents as "nature lovers," though the idea of removing the dam has come up a few times in recent years. The book is entitled Hetch Hetchy:  Its Origin and History, published in 1934, and this copy is inscribed by O'Shaughnessy's daughter. $125.

Item 136 is a speech in the U.S. Senate by Senator Marcus A. Smith concerning the San Francisco water project. Smith was from Arizona, but he had once lived in San Francisco, and at the time (1913) served as Chairman of the Committee on Conservation of Natural Resources. Smith had evidently heard appeals from conservationists in his role, and his view on the project was quite clear. Speaking of "you lovers of nature," Senator Smith warns against, the "opposition born of a propaganda financed by venal, selfish interest which have persuaded so many good people, ignorant of every essential fact in this controversy, to petition you and me to preserve the beauty of a national park, forgetting or ignoring the wants and necessities of living men and women." Sounds like the fox may have been in charge of the conservation hen house. $25.

Item 144 is a broadside from Holman, Stanton & Co. of Sacramento circa 1885:  The Irrigation Problem Solved. The Giant Horse-Power Pump. The pump may have been giant, but the horsepower was not. It came in one, two and three horsepower models. Much more would not have been practical, as when they said "horse-power," they meant it quite literally. You attached horses to the pump, who would pull the thing around to pump water. A 100 or 200 horsepower pump would have been chaos. Holman, Stanton was promoting their pump to the fruit and wine industry, claiming, "It is well known that a few feet under the surface of these broad plains lies an exhaustless supply of water." If only that were true. $85.

Item 76 is a rather nondescript title that hides one of the largest projects ever proposed by man:  Western Water Development. A Summary of Water Resource Projects, Plans, and Studies Relating to the Western and Midwestern United States. This is a stapled report from the U.S. Senate, a 1966 revised edition following that of 1964. The mammoth project goes by the name of the North American Water and Power Alliance, or NAWAPA. The idea was to dam up most of the rivers that flow north to the Arctic Ocean in Alaska and northern Canada, and divert the water south. A series of dams would provide hydroelectric power to pump the water uphill where necessary, with some left over for commercial use. There would be a series of canals, pipelines, and reservoirs, and in particular, the Rocky Mountain Trench, a valley running from Montana through Canada, to carry the water. From Montana, it would flow to the Colorado and other western rivers. When completed, it was claimed it would double the supply of water to the western states, with some left over to make the Colorado River flow through Mexico once again. The environmental damage such a project would create is hard to imagine, and the Canadians weren't too keen on the project, but it would have provided for a lot of water, not to mention jobs (and costs). Don't look for this project to be implemented any time soon. $85.