The Life & Times of George Washington from The Raab Collection 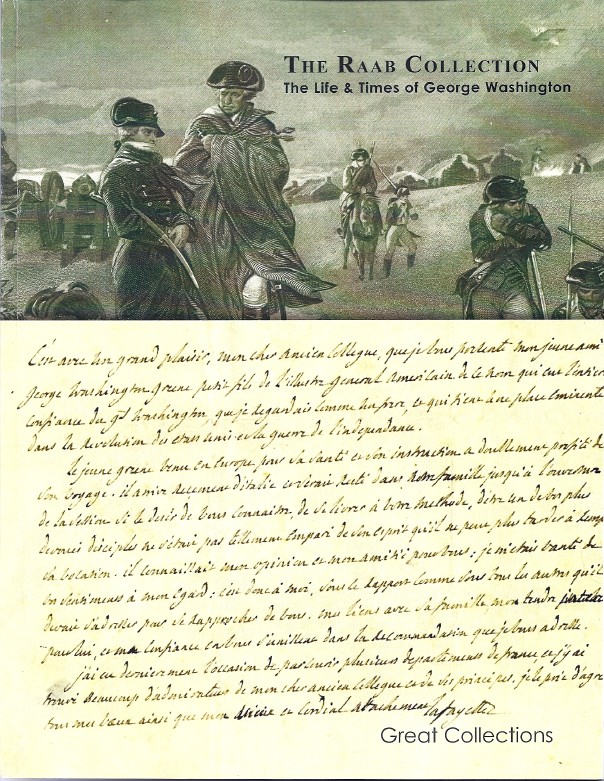 The Life and Times of George Washington from The Raab Collection.

In a Gallup poll conducted this past President's Day, Americans selected the "greatest" President of the United States. Reagan, Clinton and Kennedy all beat out George Washington. How soon we forget. The Raab Collection has not forgotten, and this month they have issued one of their "Great Collections," The Life & Times of George Washington. This catalogue is not just about Washington, but he dominated his times, and many of these items come from his hand.

Washington is almost something of a forgotten figure. Everyone knows his name, but it seems that few understand the magnitude of his contributions, or the mettle of the man. As a general, he won the Revolution for independence against the heaviest of odds. As the nation's first President, he took it through the treacherous waters of international intrigue while it forged its identity. These may be secondary to the legacy of freedom and democracy he gave to his country. He could have been King, ruler for life. Instead, he reluctantly served two terms as elected President, set the highest of moral standards, and willingly retired to his home when his years were finished. He wasn't perfect. He had slaves, though he was the only slaveholding president who freed them (after he died). Still, it was his values, and his true belief in serving his country, not just advancing his own interests, that set the standard for his nation. We may stray, but at least we have a solid foundation. George Washington. Here are a few items from this collection.

The Revolution effectively ended after Yorktown in 1781 when the British pulled out. However, it was not until 1783 that a treaty was finally signed. Then, Washington had lots of soldiers and no war. Today, we would maintain a large peacetime army, but early Americans were wary of a standing army, fearing it would take over the government.  So Washington was eager to send the soldiers on their way. On November 4, 1783, he was able to whip this letter off to Dr. John Cochrane, Director General (chief surgeon) of the Continental Army. With so many soldiers now discharged, "it appears to me no longer necessary to keep in service so many Officers of the Hospital Departmt…" The letter is signed by Washington. Item 34. Priced at $35,000.

Washington had many admirers, one of whom was a young Frenchman who came to America to join the American cause, later to return to France and serve the cause of freedom in his homeland for many years. That would, of course, be the Marquis de Lafayette. He would serve under Washington during the Revolution, as well as under another American general, Nathaniel Greene. After the war, Lafayette returned to France, and did not visit the States again until a quarter of a century after Washington died. In 1829, Lafayette was called on to write a letter of recommendation to a Belgian educator on behalf of General Greene's grandson, George Washington Greene. Lafayette is profuse in his compliments of young Greene, but in speaking of his namesake says, "General Washington was like a father to me." Item 20. $15,000.