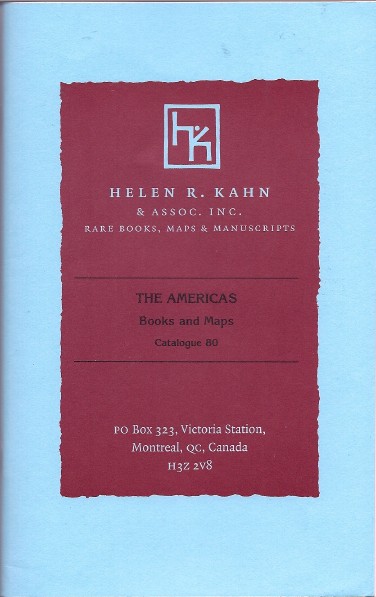 The Americas from Helen R. Kahn.

Helen R. Kahn and Associates has issued a catalogue, number 80 so far, devoted to The Americas. While all of the Americas are considered, the books mostly concern North America, with a few related to the West Indies and South America. As a Canadian bookseller, there are more titles in French than one might typically expect to see for a catalogue of the Americas, but most books were written in English. Titles are mostly quite old, with many emanating from the U.S. and Canada's colonial past. These are a few examples.

How much a few years can change things. Item 35 is A Sermon Preached before His Excellency Thomas Pownall… by Samuel Cooper, from 1759. Cooper extols the Massachusetts men who fought in Canada during the French and Indian War, and lauds British power and culture over that of its vanquished rival France. The clock would be running on Cooper's love of the British. In time he would become one of the great proponents of the American Revolution, and associate of Massachusetts patriots such as Hancock and the Adamses. Priced at $700.

Item 133 is a similarly ironic piece:  Four Dissertations, on the Reciprocal Advantages of a Perpetual Union between Great Britain and her American Colonies. Relations were already becoming strained at the time these pieces were written - 1766 - but few would have foreseen the break that would come a decade later at that time. These writers would change their minds as well. One, Francis Hopkinson, became a signer of the Declaration of Independence, two others actively involved in the revolution. $2,500.

For an understanding of this dramatic change by the colonists, especially in Massachusetts, item 58 is a bound collection of five Intolerable Acts from 1774. Of course by 1774, the Stamp Act and other indignities had already driven the colonists to the brink of revolution. Taxation without representation had led to the Boston Tea Party by that time. Rather than looking for a way to smooth over the conflicts, the British came down hard on the citizens of Massachusetts. The first four of these acts punished Bostonians by closing the Port of Boston until the East India Company was paid for the spilled tea, changed the colony's royal charter, required citizens to quarter British troops, and gave accused colonial officials the right to have their trials held in England. The fifth sounded much more liberal - it provided for freedom of religion and restored French civil law in Quebec as well as extending its boundaries. However, this graciousness to French Canadians was seen as a slap in the face of the British colonists, rather than newfound sympathy for the ethnic French of Quebec. The British attempt to put down recalcitrant colonists ended up only fanning the flames of revolution. 18,500.

Here is an unusual piece. Item 1 is a personal album of pressed Flowers of Colorado, created in 1877. The creator used an album produced by Marcus Ward & Co. of London and Belfast to press specimens of flowers and trees into the book's 50 leaves. The plants displayed are native to Colorado. $400.

Item 10 provides a look at the Louisiana Purchase from the French side, with an important bit of geographical history. The title is Histoire de la Lousiane et la Cession de cette Colonie par la France aux Etats-Unis... or History of Louisiana and the cession of that colony by France to the United States. The author is Francois de Barbe-Marbois, who helped negotiate the sale on the part of France. A most notable point in his book is the statement that the Louisiana Territory ended at the 110th meridian, which would place the boundary in the Rocky Mountains. America would use the purchase to claim land rights all the way to the Pacific coast. $1,500.