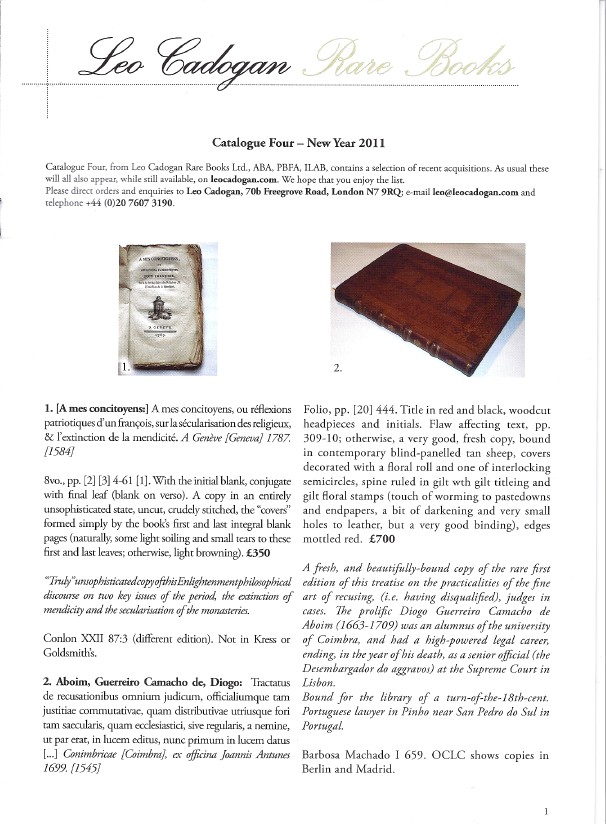 Leo Cadogan Rare Books has issued Catalogue Four - New Year 2011. There must undoubtedly be a word that describes the type of material Cadogan offers, though I struggle to find it. Though a London bookseller, most of this material comes from the Continent. Latin and French are the predominant languages. Material generally ranges from two to four centuries old. Subject matter varies, but it is generally something for the intelligentsia, not the common man (not that the common man did much reading back then). Topics include theology, law, science, and other intellectual pursuits. Many come from universities or their students. So, whatever the word is that describes printed and written material with these attributes is the one that describes Cadogan's catalogue. Now, here are a few specific examples.

Item 34 is a manuscript of notes from lectures at the University of Leuven from the mid-18th century, Tractatus de aere. Tractatus de electricitate. This constitutes a study of air and electricity. The lectures discuss the compression, elasticity and expansion of air, the barometer, and other attributes. The topic of electricity is particularly interesting as this was an era of great discovery in the field. The notes discuss the Leiden jar, a device that stores static electricity, something of a precursor to the battery that would be invented a few decades later. Priced at £580 (British pounds, or roughly US $928).

Item 62 recounts an interesting legal case from Bordeaux in 1795. It seems that two young men from the Institute of Deaf-Mutes had been charged with forging bank notes. There was a desperate shortage of funds at the time and the two forged the notes to satisfy a very basic need - eating. They were quickly apprehended, and one of the young men suffered a mental breakdown and died. The second, L. Baudonnet, was tried. At trial, when asked why he forged the note, Baudonnet responded (in French and in writing), "I was hungry; I wanted to eat." When told it was against the law, he replied that he knew nothing about the law. The law could be awfully harsh in those days, but not totally heartless as young Baudonnet was acquitted. He wrote in response that he would carefully study the laws and teach them to other deaf-mutes so they would not make the same mistake. £350 (US $560).

Item 22 is another Decret de la Convention Nationale… this one dated June 27, 1793. It provides for the shaming of criminals, in addition to their prison sentences. The convicted was to be taken to the town square and tied to a post, with a sign over his head giving his name, profession, and crime. Depending on the seriousness of the crime, the period of public humiliation varied from 2 to 6 hours. Considering this was the time of off-with-their-heads, public humiliation was probably a relief for some of the accused. £90 (US $144).