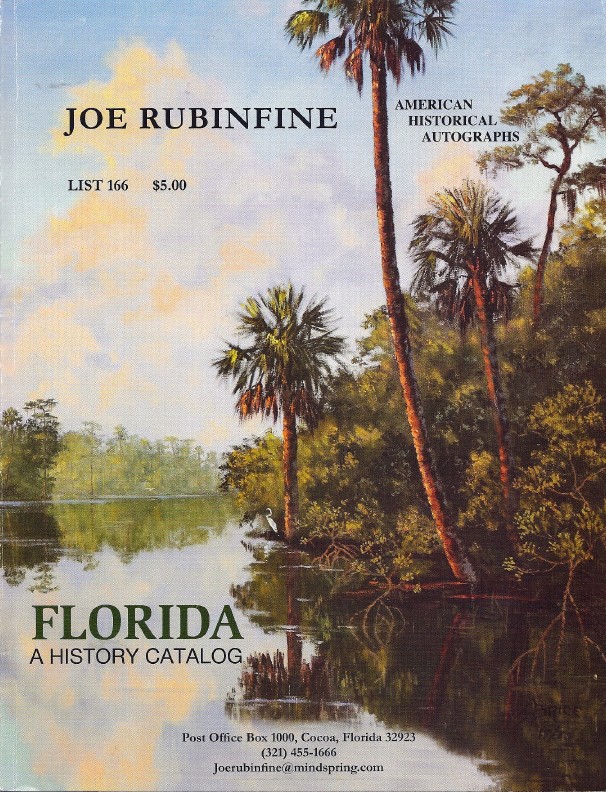 Joe Rubinfine, American Historical Autographs, of Cocoa, Florida, has issued a catalogue devoted to his home state:  Florida A History Catalogue. This is indeed a catalogue that will appeal to anyone interested in the history of Florida. It is filled with letters and other signed documents that take the Sunshine State from its early days as a Spanish colony, to its East and West divisions, through English possession, back to Spain, then American territory, Seminole Wars, American statehood, Confederate state, back to an American state, and development from distant backwater to winter haven for northerners and full time home for millions of Americans. It is a history unlike that of any other American state.

Rubinfine presents this history through documents. Some are signed by various leaders of the state, but many come from ordinary individuals, resident, visitors, and soldiers who fought the wars, notably against the Seminoles or on both sides during the Civil War. This is a look at Florida history through the eyes of participants more than historians. Here, now, are some of those documents which document Florida's history.

While Florida was primarily settled by Spain in its early days, it was ceded to England after the French and Indian War. It did not participate in the American Revolution, and as British loyalists, particularly from nearby Georgia, found themselves at increasing risk, many immigrated to the safer British possession to the South. Unfortunately for them, the British ceded Florida back to Spain after the American Revolution. Once again, these loyalists found their lives disrupted, their wealth and possessions often lost. The British tried to provide some support for their unfortunate loyalists, but it hardly compensated their losses. Apparently, some believed a rumor that the Governor of the Island of Dominica, John Orde, had promised them free land, 30 acres for each man, 20 for each woman, 10 for each child. It was not to be. Item 10 is a document signed by Patrick Tonyn, a British General and Colonial Governor of East Florida during the American Revolution. Written in 1791, 8 years after the end of the Revolution, Tonyn proclaims that he never heard of such an offer while he was Governor, and due to his position, he surely would have had such an offer been made. Tonyn then cites a letter from Dominca Governor Orde where he says, "I pity them from my soul," and promises to provide small parcels from unsold land to those who are deserving, and other provisions as possible, but no large land offers were made. Priced at $2,500.

In 1819, Spain ceded Florida to the United States, opening the way for Americans to visit the sunshine territory. Some sought out the warmer climes, particularly in winter, for health reasons. One such young man was Ralph Waldo Emerson, still an unknown individual in his mid-20s. Item 23 is a letter from January 1827 from Emerson to his step-grandfather Rev. Ezra Ripley of Concord, Massachusetts. Emerson describes St. Augustine, where he stayed, noting that it has attracted those seeking their fortune based on the expectation that a canal would be cut across Florida at that location, while others are invalids and public officers. There is little for many of them to do, Emerson noting that St. Augustine is "the Castle of Indolence." Nonetheless, he explains, he has found what he sought - "warm weather." $6,500.