181 Books and a Martian from the Manhattan Rare Book Company 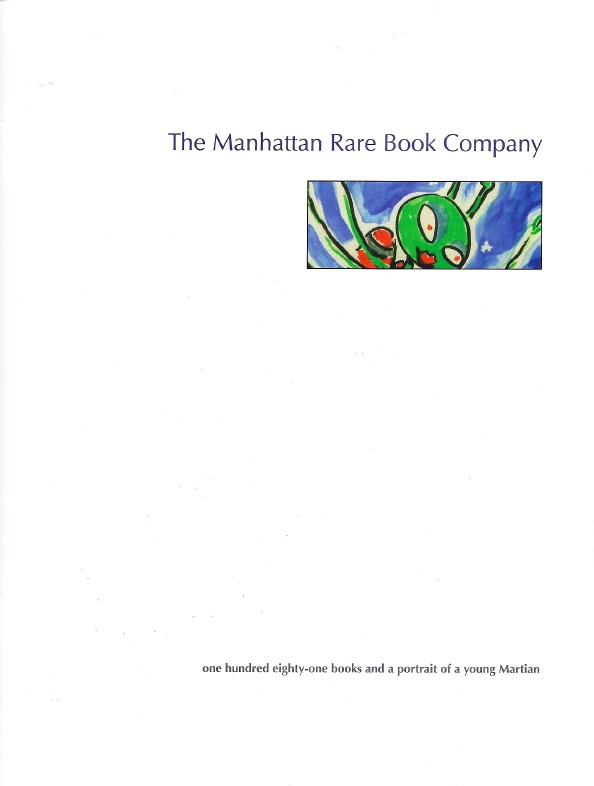 The latest from the Manhattan Rare Book Company comes with an odd title:  One hundred eighty-one books and a portrait of a young Martian. There, they have mentioned that there are 181 books in this catalogue and you are asking about just one item, the Martian. This one is a signed lithograph of a Martian by writer/artist/film director Tim Burton, who appropriately directed Mars Attacks! and many better known films. His Martian looks more like a cross between a dragonfly and a flying ant, nothing that would make you want to visit the red planet anytime soon. The lithograph is signed by Burton (item 18, priced at $1,350). Now that this is out of the way, we can turn to some of the books found within this catalogue.

Item 7 is a first edition of the book that has been voted "the most significant English language play of the 20th century" by the British Royal National Theater. It is written in French. That absurdity fits with the play itself, En attendant Godot, which translates to Waiting for Godot. Author Samuel Beckett later translated the work he wrote in French to English. Godot's meaning remains a mystery, with various interpretations offered of the strange tale of two men waiting for Godot, who never arrives. It is symbolic of something - Beckett never revealed just what - but this lack of clarity didn't stop it from being the best English play of the 20th century (hopefully, the Royal Theater would have had enough sense not to name it the best English play of the 17th century had it been written then). Published in 1952. $3,400. Item 8 is a signed copy of the same. $22,000.

If you would just as soon wait on purchasing Godot, here is another item that's almost as strange in its own way. Item 135 is Isaac Newton's The Chronology of Ancient Kingdoms Amended, published in 1728. We think of Newton as the ultimate scientist, employer of scientific thinking, and yet this book, published the year after he died, is based more on theological assumptions than scientific method. In it, Newton uses astronomical observations to create a timeline for ancient history, including claims that Solomon was the world's first king and his temple the first temple. Those claims, unlike most of his scientific ones, have not been borne out. $3,000.

During the Second Boer War, the London Daily Mail sent a young correspondent to South Africa to report back to its readers on the action. The Boer Wars were unsuccessful attempts by descendants of the early Dutch settlers of South Africa to overthrow British colonial rule. The young man sent by the Daily Mail was Winston Churchill, and as was his way, Churchill managed to get himself in the middle of the action. He was captured by the Boers, perhaps intentionally, and then managed an escape. His adventures are all recounted in London to Ladysmith via Pretoria, published in 1900. Churchill's reports on the war gathered him a certain amount of fame back home, enabling him to be elected to Parliament that year. Churchill's successful entrance into politics would serve his country quite well four decades later in Britain's darkest hour. Item 33. $1,200.