Americana in Printing and the Mind of Man from William Reese 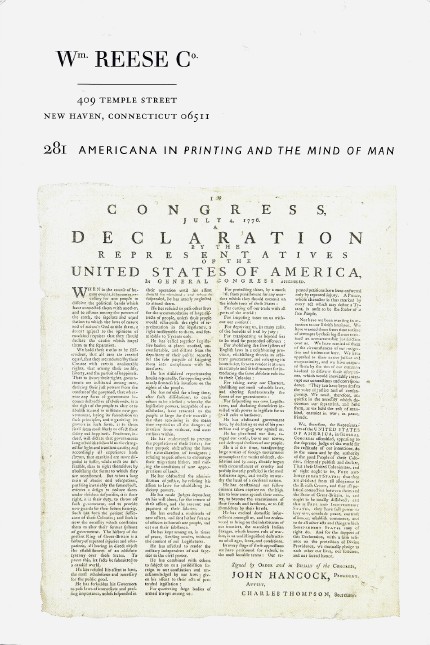 Americana in Printing and the Mind of Man.

The latest catalogue from the William Reese Company is entitled Americana in Printing and the Mind of Man. Printing and the Mind of Man was an exhibition put on in London in 1963 to show the importance of printing on the advancement of western civilization, beginning with the time of Gutenberg. In 1967, a catalogue of the books displayed was published, which was revised and republished in 1983. It formed a bibliography of the most important books to the development of western civilization.

Americana does not form a substantial part of the works in PMM. Indeed, it begins before anyone in Europe even knew America existed. However, America would become a critical part of the west, and from the standpoint of books, it appears first as European Americana - European books pertaining to the discovery of this land - and then through books written and published in America. It is these items that Reese's catalogue has focused upon. Here are a few of the 32 important books being offered.

We will start with an item that is not specifically Americana, but is related because it covers the whole world. It is the earliest obtainable edition of the best account of the first journey around the world, that of Ferdinand Magellan. Magellan's journey took his five ships and 265 men west, through the Straits of Magellan and into the Pacific Ocean, which he so named because of its calm waters. However, while Magellan is noted for the first circumnavigation, he never actually made it. He was killed by natives in the Philippines. In fact, very few of his men survived to complete the journey. By the time they made it back home, there was only one ship and 18 men left alive. One of those men was Antonio Pigafetta, an Italian nobleman. He kept a journal of the trip which was first published in French in an abridged account, and then this fuller edition in 1536, Il Viaggio Fatto da Gli Spagnivoli a Torno a'Lmonde. It is supplemented by an early edition of the account of the voyage by Maximilianus Transylvanus. Maximilianus was not a participant in the voyage, but was assigned by the great chronicler of travels Peter Martyr to interview the survivors. Priced at $225,000.

Within the next century, there were many visits to the Americas along with numerous settlements in the New World. Here is a description of one part of North America:  A Description of New England:  or the Observations and Discoveries, of Captain John Smith…in the Year…1614, published in 1616. Smith is best known for the Jamestown settlement in Virginia and Pocahontas, but he was also the man who gave New England its name. This very rare book was the principal guide used by the Pilgrims when they came to America to settle in Plymouth. Item 6. $125,000.

Move forward another century and the east coast of North America is now well settled with primarily British colonies. These colonies are now producing their statesmen and even early scientific figures. Here is a man who was both, and a leader in each. This, of course, would be Benjamin Franklin, and if he is better remembered today as a government leader and as a printer, in his time, at least in Europe, he was better appreciated for his scientific research. Everyone knows the story of his experiment (don't try this yourself) of flying a kite into lightening. Franklin was studying the at the time barely understood phenomenon of electricity. His findings were published in 1751 in Experiments and Observations on Electricity, Made at Philadelphia in America by Mr. Benjamin Franklin… This book is often considered America's first great scientific contribution, giving Franklin an international reputation a quarter of a century before the Revolution. Item 10. $67,500.