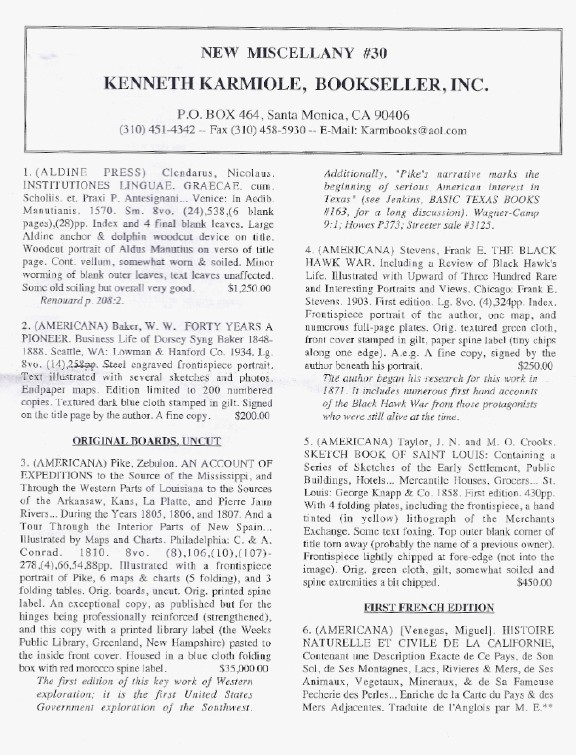 A new miscellany from Kenneth Karmiole.

Kenneth Karmiole, Bookseller, has issued a new catalogue, a New Miscellany #30. It is no surprise that a collection with such a name would contain a wide variety of material. It really can't be described, but here are a few samples of the material found within.

It was America's second major expedition into its largely unknown interior, following that of Lewis and Clark. Item 3 is Zebulon Pike's An Account of Expeditions to the Source of the Mississippi, and Through the Western Parts of Louisiana… Pike's first trip, in 1805, was an unsuccessful attempt to the find the headwaters of the Mississippi. What was more notable was his second journey, into what was the southwestern part of the newly acquired Louisiana Territory, Lewis and Clark having traveled northwest. It brought him to today's Colorado (location of what is now known as "Pike's Peak"), and other areas along the fringe of today's American Southwest. However, areas such as New Mexico and Arizona were still south of the Mexican border in those days, and Pike and his men were held for a while by Mexican authorities for entering their territory. The Mexicans were concerned that Pike was a spy, a fear not totally without merit, though America was able to win his release. Pike's account was published in 1810 (a few years ahead of Lewis and Clark's official account of their journey). Offered is a first edition. Priced at $35,000.

If Zebulon Pike had visited this area in 1848, he would not have had to worry about being held by Mexican officials. At the conclusion of the Mexican War, Mexico ceded this territory and much more to the United States. The following year, Charles Wright joined in the first of two surveying expeditions into this new territory of America. He collected plant specimens on behalf of Asa Gray, America's foremost botanist of the time. Item 79 is Gray's Plantae Wrightianae Texano-Neo-Mexicanae:  an Account of a Collection of Plants Made by Charles Wright… published in two volumes, 1852-53. $750.

Item 92 is what Karmiole describes as the "first documented fall of a meteorite." The book is Della Caduta di un Sasso Dall' Aria Ragionamento… by Domenico Troili, published in 1766. A fiery meteorite streaked through the Italian skies, witnessed by Troili, a clergyman, and many others in the Italian countryside. Troili examined the remains of the meteorite and gathered eyewitness reports to write this account. However, Troili got the object's origin wrong. Rather than coming from space, he believed it had been shot up in the air from the subterranean regions through a large volcanic explosion. He evidently believed that what comes down must have first gone up. $1,250.

Conspiracy theorists, those who believe that secretive, powerful organizations rule the world, are common today. They are not, however, anything new. Most conspiracy theorists today seem to focus on bankers or wealthy industrialists as the power behind the throne, but a couple of centuries ago, the target was more often the Masons. Indeed, the Anti-Masonic political party in the United States managed to elect a couple of state governors in the 1830s. Item 87 is Proofs of a Conspiracy against all the Religions and Governments of Europe, carried on in the secret meetings of Freemasons, Illuminati and Reading Societies, by John Robison, published in 1797. Robison was a noted English physicist, who invented the siren. In his later years, he drifted deeply into conspiracy theory. $650.

Item 2 is a biography of a man you may not know:  Forty Years a Pioneer. Business Life of Dorsey Syng Baker 1848-1888. This biography begins when Baker was already 25-years-old, having moved from his childhood home in Illinois and a brief stint as a doctor in Des Moines to the Pacific Northwest. He became involved in numerous business ventures in Washington and Oregon, ranging from steamships and railroads to mercantile stores and banks. He was a well-respected and successful businessman when he died in 1888. This biography of his business career was published the year he died by Dorsey's son W.W. Baker. His greatest business involvements came in the city of Walla Walla, and the bank he founded in 1869 with his brother-in-law, Baker-Boyer Bank, is still active in that community today. This copy is signed by the author, a successful businessman in his own right. $200.