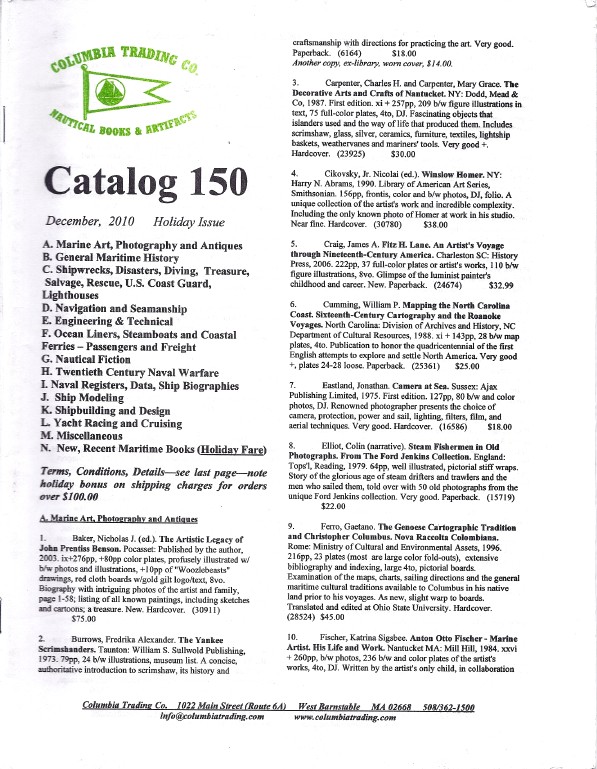 The Columbia Trading Co. issued a catalogue for this recent holiday season, which is still filled with good books even if we are now settling back to the real workaday world. Columbia Trading focuses on nautical works - lakes, rivers, and of course, the seven seas, or however many of them there are. This is a catalogue for those fascinated by water and those devices that float upon it. Here are a few of the over 600 moderately priced items being offered in their Catalog 150.

What was life traveling the seas like almost two centuries ago? Here is a first-hand look from Captain Basil Hall, published in six volumes 1831-32:  Fragments of Voyages and Travels. Including Anecdotes of Naval Life; Chiefly for the Use of Young Persons. Hall joined the Royal Navy in 1802, and his career placed him in command of several ships. He also participated in the Battle of Corunna, either a stalemate or British defeat by Napoleon in 1809, depending on one's point of view. Better days lay ahead for England in its battle with the French commander. Hall's Fragments continued to several more volumes published later, the Captain proving to be a prolific writer. Item 184. Priced at $245.

Item 115 presents a different look at life at sea from a man who sailed all over the world a bit later in the 19th century. His name was David Cowans, and he was a civilian sailor rather than a naval officer. He sailed across the oceans and on the Great Lakes, experienced shipwreck, deprivation and disease. It was not an easy life, but Cowans, enticed by the calling of the sea at a young age, chose the hard life. His book, published in 1871, is titled Anecdotes of Life on the Ocean. Being a Portion of the Experiences of Twenty-Seven Years' Service in Many Parts of the World. $75.

Fishermen have been dealing with depletion of stock for longer than many realize. Item 584 is Spencer Baird's Report of the Condition of the Sea Fisheries of the South Coast of New England in 1871 and 1872. It was published by the United States Commission of Fish and Fisheries in 1873. It begins with the observation/warning, "There are very few fish indeed now, to what there used to be." The report looks at the causes of depletion of stock. $95.

Item 148 is a massive history of the Civil War:  National History of the War for the Union. Vols. I, II and III Civil, Military and Naval, by Evert Duyckinck. It has a stated publication date of 1861, which is either in error or Duyckinck was a seer as it covers events up to the war's end in 1865. Duyckinck was actually better known as an important literary critic and publisher prior to the war, attempting to make inexpensive copies of great works as well as lesser-known books available to the public. This large history includes some illustrations by Thomas Nast, later famous for his cartoons of Boss Tweed. $375.

Item 365 presents an alphabet soup of naval warfare. The title is My Mystery Ships, by Gordon Campbell, published in 1929. Campbell was an English vice admiral, and he was in charge of several Q-Ships (also known as "mystery ships") in their battle against German U-Boats during the First World War. The U-Boats, better known as submarines today, were wreaking havoc on British shipping during the war. Merchant ships were sitting ducks for the sneaky U-Boats under the sea. The "mystery ships" were an answer. They were designed to look like ordinary merchant ships, but contained hidden heavy arms. They would lure the German U-Boats to the surface for an attack, whereupon the Q-Ships' guns would be revealed and the submarines sunk. They succeeded in sinking 12 of the German U-Boats, three of the kills being commanded by Campbell. $25.

Item 504 and 505 are a couple of the books written by the indefatigable Lady Annie Brassey, who spent much of her time sailing the world on a large yacht with her family and servants. She was married to an M.P., had five lovely children, and a very luxurious boat. She wrote travelogues of her adventures which were very popular back home with people who could not afford such trips themselves. Item 503 is her A Voyage on the Sunbeam. Our Home on the Ocean for Eleven Months, published in 1881. Item 504 is a signed copy of Around the World in the Yacht Sunbeam, published in 1879. Each is priced at $35. Annie took one trip too many, coming down with malaria off the coast of Australia in 1887. She died and was buried at sea.