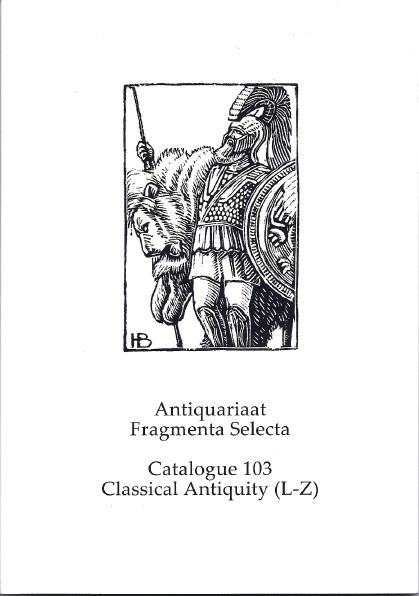 Classical antiquity from L to Z.

Antiquariaat Fragmenta Selecta has issued their Catalogue 103 Classical Antiquity (L-Z). In November, we reviewed the first half of this collection, letters A-K. There is no shortage of material in the second half of the alphabet. This catalogue contains almost 1,700 items (1,699 to be exact). Offered are books about classical antiquity, which covers primarily Greek and Roman times, but Byzantine times as well, that long era once thought of as the Dark Ages where most progress was taking place outside of Europe. The period covered by these works ends with the dawning of the Renaissance.

With this many books, you are sure to find ones of interest if your focus is on antiquity. You will find everything from broad based descriptions of the times to niches so finely targeted that only someone involved in deep scholarly research would ever think to write on the topic. These are books for learning, some for collecting, and almost all within reach of the most modest of budgets. Here is a small fraction of one percent of the items being offered.

Thucydides was one of the earliest Greek historians, following the so-called "father of history" Herodotus. Thucydides lived in the fifth century B.C. and was an early participant, and later observer of the greatest battle of ancient Greece, the Peloponnesian War. This was a 27-year long fight between Athens and Sparta, that eventually led to the defeat of Sparta's democratic neighbor. Thucydides was a wealthy Athenian, but after a lack of battle success early on, he went off into a sort of exile/retirement, where his personal wealth enabled him to devote his time to writing the war's history. Unfortunately, or perhaps fortunately for an Athenian, he probably did not live to see its conclusion as he stopped writing before it ended. Thucydides is noted as perhaps the first objective, scientific historian, focusing on observable causes and effects, rather than attributing events to the will of the Gods. Now, if you are looking for more than a one-paragraph summary of the life of Thucydides, item 1405 is A Historical Commentary on Thucydides, by A. Gomme, A. Andrews, and K.J. Dover, published 1970-79. This contains four volumes of information about the noted historian. Priced at €160 (euros, or about $212 in U.S. currency).

Pythagoras is best known today for right triangles and beans, but he was a well-rounded philosopher from the century before Thucydides. He led a religious sect, but he was very much a seeker of knowledge, a person who believed that much could be learned about the world through mathematical formulas. Pythagoras was also a learned astronomer, and that aspect of his knowledge is described in item 868 - Die Astronomie der Pythagoreer, by B.L. Van der Waerden, published in 1951. This is actually a look at the astronomy of the Pythagoreans, his followers, as it is hard to know with any kind of certainty what exactly were the views of Pythagoras himself. His society was secretive, and the philosopher did not write any books. Much of what is believed about him is based on the beliefs of his followers, and the writings of other Greeks, ancient to us, but still frequently a century or two removed from their subject. €35 (US $46).

We noted that some of these works hit very finely tuned niches. I knew there was lots about the Gods in Greek poetry, but who knew about Dogs in Ancient Greek Poetry? Saara Lilja's treatise was published in 1976. Item 62. €26 (US $34).

We know all about the battles, killings and tortures of ancient Rome, but where can you read about mundane items like farm tools? How about in Farm Equipment of the Roman World, by K.D. White, published in 1975. Item 1632. €150 (US $199).

Lucian of Samosata is not as well remembered as many of the great writers of Greek and Roman times. Perhaps we prefer the serious philosophers to the popular and witty writers of the day. Lucian was a novelist, speaker, perhaps what passed for a comedian in the second century. His writings included parodies of the styles of really ancient writers, the old Greeks who were already considered ancient 1,800 years ago. If you would like to read some of his works, item 130 is The Works of Lucian of Samosata. It was published in 1949, kind of old but not ancient. €60 (US $79).

For those seeking a very old copy of an ancient work, item 75 is The Roman History Written in Latine by Livius. Despite the title, this is an English translation, published in 1686. Titus Livius was an ancient Roman historian whose life spanned from the first century BC to the first century AD. He wrote about Rome, from its beginnings seven centuries earlier, to the time of Augustus, when Livius lived. €850 (US $1,129).