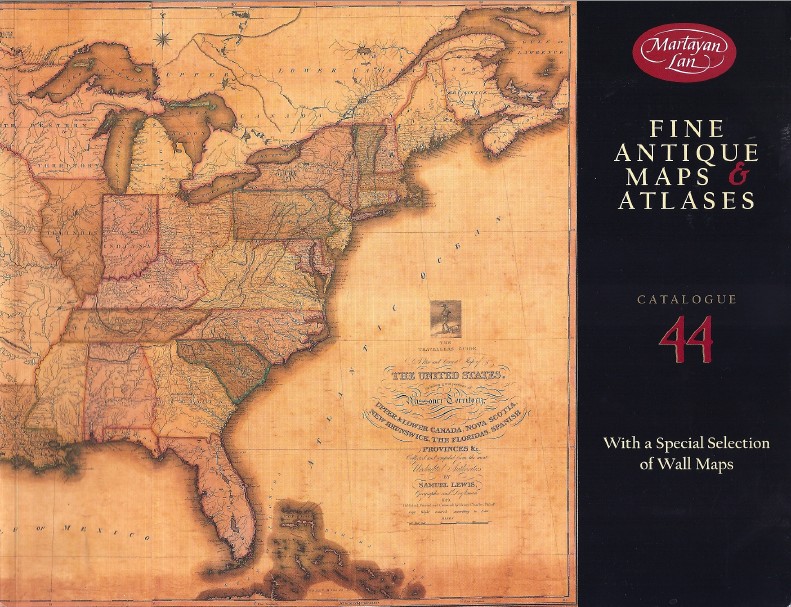 A collection of fine maps and atlases from Martayan Lan.

Don't use these maps for directions. You will surely get lost. These are old, some dating back to the 16th century. Considering the data available at the time, these mapmakers did a fine job, but their image of the world, and the New World in particular, was very different from what we know today. Nonetheless, it is fascinating to look back at the world as earlier generations imagined it, and as the great mapmakers depicted it to their curious customers. Included in this latest collection are many wall maps, some of which combine art with knowledge, or perhaps, "knowledge." Here are a few.

Edmund Halley is probably best remembered as an astronomer, particularly for the comet which bears his name. However, Halley was also a more broad based scientist and explorer as well. One of his contributions to both science and exploration was his map/chart circa 1702, Carte Generale De Toutes Les Costes Du Monde Avec Un Indice Des Variations Magnetiques…  This is the Mortier, Amsterdam (French) version of his chart published in English in 1702 (it probably was published shortly after the English edition, though there is a chance it was earlier). In 1701, Halley published a chart showing magnetic declinations for just the Atlantic, while this map, based on observations Halley gathered from others, also covered the Pacific. Magnetic declinations, plotted in contour lines on Halley's chart, show areas with the same angles between true and magnetic north. This can help voyagers plot the most direct route, and Halley believed it would also enable them to determine longitude. Item 11. Priced at $45,000.

Item 23 is another seafarer's chart from a man better known for other things. It is the French printing (circa 1781-83) of Benjamin Franklin's map of the Gulf Stream. Franklin's charts are rare as they were printed for use by sea pilots, as opposed to being commercially published. Franklin had served as Deputy Postmaster General for the colonies in the 1760s when he discovered that some of his postal ships were taking two weeks longer to return from Europe than other merchant ships heavily laden with goods. Franklin had the whaling Captain Timothy Folger draw him a map of the Gulf Stream so that ship captains would know what area to avoid. The first version of his chart was published in England in 1769, but in the early 1780s, with the Revolution taking place, Franklin was stationed in Paris. That is where this edition was printed. $33,500.

Item 26 is the 1641 Jansson/Hondius Amsterdam map America Septentrionalis, North America. The Dutch were still very much involved with America at the time, but no one new much about it beyond the Atlantic and Gulf Coast. Outside of this fairly accurate coast, the map does have a reasonable portrayal of Hudson Bay and some lakes in the general vicinity of the Great Lakes. Most of the interior of the continent is a blank. This map also contains one of the earliest depictions of a myth that would last for almost a century - that California was an island. A notation on this map perhaps explains how this myth came to be so widely accepted. It refers to a Dutch captain who obtained a map depicting California as an island from a captured Spanish ship. In other words, it was the Spanish who were responsible for this misconception. $8,500.