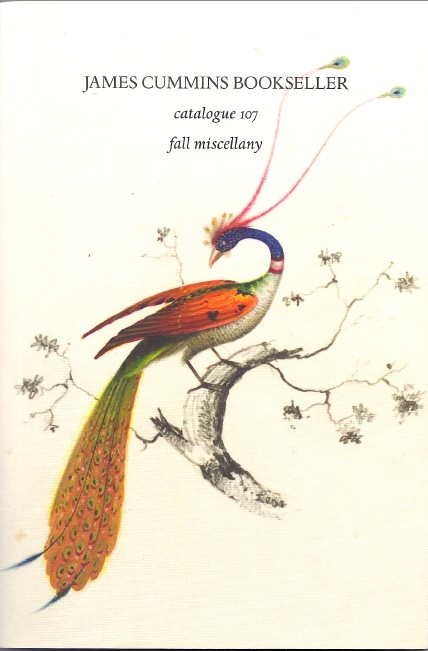 James Cummins Bookseller has issued Catalogue 107 Fall Miscellany. We are a bit late for fall, but bookseller catalogues are generally intended to last for a long while, so this is acceptable. A few months late isn't too bad for books that can be centuries old. Cummins offers a varied collection, including books, manuscripts, and ephemera, and this is top tier material. It's worth the wait.

For those with the largest budgets, and this first item is not typical of the prices here, there is one of the most important books for the founding of that new nation, the United States of America. The year was 1788, and three of America's Founding Fathers wanted to convince their countrymen to adopt the new constitution their representatives had hammered out in Philadelphia. So, James Madison, Alexander Hamilton, and John Jay began publishing a series of essays to make their point. They were published anonymously, and although we now know who the authors were, there is still some uncertainty as to who wrote each essay (though we can make an educated guess based on styles). These essays were compiled and published in two volumes, and as you probably know, the book was given the name The Federalist. Its influence on the public was likely critical in the adoption of the republican form of government America enjoys today. Item 80. Priced at $195,000.

A few years later, a neighbor to the south drew up its first constitution too. Item 83 is Constitucion federal de los Estados Unidos Mexicanos… published in 1824. These were the other United States, the United States of Mexico, and they had just won their independence from Spain. This was their first constitution, and thereby the first independent constitution for today's American Southwest, including the states of California, Arizona, New Mexico and Texas, then part of Mexico. $6,500.

A century-plus later, it would be time for an amendment to the American constitution. Item 23 is an inscribed copy of Woman Suffrage by Federal Constitutional Amendment, by Carrie Chapman Catt. Ms. Catt had succeeded Susan B. Anthony as head of the National American Woman Suffrage Association. This was published in 1917, and women's long battle for equal rights at the polling place was finally nearing its end. Three years later, victory was at long last achieved. This copy is inscribed by Ms. Catt to New York Congressman Frederick C. Hicks. Hicks left his wife's deathbed, at her insistence, to cast a crucial vote in Congress for the amendment. Naturally, his was a vote in favor, but had he voted the other way, the amendment would have fallen short of the two-thirds vote necessary for adoption. $2,500.

Eleanore Roosevelt was certainly a supporter of women's rights too, yet her answer to whether a woman could become President is perhaps a bit more cautious than one might expect. Item 99 is a signed carbon typescript of an article she wrote for Cosmopolitan around 1936. Pointing to the classic difference between the words "can" and "may," Mrs. Roosevelt writes that, "a woman can be elected President, in all probability some time a woman will be, but she MAY not, in my opinion, be elected at the present time, or in the near future." Fair enough, as 74 years later this has still not come to pass, but she seems to discourage the idea, saying that a vast majority of women are not quite objective enough in their work or impersonal enough in their contacts. She sees no reason to push women into a role untenable for them due to prejudice. The need for a President who can lead a spiritual, moral, and mental reawakening is so great she did not feel it wise to add the complication of a change of sex to the office of president. $5,000.