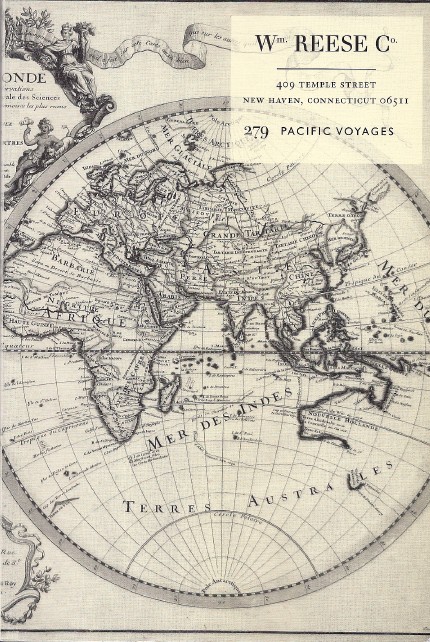 The William Reese Company has released a catalogue of Pacific Voyages, their 279th catalogue over the past three-plus decades. The Pacific Voyages tended to be among the later ones, though certainly the area was visited as early as Magellan (it's hard to perform a circumnavigation without passing through the Pacific). Indeed, some of the earlier visitations were part of circumnavigations with primary purposes elsewhere. However, the Pacific was the site for the three voyages of perhaps the most noted of explorers, Captain James Cook. Naturally the various Japan and Far Eastern explorers, as well as those headed to Australia, visited the Pacific. Finally, came one of the last larger areas to be explored, the North American Pacific Northwest, not seriously charted until the late 18th, early 19th century. Books, images, manuscripts and maps from these various voyages will be found in this newest Reese catalogue, including many of the most important works related to this area.

We will start with one of the earliest, and most important of Pacific voyages. It was that of Sir Francis Drake, the first Englishman, and only the second captain to circumnavigate the globe, following Magellan. Drake could be labeled a major explorer, and his claims to the west coast of North America had a lasting effect on claims to the land for centuries to come. However, Mr. Drake was far more interested in the loot he could capture from the Spanish ships and colonies in South and Central America than in advancing science. He was a privateer, operating with the blessings of Queen Elizabeth, who got half the spoils of Drake's piracy. Still by the time he returned home, Drake had claimed the west coast of North America, or as he called it "Nova Albion" (New Britain), for his country, and it would provide a basis for British claims for centuries. Item 45 is Le Voyage de L'Illustre Seigneur et Chevalier Francois Drach… This is the first French edition (1613) of the account of Drake's voyage generally attributed to Francis Perry. Priced at $40,000.

The circumnavigation of another Englishman, George Anson, had much in common with that of Drake, though it came a century and a half later. Anson set out for South America with six ships, his intentions the same as those of Drake - steal from the Spanish. His venture turned out to be a disaster for most of his men, though not for Anson. Only one of the ships made the complete trip, others being forced back at the Horn, or sinking in the treacherous waters. Most of his men died, primarily from disease; others went through horrific survival journeys to get back. Item 13 is an account of one of these:  A Voyage to the South-Seas, in the Years 1740-41, by John Bulkeley and John Cummins. Bulkeley and Cummins served on the Wager, one of Anson's supply ships that didn't make it. She ran aground just past the Horn, and the survivors suffered horrible deprivations. They had to make their way back along the coast to Brazil, dealing with a lack of food and supplies, and the natives, and eventually making their way back to England. Only a few ever made it back, while Anson, who continued on with just one ship left, captured a wealthy Spanish vessel and returned to England a wealthy man and hero. $6,000.