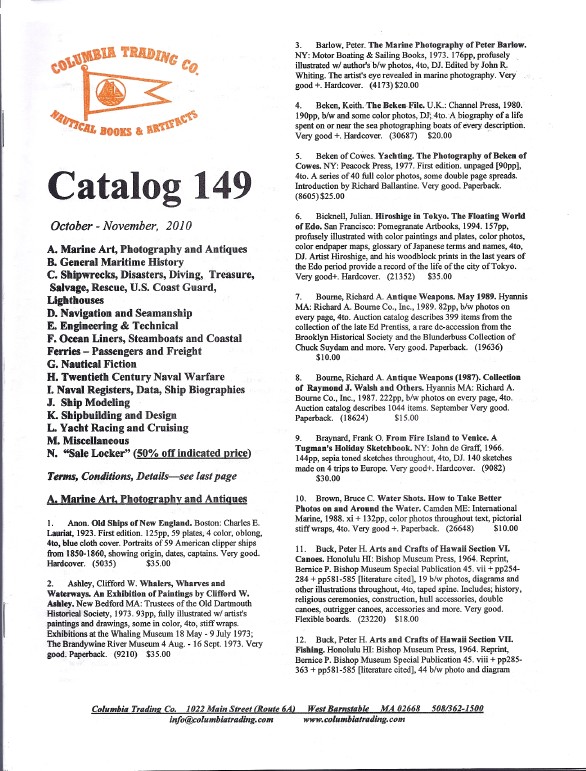 Books from the seas from Columbia Trading.

The Columbia Trading Company has issued Catalog 149 of Nautical Books and Artifacts. Located on Cape Cod, at the heart of America's seafaring travel since the Pilgrims dropped by on their way to Plymouth, Columbia Trading offers up 652 items related to travel by ships, primarily on the open seas. This is affordable material, very few pieces priced beyond two digits, some appropriate for a nautical collection, others suitable for reading and learning. So let's open the pages, port to starboard, and take a look at a few items inside.

It took 150 years for this journal to make it to print, but when it did, it allowed the world's greatest military power to look back at a time when its European counterparts controlled the seas. Item 33 is Journals of Two Cruises aboard the American Privateer "Yankee" in the War of 1812, published in 1967. The United States had practically no navy when British outrages on the high seas, notably the impressment of American sailors, led the two nations to war. The British controlled the seas, and America was virtually helpless to defend itself from ocean-based attacks. President Madison turned to America's merchant and other ships for help. Private ships were authorized to engage in "privateering," a polite word for legalized piracy. These privateers were able to harass British shipping in a manner similar to the way the Royal Navy was able to disrupt American shipping. This journal of life on board the "Yankee," sailing out of Bristol, Rhode Island, gives an inside view of life on a privateering ship during America's first war. The author is "A Wanderer," generally believed to be Noah Johnson. Priced at $25.

Speaking of Noah, the Noah with no last name must have been the first sailor. Item 276 is David Fasold's 1988 book The Ark of Noah. Fasold studied a site in Turkey he believed contained fossilized remains of the Arc. His claim was controversial even among believers as it was not located on Mount Ararat. He makes his case in this book. In time, Fasold became dubious of his earlier beliefs, repudiating those claims, though others continued to support the theory. $40.

Noah's journey is not alone among alleged travels that stir debate between those who believe versus those who consider it legend. Pre-Columbian visits to America are also a subject of much debate between believers and nonbelievers. Item 135 is The Vinland Map and the Tartar Relation, by Skelton, Marston and Painter, published by the Yale University Press in 1965. The Vinland Map and accompanying text purport to be a circa 1440 document which shows Viking visits to North America in the 11th century, long before Columbus. The map shows the edge of a landmass west of Greenland, which could only be North America. The map first surfaced in 1957, its provenance hidden. It was purchased for Yale University, which promoted this study published in 1965. The claim drew plenty of suspicions. Questions were raised about such items as language and depictions of other lands, which many believed reflected much later usage and understanding. Others questioned the age based on scientific studies of the ink and parchment. Nonetheless, if it is a forgery, it is a very good one. Many believe it authentic, and Yale regards it as a still unresolved debate. It should also be noted that there is other evidence that may point to pre-Columbian Viking visits to North America, meaning that claim will still be debated regardless of whether this map is real or fake. $20.

The skepticism concerning the map led to a conference the following year, where contrary viewpoints were enunciated. Item 187 is a report from that conference, Proceedings of the Vinland Map Conference, which was not published until five years later in 1971. Item 186. $20.

As long as we are running the border between fact and legend, here is another fascinating title: Legendary Islands of the Atlantic: A Study in Medieval Geography, by William H. Babcock. Published by the American Geographical Society in 1922, this work describes the various real and phantom islands believed to lie in the Atlantic during the early era of discovery. Naturally, Atlantis takes a primary role, but there were many others, such as the mythical St. Brendan's Island, which early maps displayed in the far northern Atlantic waters. Item 43. $25.

Item 258 is the anonymously written General Information on Grain Loading, published by the National Cargo Bureau in 1962. It covers such things as U.S. Coast Guard regulations for bulk grain cargoes. This is thrown in just in case we have led you to believe that every nautical work is filled with excitement and intrigue. $15.

Does this work belong in this catalogue: Hindenberg. An Illustrated History, by Rick Archbold, published in 1994? Wasn't the "Hindenberg" a dirigible, flying through the air, rather than floating on the water? Well, technically, these hydrogen (dangerous) and helium filled oversized balloons were airships, that is air + SHIPS. I guess that sort of qualifies. The "Hindenberg," of course, was the giant ship that crashed and burned in New Jersey in 1937. Item 340. $35.