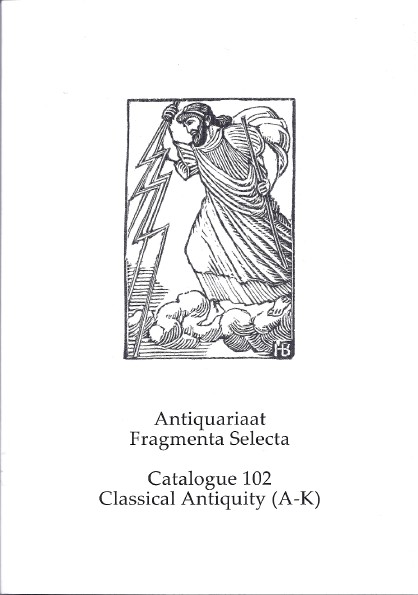 Classical Antiquity - A to K.

Antiquariaat Fragmenta Selecta of Amsterdam has issued their Catalogue 102 Classical Antiquity (A-K). There are obviously lots of works about classical antiquity as this collection includes almost 1,600 items just to get to the letter "K." There are very few books that cost much here, lots of material designed more for learning than building a collection of expensive collectibles. Books come in many languages - English, French, German, Latin, and Greek. You are sure to be fluent in at least one (we will focus on books in our fluency - English). For a trip back in time, way back in time, there are hundreds of books awaiting you.

It's not easy to construct an intimate biography of someone who died 3,350 years ago, what with issues of access to contemporaries and the like. Nevertheless, Joan Fletcher has done a remarkable job with the challenge in Chronicle of a Pharaoh. The intimate life of Amenhotep III. Amenhotep's long reign, almost 40 years, was a time of prosperity, great art, and tranquility. Many rulers try to build their reputations through military conquests, but there seem to have been few wars during his reign, though he was said to have personally killed 100 lions with his arrows. His time is now regarded as perhaps the peak of ancient Egypt in terms of power and prestige. His rule ended with his death around 1350 BC. Fortunately, many tablets and statues from Amenhotep's time have survived (as has his mummy), enabling Fletcher to write a year-by-year account of his life. Item 905. Priced at €20 (euros, or approximately US $28).

Hannibal did not make his reputation during peacetime. He was a military leader from Carthage, and he retains the reputation as one of the most brilliant military strategists ever, even though he has been gone almost 2,200 years. Hannibal attacked the mighty Roman Empire and held it to a standstill for years, at times coming close to conquering Rome, but eventually was driven away. Still, his achievements against the mightiest empire the world had known remain a testament to his superior skills, and he would be highly respected, though unloved, by his enemy. Item 1122 is Hannibal's campaigns. The story of one of the greatest military commanders of all time, by T. Bath, published in 1981. €8 (US $11).

Item 549 is a book about Roman history and ruins near Cirencester, a town in England about 100 miles from London. In the day, it was something of a center, one of the larger Roman cities in England. Back then, it went by the name of Corinium. The title of the book is Early Roman Occupation at Cirencester, by J.S. Wacher and A.D. McWhirr. It was published in 1982, but there are still many ruins yet to be excavated in the area. €22 (US $30).

Item 169 is a copy of Aristotle's Nicomachean Ethics. This English translation is a little closer to being contemporary than, say, a copy printed today, as it was published in 1926, only around 2,300 years removed from his lifetime, rather than 2,400. In this work Aristotle describes his standards of ethics, all logically deduced from a few basic principles. It is remarkable that such a high standard of ethics could come from such an early time, but ancient Greece was a remarkable place. €11 (US $15).

So, now that we know about Aristotle's deepest thoughts, let's get to some surface issues. What did the man look like? This is not easy with a man who died more than 2,300 years ago, or more than 2,100 years before the invention of photography. Item 935 is Fulvio Orsini's imagines and the portrait of Aristotle, published in 1960. Orsini was a 16th century historian and archeologist who built a collection of antiquities. This work describes 16th century books that contained portraits of ancient leaders and notable personalities. €8 (US $11).

Item 408 is a book about Julius Caesar by a political leader of much later times: Histoire de Jules Cesar, published in 1865-66. The author was Napoleon III, Emperor of France, and its last monarch. He was the nephew of the first French notable with the Napoleon name, President of the Second French Republic, and Emperor of the Second French Empire after staging a coup. He was something of a Caesar in his time, though at least he was able to escape to exile when overthrown, rather than being assassinated. His work does tie together two leaders who were admired by their friends, but hated by their enemies, whose careers ended in defeat. €175 (US $245).