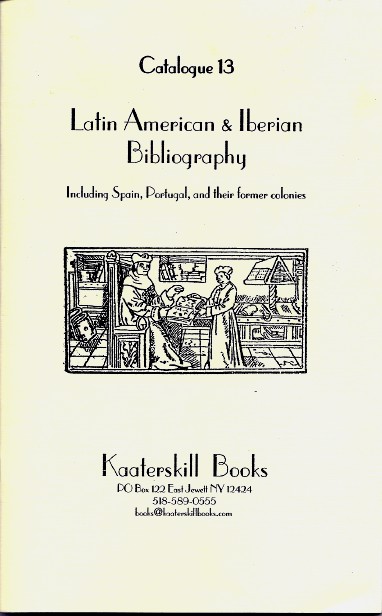 Kaaterskill Books, the rural upstate New York bookseller that comes up with surprising catalogues for a dealer in such an out of the way place, has come up with another: Latin American & Iberian Bibliography, Including Spain, Portugal, and their former colonies. A year ago, Kaaterskill gave us a catalogue of Latin American works, so perhaps it should not be surprising that they would come up with a collection of bibliographies from the area as well. This catalogue includes standard bibliographies as well as secondary sources, such as catalogues of library collections, exhibitions, and auctions of collections related to the Spanish and Portuguese speaking world. Those who collect these areas will find the books in this catalogue of great use in building their collections.

Item 18 is the major work of the man, Kaaterskill notes, is "considered the father of Cuban literature and Cuban bibliography," Antonio Bachiller y Morales. The title is Apuntes para la historia de las Letras y de la instruccion Publica en la Isla de Cuba (Notes on the history of literature and public instruction in Cuba), published in three volumes, 1859-61. The book contains numerous articles on education, literature, the press and more in Cuba, along with a bibliography of books printed in Cuba from 1724 to 1840. Priced at $750.

Apparently one of the lesser-known side effects of the brief rule of Mexico by the French imposed Emperor Maximilian was the removal of some great collections of Mexican books from the country. Maximilian ruled from 1864 until 1867, when Mexican nationals overthrew and later executed him. Item 4 is an auction catalogue from Leipzig in 1869, Catalogue de la riche bibliotheque. It consisted of 7,000 items either printed in Mexico or with a connection to that country. Jose de Andrade had built his magnificent collection over 40 years when he sold it to Maximilian, who used it as the foundation of his Imperial Library. When Maximilian was killed, Andrade removed the library, smuggling it on 200 mules to a port where it was taken from the country. Most of the books were purchased at the auction by San Francisco businessman, printer, historian and collector H.H. Bancroft, whose collection would later be given to the library of the University of California at Berkeley (now the Bancroft Library). $400.

That same year, another great auction of Mexican works was held in London. The catalogue from this auction is Bibliotheca Mejicana. It included almost 3,000 items and ran for 7 days. It came from the library of Father Augustin Fischer, who had been Maximilian's chaplain. Item 83. $500.

It took a little longer for this collection to come to market, but in 1880, there was another auction in London entitled Bibliotheca Mexicana. This included 1,290 items which Kaaterskill describes as "[o]ne of the most spectacular auctions of Mexican books and manuscripts ever." It had belonged to Jose Fernando Ramirez, another official during Maximilian's rule. He ran the Imperial Academy of Sciences and Literature. He escaped to Germany, his collection evidently intact, where he died in 1871. Item 214. $500.

The island of Sardinia has long been known as part of Italy, but for around 400 years, it was controlled by Spain. Spanish rule came to an end in the early 18th century and it since has been mostly under the dominion of Italian states. Item 259 is Bibliografia Espanola de Cerdena, an 1890 bibliography of books and manuscripts by Sardinian authors or published in Sardinia during the period of Spanish rule. Item 259. $350.

Item 284 is a controversial work from the Spanish bibliographer Francisco Vindel: El primer libro impreso en America… In it, Vindel claims to have found a book printed in America before what is generally accepted as the first American book (from 1539). Vindel had in his possession a small prayer book, lacking a date, name of printer, or place of printing. Vindel believed it had been printed from a small press brought to Mexico by Pedro Varela, son of Seville printer Juan Varela. Its primary purpose was to print playing cards, but Vindel believed the book used Varela's type and local paper, dating the work to 1532-1534.