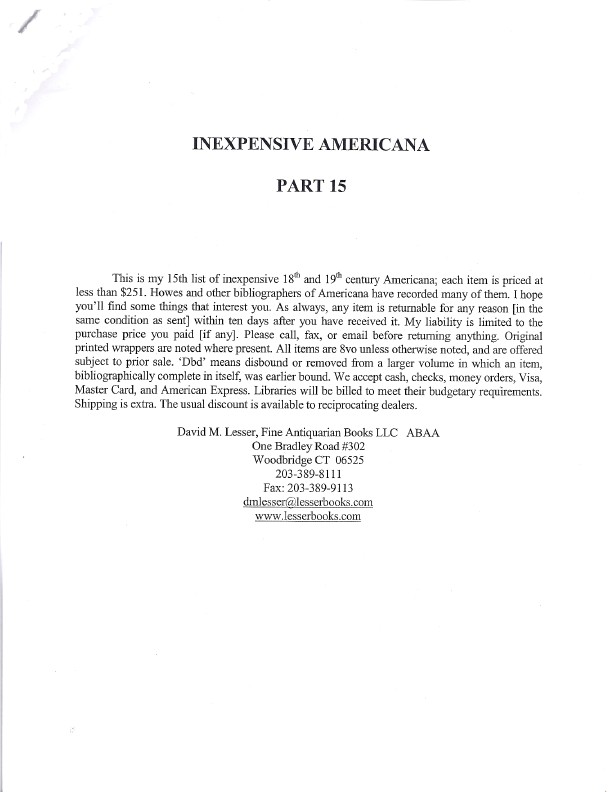 David M. Lesser Fine Antiquarian Books has issued another in their series of Inexpensive Americana, this being Part 15. The formula is typical for a Lesser catalogue - primarily pamphlets and material not quite full book length in size from 18th and 19th century America. The difference from a typical Lesser catalogue is nothing here is priced over $250, and most is priced lower. It is an opportunity to find interesting material relating to America's early days, without breaking your personal bank account. Here are a few of the 350 lower priced items being offered for sale.

Missouri's Blair family was somewhat unusual for their times. Frank Blair, Sr., and his two sons were strongly pro-Union, and anti-slavery, at least its expansion (Senior freed his slaves during the Civil War, late in the game but before any requirement to do so in loyal Missouri). Francis Blair, Jr., was a loyal Missourian who served in the late 1850s as a Republican Congressman, and raised a regiment for the Union during the war. His brother, Montgomery, served in Lincoln's cabinet as Postmaster General. However, despite their strong pro-Union sentiment, and distaste for slavery, the family was not enamored of black people. Frank, Jr., would later run for vice-president on the Democratic ticket in 1868, and some believe his racist statements were no help to the party's nominee. Some of his attitudes were revealed a decade earlier in Washington, in this Speech of Frank P. Blair, Jr., of Missouri, on the Acquisition of Territory in Central and South America, to be Colonized with Free Blacks, and held as a Dependency of the United States, given in 1858. Rather than back-to-Africa, Blair's plan was to emancipate but then deport America's blacks to South America. In his speech, he describes blacks as "a class of men who are worse than useless to us." Item 32. Priced at $75.

Theophilus Fisk was an odd combination of opinions - very liberal in terms of supporting the working men toiling under atrocious conditions in the factories of the North, yet an apologist for slavery in the South. It seems that Fisk believed white workers in the North were worse off than slaves in the South, and looked at Northern abolitionism as hypocrisy. All well and good, but why he couldn't see both the condition of white workers in the North and black slaves in the South as evil is a mystery. Instead, it made him a defender of slavery, and maligner of the people who suffered in chains in the South. Writes Fisk, in The Bulwark of Freedom, an 1836 speech at the Universalist Church in Charleston, South Carolina, abolition would "…turn an indolent horde of lazy drones loose upon the community. You would have to build an alms house in every street, and a penitentiary or gallows, at every corner." One can only wonder why Fisk considered the people who were performing the labor the "lazy drones," rather than those who sipped mint juleps on the veranda. Item 120. $250.

Of course there were those who opposed slavery and sought better conditions for blacks. One was Gerrit Smith, a very wealthy man who turned to philanthropy and radical causes, such as abolition and women's suffrage. Three times he was a minor party, abolitionist candidate for president, but his actual public service was limited to one term as a Congressman from New York. Item 285 is an unusual piece for Smith. It is a speech from his congressional days that has nothing to do with abolition or similar causes. Today it might sound more like it was coming from Libertarians or the Tea Party - Keep Government Within its Limits. Speech of Gerrit Smith, on the Pacific Railroad… given in the House in 1854. Smith supported the Pacific Railroad, but as a private, not public project. After voicing support he comments, "Nevertheless I would not have Government either own, or build the road." $75.

If you have ever wondered why it is so difficult to get a murder conviction when there is no body, you should read The Trial, Confessions and Conviction of Jesse and Stephen Boorn, for the Murder of Russell Colvin, and the return of the Man supposed to have been Murdered. Colvin, the Boorns brother-in-law, whom they apparently disliked, had disappeared. After many years absence, and a strange dream by their uncle, the people of Manchester, Vermont, became convinced Colvin had been murdered by the Boorn brothers. Each eventually was said to have confessed, though likely under duress of to avoid the death penalty. It mattered not. Both were convicted and sentenced to death (though Jesse's sentence was commuted to life). Then, with the help of someone who read about the case in New Jersey and knew of a Russell Colvin in his hometown, Colvin reappeared in Manchester, six weeks before Stephen was to be executed for his murder. Oops. This book was not published until 1873, 54 years after the trial, but author Leonard Sargeant had been part of the Boorns' defense team. Item 270. $150.

With voting about to begin for this year's election, we will conclude with a piece which shows that dirty campaigning is nothing new: Infidelity and Abolitionism. An Open Letter to the Friends of Religion, Morality, and the American Union. What this really was was an attack on John C. Fremont and the Republicans ahead of the election of 1856. Fremont, we are told, seeks to destroy the Union and "true religion," while advocating social equality with blacks and free love. Then comes the worst charge of all - he is politically affiliated with "unsexed females." Let that be a lesson. Do not pander to the unsexed female vote if you hope to get elected. Evidently there just aren't enough of them, or maybe they don't vote. Fremont got whipped. Item 127. $250.