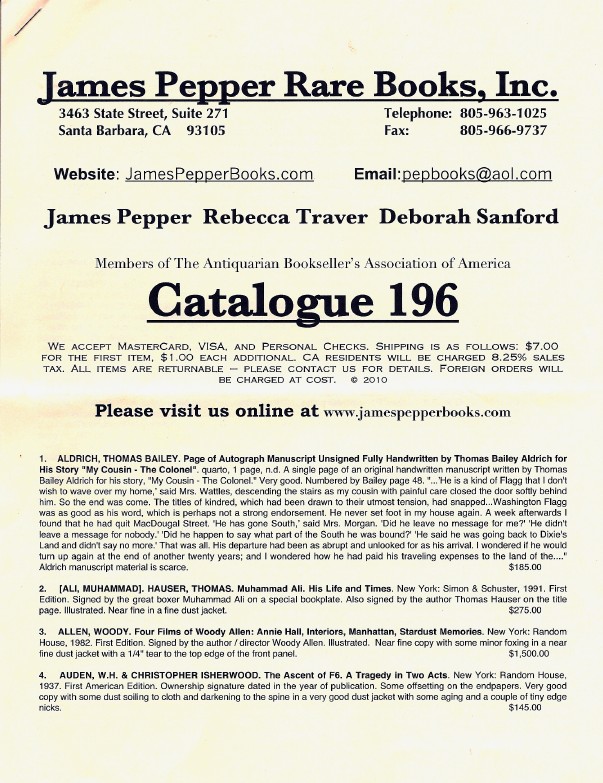 James Pepper Rare Books has published their Catalogue 196. Their specialty is material related to film and theater, literature, science and detective fiction, with other types of material scattered within. Many of the pieces are signed or inscribed by the writers or actors and actresses who played the parts on the big screen. Here are some of the items offered in this latest selection.

Item 129 is an inscribed copy of what is undoubtedly one of the greatest pieces of 20th century American literature: The Grapes of Wrath. For those who think times are tough now, this book is a reality check. Offered is a third printing of the 1939 first edition of John Steinbeck's novel about a family of dust bowl "Okies," driven from their Oklahoma farm to the fields of California in search of work. This copy is inscribed by Steinbeck to actress Dolores Costello, whose married name at this time was Dolores Vruwink. Costello was a notable silent film actress, at one point married to John Barrymore (she is Drew Barrymore's grandmother), who made a reasonable transition to sound movies. Priced at $5,000.

Item 84 is the autobiography (with a little help) of a man essentially known for one role, with which he became virtually synonymous: I Was That Masked Man, by Clayton Moore with Frank Thompson. Of course, that masked man was the Lone Ranger, and while others appeared in that role at various times, it was mostly Moore behind that mask when the western hero galloped across our TV screens in the 1950s. Moore again appeared in the public eye in the 1980s when the owner of the rights to the Lone Ranger sued to prevent Moore from appearing in character (Moore made his living doing personal appearances as the Ranger by then). It won Moore much public sympathy and the right to resume his role. His book was published in 1996 and signed by Moore in 1997, as well as inscribed by Thompson. Moore died two years later at the age of 85. $275.

Item 91 is an original script for the 1969 Broadway play Minnie's Boys, written by Robert Fisher and Arthur Marx. "Minnie's Boys" were none other than the Marx Brothers, and Arthur was Groucho's son. Shelley Winters played the role of Minnie while Lewis J. Standlen was Groucho. The play was a comedy based on the brothers' early days. Offered is a special copy - Groucho's personal one. Groucho served as a consultant for the play, and his copy of the script has several of his notations and corrections along with his signature (twice). $3,000.

While Groucho was getting laughs, Hoagy Carmichael was making music. So many classics from the 30s and 40s were written by Carmichael, Georgia on My Mind, Up a Lazy River, Heart and Soul, Rockin' Chair, and the one he is most associated with, Stardust. Item 22 is An Exhibition Honoring the Seventy-Fifth Birthday of Hoagy Carmichael, which event occurred in 1974. It was published by the Lilly Library, Carmichael having been a graduate of the University of Indiana. $125.

Item 115 is a signed letter from a man better known for his inkblots than his writing. Hermann Rorschach was a psychiatrist, and on March 21, 1922, he wrote a letter concerning a patient to fellow psychiatrist Eugene Bleuler, a colleague of Freud. It was certainly one of his last letters as the 37-year-old Rorschach suffered from a burst appendix and died just 11 days later. He is famous, naturally, for his Rorschach test, which asks people to describe what they see in an inkblot, what they see helping to determine the mental makeup of the person. $7,500.