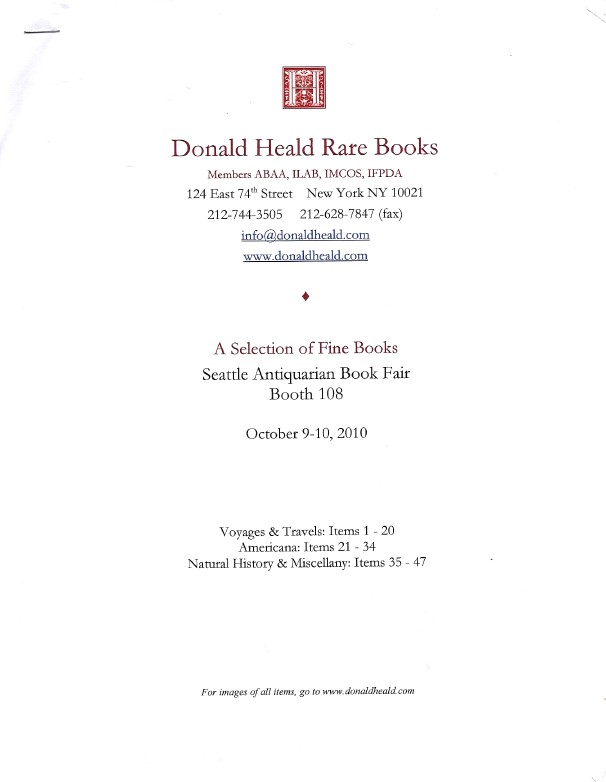 From the Seattle Book Fair.

Donald Heald Rare Books recently printed A Selection of Fine Books for their participation in the Seattle Antiquarian Book Fair. The New York bookseller specializes in fine and important books. This collection is divided into three categories: Voyages & Travel, Americana, and Natural History & Miscellany. Here are some samples covering each of these fields.

Captain James Cook's final journey was a combination of success and failure, triumph and disaster, but it left us with a much greater understanding of the world we inhabit. His major goals included returning the South Sea islander, Omai, earlier taken to England, back to his home, and finding the elusive Northwest Passage. He succeeded at the former, failed at the latter. Along the way, he succeeded in charting much of the American Pacific coast and discovered Hawaii. That also proved his undoing, as Cook was killed by Hawaiian natives in a dispute over a boat, and his replacement, Charles Clerke, succumbed to illness a short time later. Item 3 is A Voyage to the Pacific… by Cook and Captain James King, who had to complete the narrative. Offered is the second and technically superior edition, published in 1785. Priced at $27,500.

Finding a northwest passage to the Orient was long an obsession in England. In the days before the Suez and Panama Canals, the journey was extremely long and arduous, requiring rounding either the African Cape or traversing the dangerous Magellan Straits below the tip of South America. A northwest passage, north of the Canadian mainland, would cut thousands of miles from the journey. Unfortunately, it is very cold up there, and even where there is water, it is often covered with impenetrable ice. Item 13 relates to what was the first of many attempts to find this passage by an Englishman: A vindication of the conduct of Captain Christopher Middleton, in a late voyage on board His Majesty's ship the Furnace, for discovering a north-west passage to the western American ocean, published in 1743. Middleton searched for an outlet from Hudson Bay, eventually going as far north as Repulse Bay, before being turned back by ice. He concluded there was no passage. Technically, he was wrong, but the long frozen winters have never made this a practical route to this day (though warming temperatures have finally begun to open the route for longer periods of time during the summer). Middleton's conclusion was not well received by Arthur Dobbs, a wealthy Irishman who had a competitive interest in finding such a route. Dobbs attacked Middleton, thinking the latter's conclusion would stop further searching for a route, to the Hudson's Bay Company's competitive advantage. He thereby accused Middleton of misconduct and accepting bribes from the Hudson's Bay Company. This is Middleton's response. $12,500.

Of course, there was always another way to travel America east to west - overland, by foot. Item 25 is the first account of America's greatest overland expedition by an actual participant: A Journal of the Voyages and Travels of a Corps of Discovery under the command of Capt. Lewis and Capt. Clarke [sic]… by Patrick Gass, published in 1807. Gass was an important member of the expedition, lifted to the rank of sergeant during the journey when another died, who had been commanded to keep a journal. What he was not supposed to do was publish his journal prior to the official account. That journal's publication dragged on for years, but Gass released his version early, the first published account by an eyewitness. $17,500.

Item 42 is the first octavo edition (1824-26) of what Heald describes as "perhaps the most celebrated flower book ever published," Pierre Joseph Redoute's Les Roses. Originally published in a folio edition, Redoute's work blurs the boundary between science and art. His aim was to accurately reproduce the roses he saw, but his drawings are so perfect and beautiful they are generally more recognized as works of art. Text, and many of the roses depicted, were supplied by Claude-Antoine Thory, a botanist and rose collector. $25,000.

Item 46 is the memoirs of Louis Comfort Tiffany (written with Charles De Kay): The Art of Louis C. Tiffany. Tiffany's stated purpose of the book was to enable his children to know more about their father's career, though he made copies available to friends and important clients. The book was an expensive production, worthy of the Tiffany name. His father founded the jewelry firm that bears the family name, but Louis was more of an artist, his specialty being stained glass. It is from his contributions that the company is also known for Tiffany glass. Along with his glass, Louis Tiffany was noted for architecture and interior design, once redesigning several rooms at the White House on behalf of President Chester Arthur. $12,000.