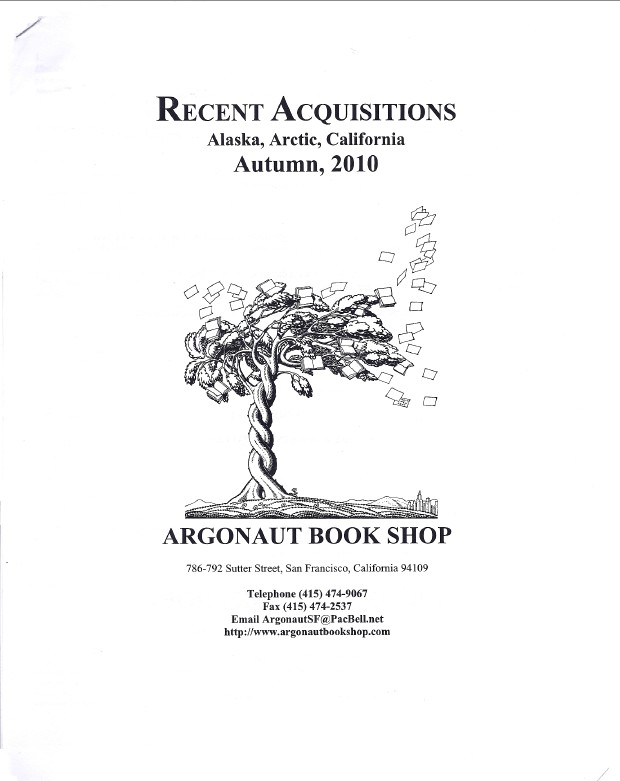 California and points north from the Argonaut Book Shop.

The Argonaut Book Shop of San Francisco, California, has issued a catalogue of Recent Acquisitions, Alaska, Arctic, California. Autumn 2010. That may seem an odd combination - sunny, warm California, with the cold of Alaska and the even colder of the Arctic. Perhaps with global warming Alaska will be the new California? Of course, anyone who has ever tried to swim in California's ocean beaches is well aware of the Pacific current's connection between Alaska and California. Now these two large states and the vast ice-covered regions of the north are connected again in the pages of this catalogue, though this is not a limitation. These regions are the primary focus of the catalogue, but there is other material to be found here as well. Let's take a look inside.

This may not be the account of the first person to reach the North Pole, but it is that of the first person to claim he reached the North Pole: My Attainment of the Pole, by Frederick Cook, published in 1911. Cook had been organizing a hunting expedition in the far north when he decided conditions were favorable to make an assault on the Pole. Along with two Eskimos and 26 dogs, he made his journey to the North Pole, or so he claimed. The lack of proof he brought back led to serious questioning of his claims, compounded further by evidence he may have faked an earlier claim to be the first to reach the summit of Mt. McKinley, and an alleged oil rights scam in which he participated later on. Meanwhile, Robert Peary claimed to have reached the North Pole a short time later (his claim is also now challenged) and his supporters were quick to point out the flaws in Cook's claim. Whatever the truth is, and few now believe his polar claim, Cook performed heroically in the earlier Belgian Antarctic Expedition and retained the lifelong admiration of Roald Amundsen, who unquestionable was the first to reach the South Pole. Item 77. Priced at $500.

It was the most devastating earthquake and fire America ever experienced, The California Earthquake of April 18, 1906. Item 148 is the report of the state earthquake investigation, two volumes plus the atlas, published in 1908. The earthquake was terrible, but damage caused by the ensuing fires was worse yet. This is probably the most extensive report on the awful event that struck San Francisco in 1906. It contains nearly 150 photographs and 25 maps. $1,500.

Item 171 is an even more immediate report of the earthquake, The Call - Chronicle - Examiner newspaper of San Francisco dated April 19, 1906. The city's three newspapers put out a combined edition the following day, printed across the bay in Oakland. The top headline reads, "Earthquake and Fire: San Francisco in Ruins." Subheadings include "no hope left for safety of any buildings," "blow buildings up to check flames," and "whole city is ablaze." $450.

Other than searches for the Northwest Passage itself, the greatest number of Arctic searches must have been designed to locate the lost Franklin Northwest Passage expedition. Sir John Franklin had already undertaken several explorations when he set out to find the Passage in 1845. He never returned. Over the next 15 years, numerous search parties traveled to the Arctic Circle north of Canada in hopes of finding the explorers. When England began to give up hope, Franklin's wife outfitted several on her own. By 1860, enough had been learned from natives and a few artifacts to realize they had not survived. However, it was believed that records from the expedition could still be found, and in 1878, an expedition headed by Frederick Schwatka went to search for them. No such records were ever located, but Schwatka's party did find the remains of the last survivors of Franklin's party, who starved or succumbed to the cold before finding rescue. Item 106 is the account of Schwatka's Search, Sledging in the Arctic in Quest of the Franklin Records. This 1881 book was written by William Gilder, an adventurous newspaperman who was the mission's second in command. The mission achieved a record for the longest sledging journey ever, 3,251 miles. $375.

You would have needed great faith in the Confederacy to be the original purchaser of item 76. It is a $500 bond issued by "An Act of Congress" of the Confederate States of America. That was a lot of money in those days, and 6% was a healthy rate of interest, though not for a loan this risky. Issued in 1863, the bond was not due until 1893. A 30-year bond, but it became worthless just two years later. $300.